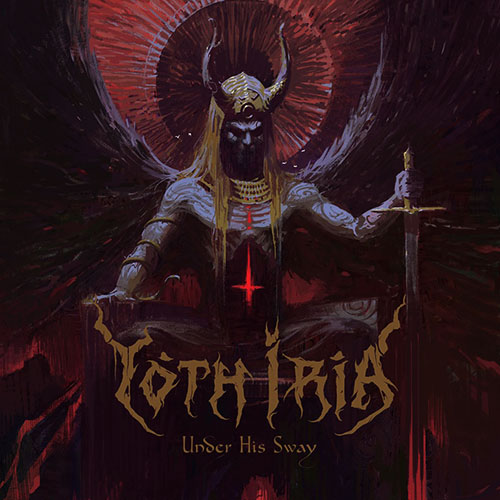 The year 2020 starts with the big comeback of Jim Mutilator (ex- ROTTING CHRIST, ex-VARATHRON) and Magus Wampyr Daoloth (NECROMANTIA, THOU ART LORD, ex-ROTTING CHRIST) with a new band under the name of YOTH IRIA. Together with George Emmanuel (LUCIFER’S CHILD, ex- ROTTING CHRIST) on guitar and the production of the EP named “Under His Sway”, with which YOTH IRIA are introducing themselves to us. We must also mention that drums are played by J.V.Maelstorm (THOU ART LORD, EMBRACE OF THORNS). We had great expectations from this release as Mutilator and Magus are two legends of the Greek Black Metal scene with participation in historical releases, having influenced thousands with their works.

“Under His Sway” includes two new songs and a cover of ROTTING CHRIST’s old classic “Visions of the Dead Lovers”. The title track that opens the EP starts quite melodic with piano, while it slowly begins to increase volume and rhythm turning into a Heavy/Black metal anthem with melodic guitars and Black Metal vocals by Magus. Next song is “Sid-En-Djinn” which is quite pompous and heavy with oriental elements and female vocals, while there are also some Doom metal influences. Nice rhythm that sticks in your head and drives you to start a vicious headbanging. ROTTING CHRIST’s cover version of ”Visions Of The Dead Lovers” doesn’t have any actual differences from the original except the obvious better production and the vocals by Magus.

A very powerful return for Mutilator and Μagus, as with “Under His Sway” they don’t follow the classic Hellenic Black Metal sound. Without repeating their past, they look forward and offer us a musical journey into Heavy/Black paths with an occult atmosphere. “Under His Sway” made us have high expectations for their upcoming debut album. Until then, let “Under His Sway” haunt you!!

All Out War – Crawl Among The Filth