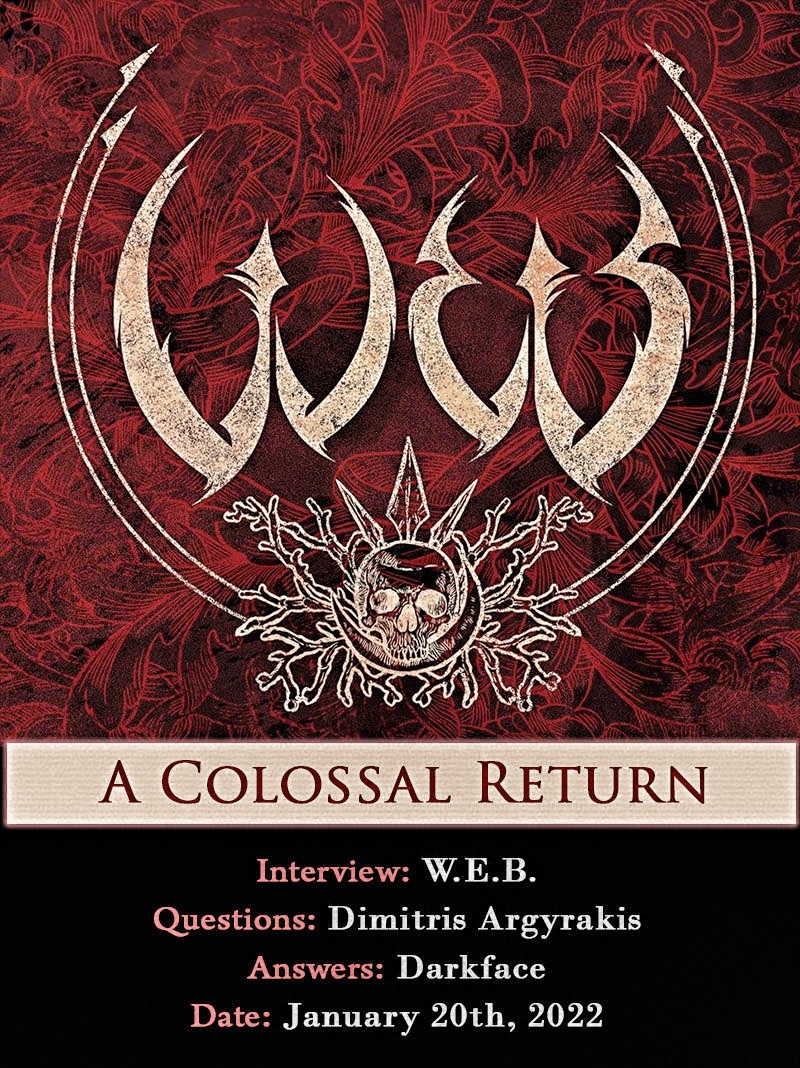 The announcement of W.E.B’s signing with the historic Metal Blade Records was a reward for a band that has remained true to its values for two decades! At the following interview, Sakis “Darkface” answers to all our questions about this agreement, giving us at the same time every detail about the new release of the band under the name “Colosseum”…

– Sakis, good evening from Crete! First of all congratulations for the new album. Since I’ve been following W.E.B. from the beginning, I consider it as the best work of your career! How do you feel that, from Sleazy Rider Records-that small Greek company in which you’ve released your debut album back in 2005, you find yourselves in one of the biggest and most historic metal labels like METAL BLADE?

Darkface: Good evening to you too, Dimitris. I am very happy to talk to someone who has been following us all those years from the beginning and thank you very much for that! Surprisingly, I had never done the report you just mentioned, probably because, along the way, the band was constantly setting new goals. Therefore, each of our steps has as a prerequisite what preceded it. But it is definitely very satisfying to see W.E.B. having an ever-increasing course, despite all these huge difficulties that we faced from time to time.

– I would like to learn more about the background of your agreement with Metal Blade. How exactly did things turn out?

Darkface: You know, we were in this scene before the band was formed, back in 2002. As you can understand, over the years, acquaintances, connections are created, etc. There are record labels with which we have a more personal contact and one of them is Metal Blade, with which Hel Pyre firstly met, when she was singing in the band of King Diamond. When the time came to start looking for a record contract for the “Colosseum”, as it was normal, we turned to some serious labels and Metal Blade showed the greatest interest. The most important thing is that they believed in us and our capabilities. Especially in the period of the pandemic, where there was a lot of uncertainty and it was very difficult for labels to sign new bands and finance them. So that honors us and motivates us to work harder to go even further.

– “Colosseum” is your first album on Metal Blade. How things have changed for W.E.B. after this deal?

Darkface: We soon found ourselves in front of a much larger public that bought records or similar stuff and the band was essentially re-established. We knew that through a much bigger record label something like this would happen and we also had some anxiety since for most of the people, who knew us the last 2 months, we were a completely new band. The acceptance of the material and our band were very good, the reviews of the album are awesome and Metal Blade has a team with which we work flawlessly, and they do for us what we expected them to do for each band that belongs to their roster.

– Was this album written and recorded in its entity during the quarantine? What was the process of composing the new tracks and how did the recordings go?

Darkface: We finished the recordings of the album luckily on the same day that the first quarantine was announced! We had started recordings at the end of 2019, then we left in January 2020 for the European tour with MELECHESH and then during February and March 2020 we went into the studio again to finish the album. It was finally released in 2021 instead of 2020, which was the original plan, but I am sure that everyone understands the reasons for this forced delay. The composition was basically an exchange of ideas between the members. Each of us from his home studio had the opportunity to present his ideas. When we came to the music part we started rehearsing the whole album intensively so we could clarify either weaknesses or gaps that each of us possibly had on the material and to be ready for the official recordings. It’s not something very special or different from what every band does.

– I firmly believe that for someone who is locked in his house (as now in the two quarantines) and has no contact with his band’s fans, going to rock/metal bars, and not doing concerts, those are not the ideal conditions to write good and inspiring music. It’s just my opinion and I know many will disagree. What is your opinion and the opinion of the other members of the band on this?

Darkface: I cannot agree or disagree with what you say. The reason is that, in order to write music, this must first come from your heart. Otherwise you are a custom music “supermarket”. A musician can compose a song at any time. But, what soul does this song has if it doesn’ t come out of you? If you feel that in case you dont’s write it, dont’s sing it, dont’s capture it to remain for ever, to be heard…this will drown you and you will not be able to breathe! In W.E.B.’s camp the songs were and will remain “with soul’’. Conditions do play a role, I agree. But these conditions will be transformed by the music inside us primarily to come out of the womb of our soul and to be born for the world to hear.

– Do you think that the quarantine benefited you or was a step back for the band? Do you miss concerts? Do you want to get back on stage and go on tour again?

Darkface: It braked us sharply, I would say. The program of 2020 for us was an album release and then a scheduled tour of 45 appearances during autumn. But it does not make sense to be consumed in scenarios that due to the pandemic did not take place. We would like as much as anything else to go on stage again. That is the meaning of any band’s existence, not just for W.E.B. Be sure to see us in 2022!

– Can you tell us more about the lyrical part of the new album? Is there a concept behind it? Why did the album get this name?

Darkface: The central idea behind the album is the instinct of bloodthirstiness and violence that occupies man. We constantly see people being violent with each other and around the violence that others are gathered as an audience and enjoy it. It is a reality that infuriates me, not so much that it exists, as that no one perceives or admits it. In a sense this happened in the Colosseum as well and kept the mob under control. People would love to have a Colosseum today. It is found on their screens, on their TVs, on their mobile phones, on their tablets and on their PCs. Anyone can open one of these devices at any time and find themselves in front of such a spectacle and instead of doing something essential for it, they would rather post the gif with Michael Jackson and his pop corn. Much of the album’s lyrics have to do with the mentioned above, but under a different point of view each time. Of course there are references to occult and vampirism in the other half of the album, but I do not think that this is surprising. This theme has always been present in our lyrics. However, I would like to mention that for the first time the lyrics are not exclusively my business, but Hel Pyre and Sextus Argieus Maximus have also written lyrics on the album.

– When W.E.B. announced that Hel Pyre joined the band, it was a pleasant surprise for many of the fans. How is the collaboration going with her? Did she participate at all in the compositions of the new album?

Darkface: I am very happy about that and I would like to mention that it was a great joy for us as well. Hel Pyre is generally very passionate about the arts, and therefore W.E.B. and so as to her band AFTERBLOOD. From the beginning of our collaboration it was what we call “100% hands on” in everything we do. We have great chemistry and this seems to me to be the case at the “Colosseum” where, in addition to lyrics, she has also offered music, especially in parts of the album where we were at a dead end, she gave the solution. Her presence is a catalyst for both the band and the album itself!

– From the beginning of the creation of W.E.B., the electronic/industrial element has always been quite strong in your releases (apart from the intense orchestral and gothic elements). Do you strongly believe this is also the case at the “Colosseum”? Do you still like industrial as a genre and add its elements at your projects?

Darkface: Yes, I really like industrial as well as gothic, I think it is always present in our music. It is not the main component of our music of course. It exists here and there from time to time. In “Jesus Heist”, if I am not wrong, it exists to a greater scale but in “Tartarus” let’s say it does not exist at all. In the “Colosseum” there are some industrial references to the track “Necrology” but as a trivia I will reveal to you that there are many industrial tricks, especially in terms of orchestrations everywhere in our music, but I should rather indicate them in order to be understood, haha!

Darkface: Our priority is to promote the “Colosseum” in every way. Currently the tours are canceled one after the other. For 2022 we had 2 tours in mind and one has already been canceled before it was even announced. So we are in constant communication with the agencies and our label on this issue. I can only tell you that we have a short tour with FLESHGOD APOCALYPSE in October 2022 in Italy, Germany, and Switzerland which I hope will not be canceled. In addition, in 2022 we close 20 years as W.E.B. and we want to do something special about it. So keep in touch!

– Would you like to add anything else? The last words are yours…

Darkface: : Thank you on behalf of everyone in the band for the hospitality and the interview. A big thank you to all those who supported “Colosseum” so far ,which is undoubtedly our most crucial album. You mean everything to us! Stay Dark!!