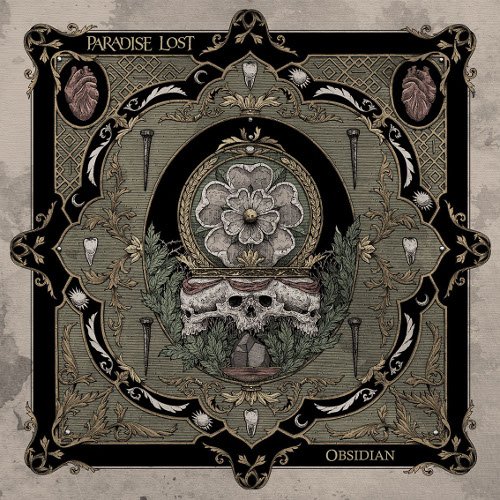 When you’ve been recording for thirty-two consecutive years, when you’ve already released fifteen albums (two of which are “Icon” and “Draconian Times”), when you’ve experimented with music as few artists did, when you have created and led a new sub-genre of the music you represent, when you just have nothing to prove to anyone (but yourself) and you announce the release of your new sixteenth album, what feelings could be created in the audience?

We are talking, of course, about the beloved band of the Greek audience (and not only), PARADISE LOST, who, after the successful “Medusa” album are here again with their new effort entitled “Obsidian”, which will be on the shelves of the record stores on May 15, 2020.

The band’s first two new singles, “Fall From Grace” and “Ghosts”, helped to raise our anticipation. The reason? The truth is that from “In Requiem” and on, LOST in each of their new release seemed to be increasingly burdening their sound, culminating in “The Plague Within” and “Medusa”,  where they had returned to their Doom / Death roots. This is not a bad thing at all, since we are talking about really good releases, but was this the sound that established the Halifax quintet among the “big ones”? The good thing is that PARADISE LOST never seemed to bother about that, something clearly evidenced by their constant experimentation. They always circulated what they felt. But what about “Obsidian”? Is it a natural evolution of its predecessor or is it something else that was worth all the aforementioned anticipation?

The answer is that “it is something else”. Something nostalgic, something that contains all these features that made the band so beloved, features in large doses. The “SISTERS OF MERCY” influences are here again, their switch to the Gothic Metal / Rock sound is obvious from the second single “Ghosts”. Nick’s vocals are heartbreaking in occasions, melodic to others, heavy and unbearable where needed, but mostly in the style we loved them the most. Greg’s guitars, as always unique and characteristic, give all this melancholy that usually governs a PARADISE LOST record but not the blackness of their previous two releases. Somewhere in the background is a ray of light. A gray that will not turn black but will probably open up even more, like the times we live in. A release with a clearer, more crystal sound, more hopeful than the gloomy-dark “Medusa”.

Songs like “Ghosts”, “The Devil Embraced” and “Forsaken” are reminiscent of the band’s good old days, while “Fall From Grace”, “Hope Dies Young” and “Ravenghast” show why PARADISE LOST didn’t have to prove anything to anyone, just to themselves. And they finally proved it!

Yes, after fourteen albums, thirty-two years later, PARADISE LOST don’t just maintain their myth, they confirm it with a release that wins you over from the first listening and in the fifth, you have already loved it and put it in your heart (the one that the British manage to break into pieces every time). Because they can!