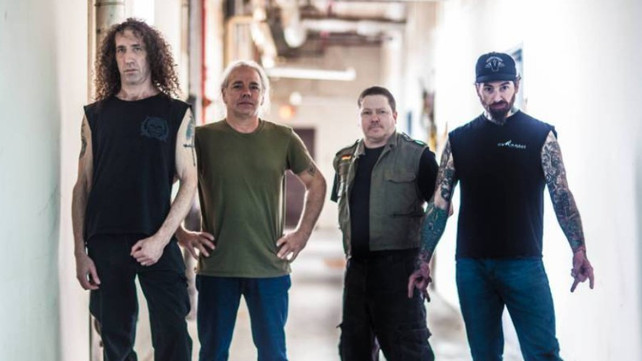 It would appear that legendary Thrash Metallers NUCLEAR ASSAULT, have once again called it a day. While no official reason has been given for the apparent split, their Facebook has vanished and their Instagram feed simply reads: “NUCLEAR ASSAULT: John Connelly, Dan Lilker, Erik Burke, Drew Burke 1985-2022”.

A photo of a gravestone appeared on their Facebook page before it was taken down completely.

The band formed after bassist Dan Lilker left ANTHRAX in 1984 and hit their peak of popularity during the late 80s following a run of critically acclaimed albums, including “Game Over” (1986), “Survive” (1988) and “Handle With Care” (1989).

The environmentally-conscious Thrashers split in 1995 and, save for a few shows in the following years, reunited properly in 2002 and released a new studio album “Third World Genocide” three years later.

Back in 2014, Lilker revealed that the band were considering calling it a day after recording a “killer album” and playing one final tour. “In 2015, it will be 30 years since Nuclear Assault solidified our lineup and started making a name for ourselves,” he said in an online post. “To commemorate this, the band will write and record another album and play some shows for a ‘final assault’. The live front will be of a limited nature due to people in the band having careers they can’t just walk away from. We will try to do whatever we can, especially in the summer, to get out there and thrash for everyone again. We want to make sure this album is really killer so we can go out with a big bang.”

While album never materialised, the four-piece released the “Pounder EP” in 2015, which featured “four killer old-school Thrash” songs written by the bassist and vocalist/guitarist John Connelly. The band continued to play occasional shows and made what was to be their final live appearance at UK Deathfest at London’s Electric Ballroom on September 3rd, 2022.

Truth be told, this also shouldn’t come as a surprise since Lilker said earlier this year that their show at Decibel’s Metal & Beer Fest would be their last U.S. show.

SUFFERING SOULS: “Incarnated Perfection” album is out and released new lyric video for “Punishment from Hell”.