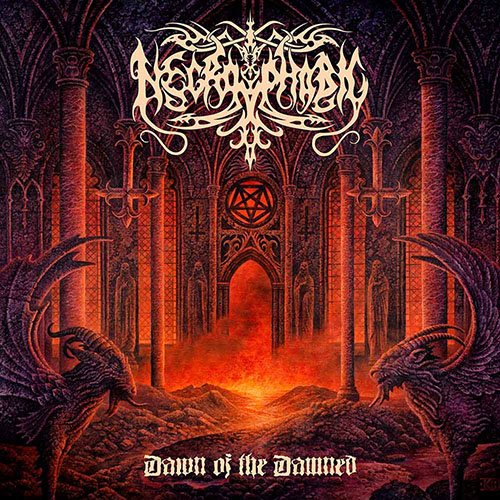 Although the Swedes NECROPHOBIC are one of the oldest Death/Black Metal acts, for some inexplicable reason they always lived in the shadow of their compatriots MARDUK, DARK FUNERAL etc. A band during its thirty years career has given us records monuments to this genre, such as “The Nocturnal Silence” and “Darkside”. While all their other full length albums are more than remarkable, they unfortunately have not received the recognition they deserve from the metal world. However, they remain undaunted, continuing the hard work! As a result, they return this year with their new album “Dawn Of The Damned” willing to make those who ignore them all those years, to worship their new melodic Death/Black Metal manifesto!

In this new record, the Swedes are giving free seminars on how to create high quality melodic Blackened Death Metal songs, as the guitarist Sebastian Ramstedt has written some of the best riffs of his career. After a short intro, “Darkness Be My Guide” comes with its war-stormy rhythm and an epic breakdown that will remind old AMON AMARTH. We go on with the first single “Mirror Black” with its stormy rhythm and an amazing “sadistic” riff. The “Tartarian Winds” that follows moves on an epic mid-tempo path that pays tribute to the mighty BATHORY and is one of the best songs in the band’s career! The following “The Infernal Depths of Eternity”, “Dawn of the Damned” and “The Shadows” are three excellent compositions of melodic Black Metal on the musical path that DISSECTION had created.

“As the Fire Burns” sets fire to its way while “The Return of a Long Lost Soul” with the influences of IRON MAIDEN on guitars varies musically, comparing to the rest of the record. “Devil’s Spawn Attack” with the participation by DESTRUCTION’s Schmier and the Thrash Metal aesthetic marks the closing of a wonderful album. A release in which we should emphasize also to the awesome performance of Joakim Sterner on the drums and Anders Strokirk on vocals. Finally, Fredrik Folkare’s production is brilliant with the guitars being a little high in the mix, while the album is also dressed with an amazing cover.

With ” Dawn Of The Damned»” NECROPHOBIC prove that they belong to the top of the Death/Black Metal sound and I’m sure that Jon Nödtveidt is watching them proud of what they have achieved, following his music legacy.

Falconer – From A Dying Ember