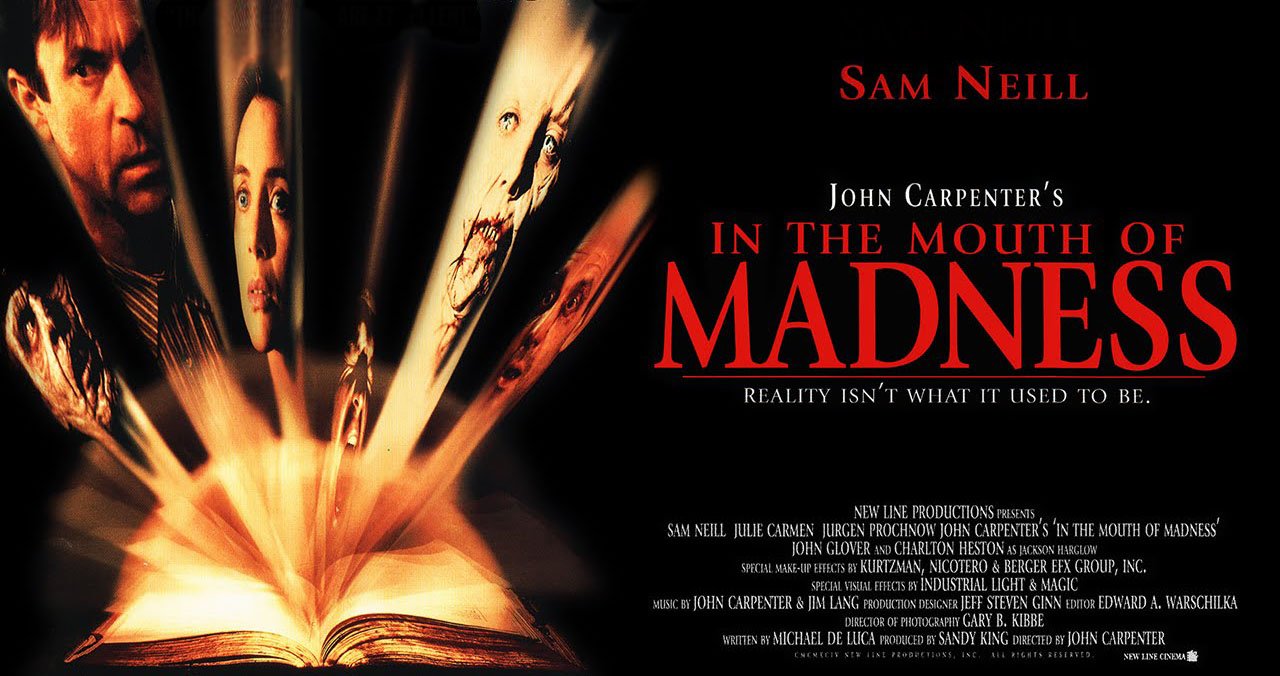 “You are young yet, my friend,” replied my host, “but the time will arrive when you will learn to judge for yourself of what is going on in the world, without trusting to the gossip of others. Believe nothing you hear, and only one half that you see.
E.A. Poe “The System of Dr. Tarr and Prof. Fether”

Lovecraftian horror was never easy to depict on the silver screen. Many directors tried and the result was… mediocre. That’s not the case with Carpenter’s Apocalypse Trilogy. The Thing (1982), Prince of Darkness (1987) and especially In the Mouth of Madness (1994) deals very successfully with the Lovecraftian cosmicism, a philosophical belief which states that humans are insignificant in the cosmos and if another form of intelligent life exists, then we are neither superior nor necessarily inferior to them. Cosmicism states that there is no recognizable divine presence, such as a god in the universe and its most prominent theme is humanity’s fear of their insignificance in the face of an incomprehensibly large universe. A little bit of deterministic materialism mixed with atheism and an ounce of existential pessimism, it may sound harsh and depressive but this was the philosophical fuel for one of the most important horror writers of the 20th century, H.P. Lovecraft.

The plot is more or less the following: The extremely capable freelance insurance investigator John Trent (Sam Neill) is hired by the publisher Jackson Harglow (Charlton Heston) to find where the famous writer Sutter Cane (Jürgen Prochnow) might be. After writing a series of best-sellers in the horror genre, the “world’s best-selling author” has simply vanished right before the release of his new novel, “The Horror in Hobb’s End.” In the bridge of a mass hysteria, the writer’s fans are waiting for the new release but it’s Sutter Cane who has the finished manuscript and his publisher demands the insurance compensation if he doesn’t receive the manuscript on time. John believes that Cane’s disappearance is part of a marketing plot organized by the author’s publisher and thus he decides to follow his instincts traveling with Cane’s editor, Linda Styles (Julie Carmen), to New Hampshire, seeking for the presumably fictional town of Hobb’s End. When they finally reach their destination, John discloses that Sutter Cane has unleashed a powerful evil force in the Black Church of this mysterious town and that his twisted imagination is changing the reality and perception of those who read his novels.

Watching the film, we follow the story in medias res (Latin for “in the middle of things”), a story telling technique that has its root in Homer’s Odyssey and is characterized by the fact that the narration opens in the midst of the plot. Works that employ in medias res often later use flashback and nonlinear narrative for exposition to fill in the backstory and that’s exactly what our film does. John Carpenter worked really hard during the montage to keep a coherent balance between “reality” as our protagonist experiences it and fiction, achieving a very interesting effect for the viewer who is often taken by surprise by the constant changes between the two narrative frames and the multilayering of different perspectives.

Everything in the film is heavily influenced by H.P. Lovecraft [it’s title by Lovecraft’s “At the mountains of madness” (1931)] and it’s full of Lovecraftian references like “the Old Ones”, or the name “Mrs. Pickman” which is referring to Lovecraft’s short story “Pickman’s model” (1927), or Shutter Cane’s book title “The Hobb’s End Horror” that reminds us clearly the title of Lovecraft’s short story “The Dunwich Horror” (1928), “The Haunter out of time” brings to mind “The shadow out of time” (1934) or/and “The haunter of the dark” (1935) etc. I should also note that our “best selling author” Shutter Cane probably refers to our generation’s favorite writer Stephen King (both names having the same number of letters, nice one John…).

John Trent follows the maps carefully hidden in the artwork of Shutter Cane’s paperbacks to find the exact location of Hobb’s End. The book covers all showcase things happening in the movie. “Haunter out of time” shows Linda Styles reading from Cane’s typewriter. “The Hobb’s End Horror” shows the Church where Cane set up his hellish “Operations Center”. The “Breathing Tunnel” was the tunnel that Trent was running through to get back to his reality. “The Feeding” shows the children chasing the dog. “The thing in the Basement” shows Mrs. Pickman with an axe in her basement. And “In the Mouth of Madness” shows Trent running away from the monsters in Hobb’s End (GoodBadFlicks, Exploring In The Mouth of Madness).

Apart from H.P. Lovecraft, I’d say that the script was also influenced by the work of E.A. Poe and more precisely by one of his short stories “The System of Dr. Tarr and Prof. Fether” (1856). Poe’s story unfolds in an asylum and has to do with the conflict of two types of systems : the “soothing system” where there are actual doctors to help heal the insane patients versus the “system of Tarr and Fether” where the patients disguised as doctors wander around and are free to do whatever they please. Except for the obvious similarity, as the in medias res in our film starts in an asylum, the deeper connection I see between our film and Poe’s short story is the idea that a common perception of reality presupposes a social structure’s logical consent; might it be a small group of people or the entire human society. Logic as a way of thinking could be inverted or twisted leaving its place to the irrational and consequently, order could give its place to dystopian authoritarian states or even total chaos (hello modern world, how’s it going?).

The script was written by Michael De Luca (Freddy’s Nightmares TV series, Judge Dredd) during the 80’s and initially John Carpenter passed on the project. New Line Cinema announced the production with Tony Randel attached to direct and later on with Mary Lambert. But it was Carpenter who finally was signed on as director and the filming took place from August to October 1993 (William S. Wilson, Newsploitation: In the Mouth of Box Office Sadness).

The soundtrack has a strong prog-rock flavor mixed with some dark ambient music. It’s composed by John Carpenter and Jim Lang and there was a CD release with 23 tracks in 1995 through DRG Records. The guitar work in the opening track “In the Mouth of Madness” cannot pass unnoticed as it’s by the legendary English guitarist, singer and songwriter Dave Davies and listening to it, it might remind you The Tell-Tale Heart by The Alan Parson Project (at least that’s what it reminds me).

An excellent classic of the Lovecraftian horror subgenre, John Carpenter’s “In the Mouth of Madness” can be viewed on its own or as the third part of the Apocalypse Trilogy: A tasty trio that I strongly encourage you, my reader, to experience.