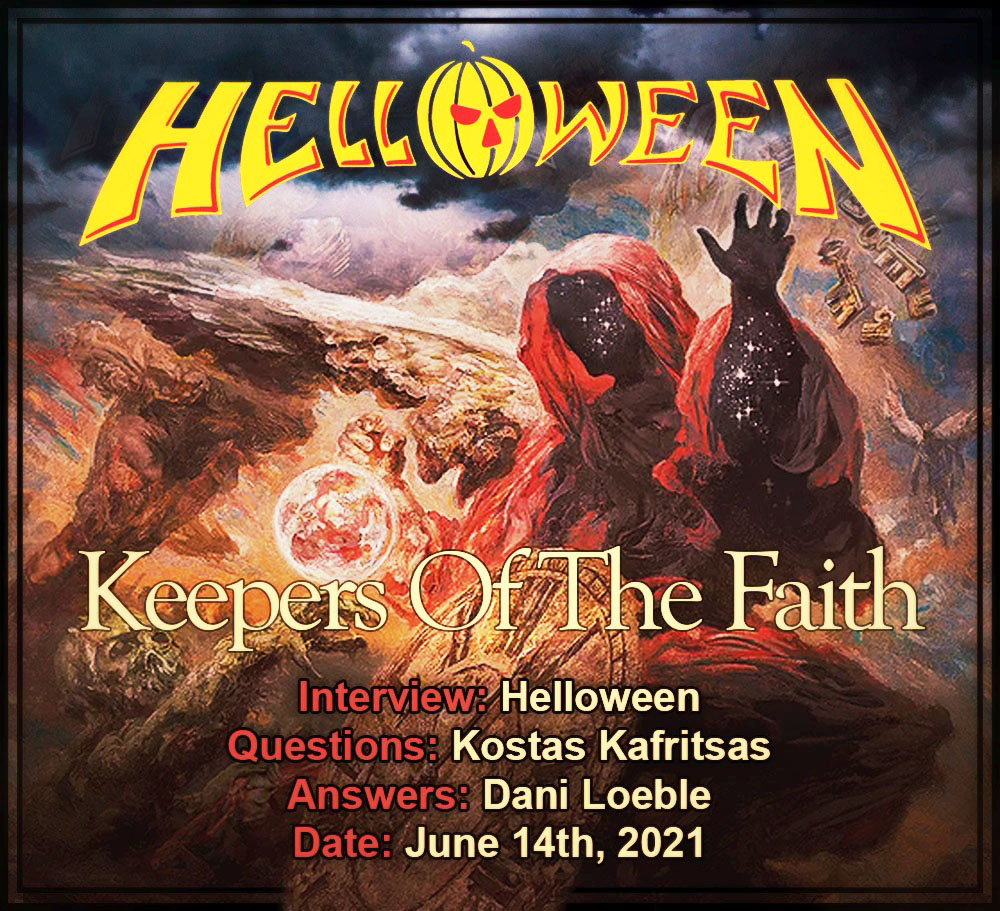 The legendary HELLOWEEN has recently released a brand new album, of high standards. We had the opportunity to talk with the drummer of the band, Dani Loeble. In a long conversation, he explains how the composition and the recordings of the new-self titled album took place, what was the vibe in the band after the great return of Michael Kiske and Kai Hansen. Dani also answers at a few really interesting personal questions. You can find more details at the interview that follows…

– Hello Dani! How are you doing?

Dani: Hellaaaaaas! I am fine, sitting in my recording room, well, you can’t see it because of the digital background. A journalist triggered me doing that. He video-called me and seeing a similar background I completely freaked out and I was like “what the f*ck do you have there as a background”? He answered “well, it’s an album cover”, wow man, then I thought that this is a cool idea. He guided me doing it and it was amazing!

– How is the current situation with restrictions in Germany?

Dani: Well, the situation is complicated. Here in Germany you need tests if you want to go to a restaurant or to a gym. In Switzerland for example, where few of my mates are located, you can sit in the restaurants without tests or masks. You know what? I don’t give a damn sh*t about it. I go to my studio to play on my own, I order via telephone or internet… I am really fed up with all this stuff going on, I feel that it is definitely time to go new ways. Who knows… Nothing is really proven. I know that expressing an opinion is like doing politics nowadays. And I am an artist… Of course I have my opinion, however it’s not that important to the world…

– Your music is important to the world though!

Dani: Yeah, absolutely! Some good things are coming up! I am overwhelmed so far by the reactions of the journalists. The journalists are the ones who have so far listened to our new album. Actually I am looking forward to what the fans are going to say. If the fans react the same, I will be completely excited and over the moon. And by the way today I got my copies, I unboxed my delivery from Nuclear Blast. There’s a great black box, I love it! And I even didn’t know that there is a “crack the riddle” thing in it. The last time we had something similar was when we released “Gambling With The Devil”. This time it was unexpected! You have to turn your cd and place it onto the booklet layer and do other nice stuff. It’s really cool!

– I was wondering how did you experience the great return of Michael and Kai?

Dani: I remember this moment quite well! The first meeting we had together was in the conference room of our rehearsal studio. I have known Kai for a long time, so it was not a big surprise, not really new to me. However, I met Michael only once in the last 30 years, it was in a festival, very long time ago. It was the first time when Weiki met Michael after he left Helloween and I was there… It was back then I was starting being part of this strange “Clash of the Titans”! Well, at the beginning of the reunion phase, Michael was a bit hesitant, a little insecure, he didn’t know how to position himself in the band. I can imagine that it might be hard, as we are 7 strong and completely different characters, for him it must have been difficult to handle it in the beginning. During the reunion tour Michael opened up, he is a fantastic person. He has a warm heart. We have a great relationship together. I really have a big respect for him, apart from being a talented vocalist, which is something no one can deny. Moreover, it was important for us to avoid integrating someone who could make things more difficult and Michael is exactly the opposite. It’s a “win-win” situation. I am very proud sharing the stage with him and having such a good personal relationship with him.

– Let’s move now to your new album. A great comeback! I was surprised by the title of it. Just “Helloween”. Why? Do you consider your new album as a form of renewal?

Dani: For sure. When we were about to find a title for the new album, you know, having a bunch of possible titles and exploring ideas and pros and cons, someone dropped the idea of naming it “Helloween”. Immediately, everyone among us gave it a go. To name an album, and in a sense a reunion album, just “Helloween”, is a statement. This material definitely deserves to be named like this. We consider it as a heavy title and it is an honour for us to carry this title for our new album.

– How did you incorporate the high expectations of the fans in the whole process? I mean, everyone is looking at you and expects something really extraordinary. How did you manage that?

Dani: That was never a matter of fact in the composition or recording process. Everyone of us was ready to give his best for it, we already had a high sense of responsibility and we remained focused. We didn’t spend any time on that, we weren’t led by any pressure from fans, regarding their expectations or so on. It just happened. When 7 strong music characters give their best, it simply happens, or it doesn’t. In our case, it happened!

– I can imagine that it must be very tricky to align between three great singers and take the most out of this diversity in voices! Listening to the album it works perfectly fine. How does the “magic” happen?

Dani: Yeah, it requires effort to balance it out. To not have too less or too much of Kiske, Deris and Hansen, and please don’t undermine Sascha Gerstner, he is a great singer as well, doing a lot of backing vocals! So, we have 4 great singers! This process, from composition to mixing, took a long time. I mean, really long time. We need to thank our producer Charlie for that, he did quite well, he created a lot of different versions of the songs, using voices of different singers, so that we could pick in the end the ones you listen in the album. An example of the process is “Skyfall”, the most tricky song to balance the voices. That’s why we have the alternative version of it. It was very interesting! Nothing was bad actually! All versions we tried out were equally interesting and in the end great, it’s just that they were different!

– How did the corona pandemic influence the whole process? Is there a magic moment from the studio experience that you keep in your memory and want to share?

Dani: A magic moment was while we were jamming. We rented the same studio that the original first line up was using to jam and record. That’s a great thing… I also brought Ingo’s original drum kit to record. The same one that he used to record the “Keeper Of The Seven Keys” albums. So, you can imagine how the vibe was. Having on one side, Weiki and Kai jamming together again, and at the same time Kiske, Kai and Deris singing all together, this is definitely a highlight, an emotional one. I don’t want to sound too esoteric, but sometimes as musicians we need to be kind of esoteric, putting our heart in all we do. To your first question, actually the pandemic had a positive influence to the whole recordings, process and final product. It provided to us time and space we didn’t have. Otherwise we would have been touring for at least a year… At the beginning of the recordings we were pushed to get them done because of the combination between studio and concerts. Then the pandemic came up so we had the time to re-arrange things and focus on recordings. We devoted more time to vocals and guitars and of course, mixing and mastering.

– Let’s go now to some more personal questions. You play in the band for more than 15 years. What do you enjoy the most playing in HELLOWEEN?

Dani: I am a proud drummer. I consider myself as a drummer rather than a musician. That’s the reason why I do not participate in any compositions of songs or so. I have so much to do with my drum arrangements, to keep going this thing with the boys in HELLOWEEN. I am really proud playing with them. I really enjoy playing HELLOWEEN music. This band is my family and it has been a long time since I joined. It has been 17 years. I have been the drummer who has been the longest in the band, compared to the rest of the drummers in the HELLOWEEN history. I can’t wait meeting the boys, going together into the rehearsal room and give it a go. That’s my life. This f*cking pumpkin thing became my life. I enjoy every f*cking night. It doesn’t matter for me if my legs are burning or my heart is bleeding, because I have a wife and a family as well waiting for me.. HELLOWEEN really keeps me fresh and alive every day. I will continue as long as I am able doing this… That’s my dedication.

– Thank you for the inspirational description Daniel! Apart from your latest album, you have participated in 5 more studio albums. What are the 5 songs that you love playing from your era with HELLOWEEN?

Dani: First of all, “Are You Metal?”. That’s a great song I love to play every night! “Waiting For The Thunder” is an amazing one as well. I can’t wait to get this song into the stage again… “Paint A New World”, “Where The Sinners Go”, “Straight Out Of Hell” songs are awesome, and “Heroes” from the previous one “My God Given Right”. That song was rocking the house all night when we were playing it!

– In case you had the chance to play in one studio album from the ones you didn’t participate, which album would you pick and why?

Dani: Wow! I have never been asked something like this… You make me stumble and fall! Well, it would be “Walls Of Jericho”. And I will explain why. As soon as you play this album, you will be slapped in your face with the roughness, energy, rawness of it. It’s amazing. During the previous tour, we created a medley out of this album. It was fantastic. 15 minutes of pure f*cking energy, that clearly shows what this record is all about. When we were playing that medley, I was reflecting a lot. I needed to transmit this attitude, this vibe, this impression, into the stage. Moreover, this album guided me a lot through the recording of the new album as well and I discussed it multiple times with Charlie, our producer. It’s a great inspiration and I am quite happy and proud that I linked it together.

– Thank you so much Daniel! Good luck with your new album! We hope to see you live in Greece…

Dani: Yeah, I remember that the last concert in Greece was cancelled. It was a pity… Hopefully next time we are going to make it. Thank you for the nice talk Kostas! Have a great day!

Thurisaz – The Veil Of Balance