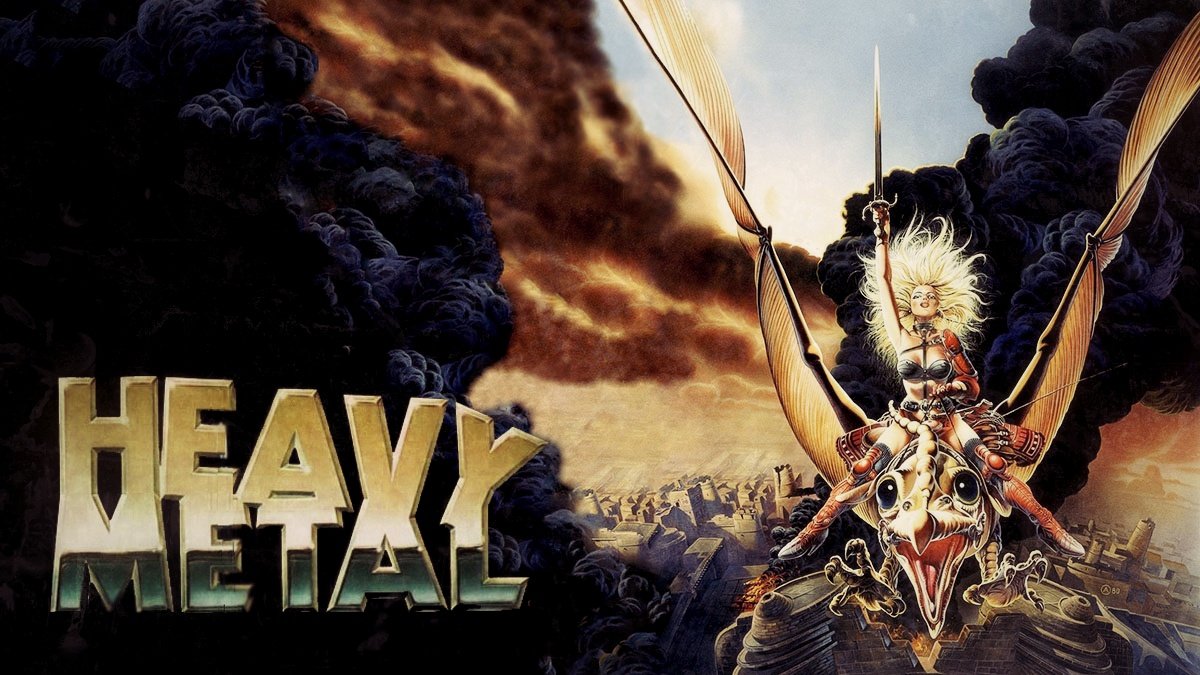 Writing for thegallery.gr about cinema and its cultural side effects, can be a full-time brain-bug. There are countless movies that are important, there are even more viewer’s favorites, groundbreaking and radical filmic endeavors, experimental shorts and charming classics. But how can anyone resist for long to an animation called “Heavy Metal” (1981)? I mean… we’re talking Heavy Metal here…

First time I watched the film was somewhere in the early 90’s. It was in VHS of course and the teenager me was expecting jeans and leather not cracker jack clothes (shit, I’ve just quoted Manowar lyrics…), long hair, sexy women and a blasting soundtrack. Well, as people say “hope for the best, but expect less” … Although for the sexy women, I couldn’t really complain.

But what is this film about? There are eight chapters for let’s say six stories (counting out the prologue and the epilogue). All the stories are narrated by the Loc-Nar, an extraterrestrial green crystal ball which is brought to earth by an astronaut as a gift to his daughter during the intro. The only element in common between the stories is Loc-Nar as the behind the scenes protagonist who is using its evil powers attempting to corrupt everything pure at heart.

The film ends and I’m like “Ok, The mob rules is a classic but who the fuck is Elmer Berstein?”. Where’s my Heavy Metal vision and where’s Heavy Metal music in general? Well, I got my answer when fast forward a couple of decades, I fell onto an old comic book from 1974; that was the year when the United Humanoids or Les Humanoides Associés, as these four Frenchmen liked to call themselves, published Métal Hurlant, an anthology of Sci-Fi and horror stories. The artistic genius Jean Giraud (aka Moebius) was one of the four and through the pages of Métal Hurlant he will set the foundation stone for the Cyberpunk aesthetics (see my article on Blade Runner on thegallery.gr) and that of the new era of Sci-Fi in general.

In 1977 the American publisher Leonard Mogel publishes Heavy Metal comic book, a US version of Métal Hurlant basically translating and reproducing the original and the film follows with Mogel as the producer on 1981. That explains a lot. The film was roughly based on the US version of the comic book and is itself “…an anthology of various science fiction and fantasy stories adapted from Heavy Metal magazine and original stories in the same spirit. Like the magazine, the film features a great deal of graphic violence, sexuality and nudity. Its production was expedited by having several animation houses working simultaneously on different segments.” (Wikipedia)

The film had a budget of almost 10 million dollars and watching the final result I wonder how much of it was put aside for its creators’ cocaine stash. The animation wasn’t nearly as well made as it’s Japanese counterpart from the 1970s. The storyline, to which I’ll be referring shortly, didn’t make a lot of sense and the score interesting as it may sounded, was irrelevant to the music genre that the title clearly referred to… We’re in 1981 and there isn’t a single song representing truly the NWOBHM era for god’s sake! Buuuuut it radiates a certain charm and viewing it’s admittedly an experience.

Back to the scenario, after the Loc-Nar kills the astronaut Grimaldi the orb compels his daughter to look into it and our first story begins.

In a dystopian New York City in 2031 a taxi driver finds himself between a beautiful woman and a gangster. The later seeks to obtain the strange green orb that the woman has for himself and she agrees to sell it to him with the help of her lover, our cabbie.

A teenager finds “a green meteorite” (the Loc-Nar) and puts it in his room. It transforms him into a muscular adult and teleports him to another reality where he will live his life as a hero and he will have sex (finally)… twice in a day!

On a space station a criminal, captain Lincoln, is currently on trial accused of serious crimes. Nevertheless, he is quite relaxed as he has promised to bribe the main witness, Mr. Hanover Fiste (his name refers to the idiom “hand over fist” which is almost exclusively used when referring to the accumulation of money). Fiste takes the stand upon being called to by the prosecutor, but his perjury is subverted when the Loc-Nar turns him into a …hulk.

A World War II B-17 bomber nicknamed the Pacific Pearl makes a difficult bombing run with heavy damage and casualties. As the bomber limps home, the co-pilot goes back to check on the crew. Finding nothing but dead bodies, he notices the Loc-Nar trailing the plane. Informing the pilot, he heads back to the cockpit, when the Loc-Nar rams itself into the plane and reanimates the dead crew members as zombies.

So Beautiful & So Dangerous

Gloria, a beautiful young stenographer is kidnapped by aliens during a pentagon press conference. After a very satisfying robot-sex with Anrak the ship’s robot, she ends up to a huge space station thinking about a somewhat complicated marriage proposal.

The Loc-Nar, now the size of a giant meteor, crashes into a volcano on a peaceful world. It draws people. The volcano erupts, and green lava covers everyone, mutating the crowd into an evil army. The mutants attack a city while its leaders, desperate, mentally summon the Taarakians, a (possibly extinct) warrior race, with whom the city had a pact. The city falls but Taarna, a mute woman warrior, answers their call. She rides on her dinosaur-bird mount avenges the city, kills the mutants’ leader and destroys Loc-Nar sacrificing herself in the end.

As the final story ends, the Loc-Nar which was terrorizing the girl explodes, destroying the house in the process. Taarna’s reborn mount appears outside, and the girl happily flies away on it. It is then revealed that Taarna’s soul has been reincarnated in the girl. The girl’s hair color changes to white and we see a Taarakian mark on her neck.

There is a missing link between the story with captain Stern and the bomber full of zombies. In the film’s very loose storyline there’s always an explanation how the Loc-Nar finds itself from one place to another but that’s not the case passing from the third to the fourth story. In the VHS that was released back in the 90s, there was an extra chapter following the end of the movie, the one that had been left aside for its 1981 theatrical release.

The removed segment is “Neverwhere Land”, a story that follows the influence of the Loc-Nar upon the evolution of a planet, from the Loc-Nar landing in a body of water, influencing the rise of the industrial age, and a world war. The music for one of the best in my opinion segments of Heavy Metal was initially a loop from Pink Floyd’s Time but finally every release was followed by Krzysztof Penderecki’s Passachaglia.

As in the magazine, the evil emanation Den battles in the second story is called Uhluhtc. That is Cthulhu spelled backwards, a reference to the Lovecraftian Mythos.

As the barbarians overrun the city of Kraan, the structure where the council chamber is located resembles the helmets worn by the two men on the cover of Black Sabbath’s album “Never Say Die!” (1978) – the last album the band recorded with Ozzy Osbourne before he left to start his solo career. Black Sabbath, with Ronnie James Dio singing, are featured with E5150 and the title track from their album Mob Rules (1981). The version of Mob Rules we hear on the film is an early demo, the band re-recorded it for the album.

“{Heavy Metal” is parodied by South Park in their twelfth season in an episode entitled South Park: Major Boobage (2008). Kenny gets high off of cat urine and has several hallucinations that uses the same animation style of the movie, songs from the film’s soundtrack, and numerous references to the movie itself.

This movie was released from Sony Pictures Home Entertainment on the DVD Collector’s Edition on November 23, 1999, and on Blu-ray on June 14, 2011.

The film’s soundtrack was released on 1981 in the US as a double LP by Full Moon and Asylum Records and from Epic in Europe. It included 16 tracks by artists such as Black Sabbath, Blue Oyster Cult, Nazareth, Stevie Nicks, Journey and more. It’s, like the film, an odd mixed bag and both are interesting time capsules of late 70’s-early 80’s pop culture.

Unusual for the time, an LP recording of Elmer Bernstein’s score was released alongside the soundtrack in 1981, and it featured the composer’s first use of the ondes Martenot, an instrument which became a trademark of Bernstein’s later career. On March 13, 2008, Film Score Monthly released an official, expanded CD release of Bernstein’s score, which he conducted (Wikipedia).

In the end, is this movie for you? Well if you’re the kind of guy or girl who takes always everything too seriously, it is definitely not for you. The movie reeks of sexism, drug abuse, the writing is somehow flat and the animation rudimentary and dated.

But if you’re the kind of person who digs early Manowar and at the same time doesn’t believe that women should be treated like sex slaves, then you’re mature enough to enjoy it. I mean, if you can tell the difference between fantasy and reality, IF you’ve managed to grow over the emotional intelligence of a fourteen-year-old… but at the same time you enjoy searching early 80’s demo tapes, you dig bands that have a single “historic” releases and you’d like to check out the passage from the late 70’s to the early 80’s pop culture, then this film is definitely for you and you must enjoy it without any regrets.