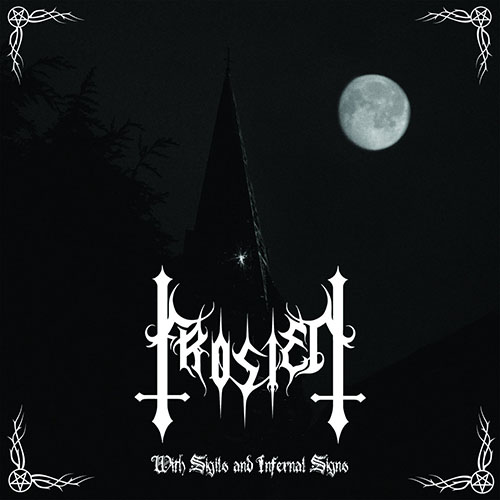 FROSTEN originate from the United Kingdom and were formed in 2019 by the hyperactive Azrael (the only member), who is not new in the Black Metal scene as he has participated in several bands in the past. As far for the present besides FROSTEN, he also has ETHEREAL FOREST, while participating as a studio guitarist and also making the production of the albums in THY DYING LIGHT (who gave us in 2020 their selt titled awesome album). “With Sigils and Infernal Signs” EP was released in November 2020 and is FROSTEN’s introductory release to us.

The EP is a dark forty-minute journey through Black Metal musical paths of the early 90s, with the feeling of GORGOROTH hovering in the compositions. Aggressive rhythms with razor-like guitars, furious drums and a clean production accentuating the basslines, while Azrael’s raw, eerie vocals complement a sonic ensemble that tries to recreate the stylistic knowledge that the Norwegians first imparted. Although tremolo riffing dominates, there is also a charming approach with slower parts and melodies that add more to the atmosphere and create an attractive dark musical spectrum.

“With Sigils and Infernal Signs” is a passionate primordial approach to the aggressive Black Metal of the 90s and with its excellent and simple compositions it gets to reveal FROSTEN’s talent and give a refreshing sense to a classic sound. Azrael creates a concrete release that emphatically answers the question posed by many about whether it is worth releasing in 2020 a raw Black Metal record influenced by the second wave of the genre.

Agodea – Of Stars And Madmen