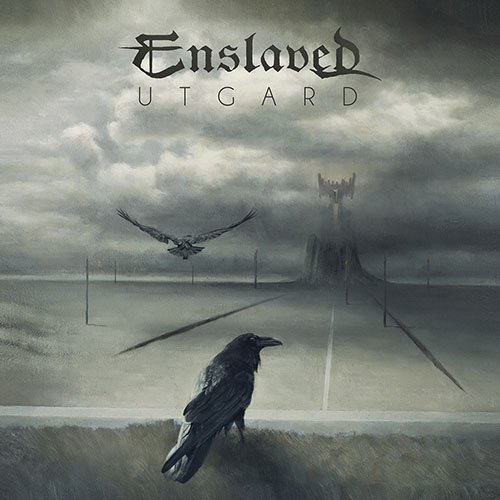 “Utgard” according to the North Mythology could mean a variety of things but mostly it is about an area that the Giants used to live, a suburb we could say of Jötunheim. As a result, such a choice for title album was a natural thing for ENSLAVED from Bergen since it is something quite representative of this “audio mix” they are into nowadays, with all those different influences and elements they have enriched their sound the last 15 years or so.

As a typical “early ENSLAVED” fan that I am, until the end of the previous century (talking about “Blodhemn” from 1998), I faced various difficulties trying to follow them, when they started experimenting in their new, lighter and different paths in their career. With the new album “Utgard” as it is more than obvious, they are perfecting this transition and they are offering us a total of 9 songs of surely extreme music, but also quite experimental prog-metal, with parts of krautrock and electronica which I hope the mighty Odin will enlighten them in order not to add more of them in the future.

It all starts with “Fires In The Dark” and after a pompous introduction in ancient Noewedian we are diving straight in and face what it is all about. After that we got all exited with “Jettegryta” a powerful track with heavy BATHORY epic influences and an amazing heavy bass allover, but in the end it just brings us back to today’s standards. Then we have the almost 7 minutes long lasting number “Sequence” where I personally got bored to death, but fortunately “Homebound” brought me back, it is one of the best tracks in here, it combined the past of the band with the present, with nice alternations and variety keeps you satisfied till the end. Good things last short, and “Urjotun” that comes next, at least for my taste is a big disappointment, to say the least. Fortunately it lasts shorter than the rest of the songs. After that, “Flight Of Thought And Memory” is another highlight with its powerful entrance, the melodic-atmospheric break and the speeding that comes after. I have to say though that after the first playback, I was skipping the last one and a half minutes. The 2 final tracks are not full of surprises at all. “Storms Of Utgard” is a rather heavy prog track with high speeds and vocal variations, mostly brutal stuff (fortunately!) while “Distant Seasons” with all clear ANATHEMA and PINK FLOYD (one and the same to be fair) references is probably a good sign of what the future will bring us.

So, what are we doing now anyway? “Utgard” is definitely a brave move from the side of the band, it needs an open mind and more than a few hearings to get deep into it. The ENSLAVED of 2020 surely honor their past and move forward at the same time. There are lots of great moments into it and if you think that extreme black metal with prog music, melodies and power combined is something that you would fancy a lot now that the winter is approaching, this album is definitely one of the best choices you could make.

Six Feet Under – Nightmares Of The Decomposed

Eric Clayton And The Nine – A Thousand Scars