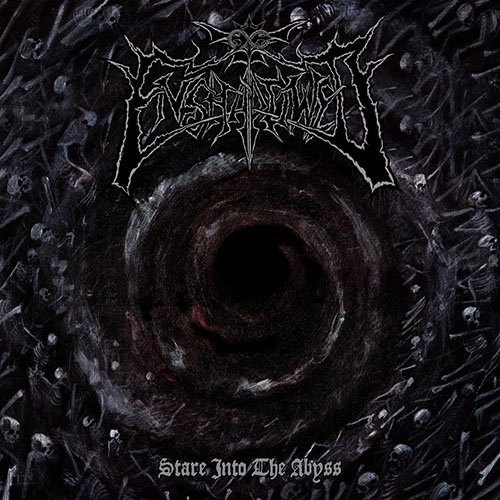 The Greek blacksters Enshadowed begun their journey back in the late 90´s as “Sacrificial” and later on as “Nocternity Enshadowed”. Their first LP “Messengers of the darkest dawn” was released in 2002 with the band changing its name to its current form and next year they release their 2nd LP  “Intensity”. In 2013 (and many splits later) ENSHADOWED completed their 3rd full length “Magic chaos psychedelia” and in 2020 as a trio (Serpent: vocals, Necro: guitars, Golgotha: bass) and with the addition of the session drummer George Trakas to their studio line-up, they release “Stare into the abyss” in CD and vinyl.

To put it bluntly, we have 35 minutes of old-school black metal bombardment in 7 tracks ladies and gentlemen.

The album takes off with “An Aspect Οf Chaos”, a pretty straightforward in your face song, which introduces the listener to  both George Trakas’ incredible drumming performance and the very clear and balanced production.

“The Great Animist” and “Beyond the knowledge of truth” follow old Norwegian recipes with great success. Tremolo riffs, half-time arpeggiated chords over machine gun type blast-beats, bleak breaks with minimal but efficient melodic passages being some of them. By now the listener has surely noticed Serpent’s excellent vocal abilities and the very well-thought structure of the songs.

“Blackened Mouth Of Despair” has a Greek black metal flare reminding us that besides the lands of the European north, there are deep native roots to the genre that aren’t to be forgotten.

And now for the last three songs that constitute also my favorite part of the album: “Divide You Fall” , “A Form Of Agony” and “Entropy Of Men”. Here the musical ideas surprise pleasantly the listener but at the same time the band never strays from its references. And that is very impressive. Old-school and second wave: yes – but not exactly the “same old” once again.

The Norwegian influence may be always present but we’re talking about a greek band here with over two decades of experience on it’s back. These are no copycats: The second wave is well digested and very creatively combined with characteristics that the greek scene left to the genre throughout the years. The atmospheric element is omnipresent (artwork, music and lyrics) but it never gets tiresome or self-indulgent. The compositions are strong, the production is of the highest level, Serpent interprets the songs with mastery and without exaggeration, Necros’ sound is phenomenal (the guitars sound great throughout the album) and Golgothas’ bass is always there, heavy as it should be, completing the orchestration.

Is there something I didn’t like? Well, it seems to me that everything with “Stare into the abyss” is too perfect, too quantised. There were times when I felt that the natural imperfections of a recorded performance were so exhaustively fixed, that the result sounded somehow cold and mechanical. But that’s a thing almost every big name in the industry does nowadays. Perhaps it’s time for the musicians in the genre to reconsider the overall aesthetics and repeat Cartman’s wise saying: “Screw you guys, I’m going home!…” wherever this home might be.

So is this a great album? Well without being ground-breaking, it’s solid. It’s fun to listen to. It has the ideas and the musicianship. But the important question is: did I buy it? Yes. Should you? Absolutely!