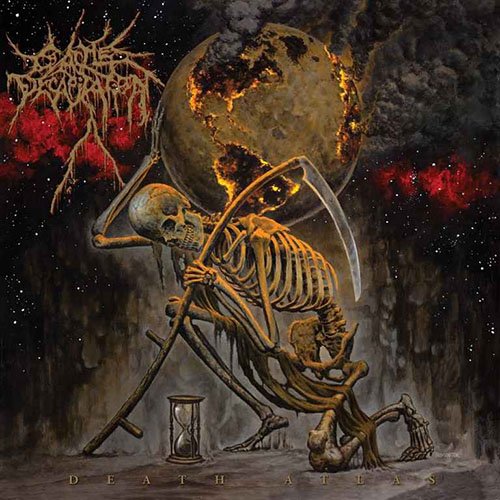 CATTLE DECAPITATION is a Death Metal band that comes from San Diego, California,  formed in 1997. It has released six LP’s, several demos and singles and participated in quite a few compilations. The interesting about this group is their way of life and their lyrical themes. They have a great concern about animal rights, liberation of individual and the most timely, environment and it’s pollution. Travis Ryan stated among other during the press release that accompanied the promo “That’s kind of why this album cover takes place in space, to remind you that the universe always finds a way to purge’. In the grand scheme of things, our species is merely a fleeting thought.” According to CATTLE DECAPITATION, all humans must extinguish since we have chosen “money as our God” and our selfiness doesn’t let us have a sustainable and better world. This radical and almost nihilistic approach can be seen at 2004 “Humanure” with the vegetarian friendly cover, at 2006 “ Karma Bloody Karma”  and in a greater level at 2012 “Monolith Of Humanity” and 2015 “Anthropocene  Extinction” (Really, what a title!”).

The cinematic intro of “Anthropogenic” lead us to the fiery maelstrom of “Geocide” with it’ s hypersonic riffs and blastbeats. Thereon, there is a stable building of tracks such as “Be Still Our Bleeding Hearts”, “Bring back The Plague” (you must be kiddin’, is it a joke or what?) and the MORBID ANGEL-ish  “With All Disrespect”. There are strategically placed moments of calm moments in order to give the listener the opportunity to rest but there are very few indeed. Credits must be given to the vocalist Travis Ryan, who reveals many masks during the recording. From guttural growling to  Dani Fielth-esque  too much shrieks , from piggish gourmet to extraterrestrial clean vocals, Travis gives an excellent performance. Of course he is not alone…his other team members are the guitarists Josh Elmore and Belisario Dimuzio, the drummer Dave McGraw  and the latest add to the roster-CRYPTOPSY’S mighty bassist-Olivier Pinard. In this album we can find grindcore moments, Death Metal (the old way), bombastic riffing, double sweeping bass and of course hyperblast drumming.

With the release of “Death Atlas” CATTLE DECAPITATION managed to almost reach the top and compete with BLOOD INCANTATION’ s “ Hidden History Of Human Race” album for the top Death Metal release of 2019. I’m sure that “Death Atlas” will stand in time as the masterpieces of their influences and I am talking about SUFFOCATION, NAPALM DEATH, CARCASS just to name some. I am happily “concerned” that in the future CATTLE DECAPITAION will get over this album and will create a greater one. Of course as Travis Ryan states “if we don’tt extinguish from planet Earth….”.

PS. This review was written before the Greek Government’s curfew order! Well, let’s face it as an opportunity to stay inside with our family and give them much more quality time, to listen to our forgotten albums and cd’s,  to read more books, to extend our mind and of course to surf to thegallery.gr and explore all the interesting articles and stuff there! Patience! It’s just a virus, it will pass away (-not according to CATTLE DECAPITATION….).