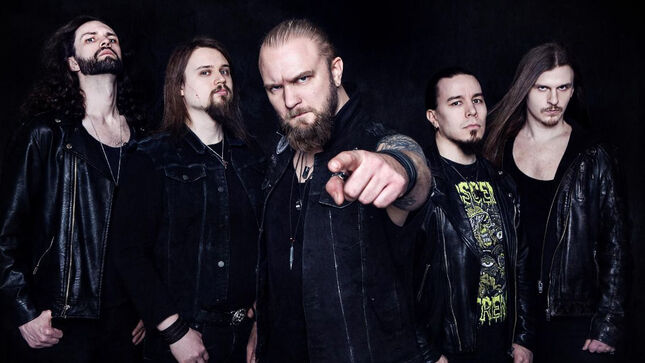 With an acoustic guitar introduction, the passionate, official first single and album opening title track marks an ode to Heavy Metal and precedes an epic, bludgeoning wall-of-sound with stunning instrumentation, blazing guitars and a performance of the most crushing drum-grooves imaginable!

Viktor Gullichsen comments on the album and first single: “Even in the darkest times of despair, the songs and sounds we cherish can help us light our way through the night. For us, writing the album ‘Voices In The Sky’ served this purpose during the past trying years. It let us imagine how it would feel to be back on the road, touring alongside our friends and our idols. As performing live is one of our driving forces, we eventually began to feel powerless without being able to do it.

This is especially apparent in the lyrics for the title track. It is a song about ambition forged in frustration and longing. About a desire for the validation an artist so often needs to fuel the endless pursuit of expression and accomplishment – especially the kind of validation we only can find in club full of roaring metalheads, reacting to our music. Even many other songs tell of travel, discovery and conquest. I wonder why…

Now that our newest creation is finally fully formed and ready to launch, we are beyond excited to head out on the most epic and ambitious chapter yet in BRYMIR’s 15 year history. See you on tour!”

“Voices In The Sky” marks a hefty next level creation in the vein of ENSIFERUM, WINTERSUN and CHILDREN OF BOTOM, but serves as a more modernized answer to the Melodic Death Metal equation with massive production, deep grooves and air-tight technicality. Nevertheless, BRYMIR continues to draw inspiration from traditional genres like folk and classical music, all brought together perfectly at the hands of the band and producer mastermind and singer Viktor Storm Gullichsen at JKB Studios, with mastering helmed by Tony Lindgren at Fascination Street Studios.

“Voices In The Sky” track listing

You can watch the officiail video for “Voices In The Sky” below: