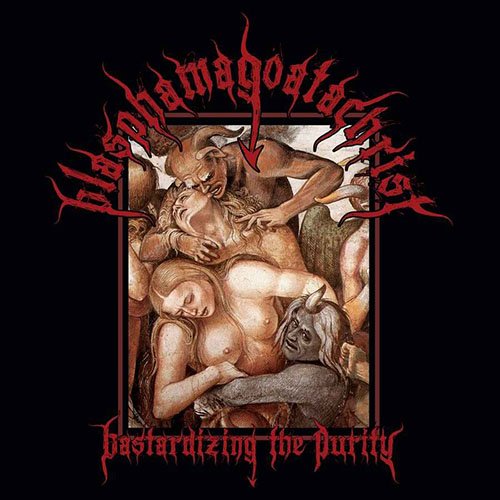 It’s 2017 and some sick guys from Brazil and Canada are forming BLASPHAMAGOATACHRIST to unleash their rage and hate through their music vision. The members who created the band are well known to us, in vocals we find Nocturnal Grave Desecrator, singer of the mighty BLASPHEMY, the band that gave birth to Bestial Death Metal/War Metal. In guitar its Tyrant Virrugus and in bass Sabbaoth of the Blood Moon from Brazilian GOATPENIS. The squad of destruction is completed by the Canadian drummer of the Bestial Metallers ANTICHRIST As Incinerator of Lacerated Angels. In 2018, they released the amazing savage demo “Black Metal Warfare” and now are coming back with their long-awaited debut “Bastardizing The Purity”, ready to destroy everything in their path.

In “Bastardizing The Purity,” we have 29 minutes of quality War Metal directly from the matrix. A bastard child who takes life and energy directly from the classic debut album by BLASPHEMY “Fallen Angel of Doom” of 1990. The sick intro with machine gun sounds and war sirens is preparing you in a best way for the violent atmosphere that you will find. Fast raw War Metal riffs, drums with a machine gun rhythm, huge bass lines and Nocturnal Grave Desecrator’s famous growl vocals present in a studio album after 27 years!!! The songs have a chaotic violent rhythm with a bestial character element that we hear in their 3 minutes average length.

“Bastardizing The Purity” is a devastating nuclear armageddon soundtrack which, after some listenings, shows its great quality. A record that manages to leave its magic War Metal touch while remaining charming extreme, from start to end, with an inhuman and relentlessly savage character. This release is not for the masses, as BLASPHAMAGOATACHRIST is not for everyone. Veterans did their miracle, and we expect more new material from them in the future!