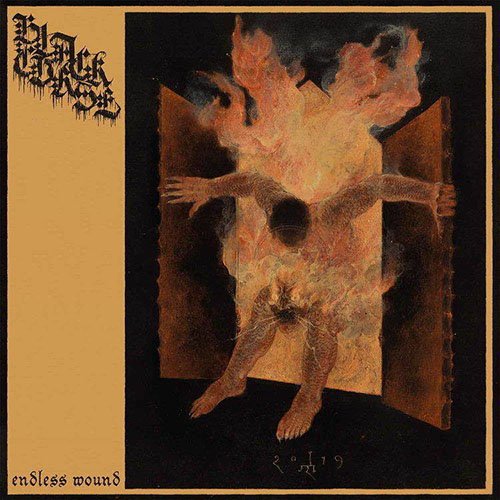 The term “Death Metal Super Group” may be used often, but it is not justified every time by the result. This does not happen in the case of the American Blackened/Death Metallers BLACK CURSE, who this year are introducing us their bestial debut ‘Endless Wound’. BLACK CURSE was founded five years ago (2015) in Denver of the United States, by members of BLOOD INCANTATION, SPECTRAL VOICE, PRIMITIVE MAN and KHEMMIS. In 2019 they caused an “earthquake” in the underground with their fantastic demo “Endless wound” and created high expectations for their future full length release. We had not recovered yet from the devastating demo, when they announced few months later that they will release their debut album. So, they took the three compositions of the demo, added four more songs and released the most barbaric and sick Bestial Death Metal album of the year, entitled with the same title of the demo, “Endless Wound”!

The nightmare of “Endless wound” begins with “Charnel Rift” and “Crowned in (Floral) Vice” with a wave of raw guitar riffing and vocals, marked by a sluggish bass line and a brutal rhythm in drums, giving a huge and monstrous sound. Furious rhythms are only interrupted by some Doomy breakdowns that bring us in mind AUTOPSY and INCANTATION. The record grabs the listener from the start in the wildest way with his intensity and cataclysmic rhythm. Next is “Enraptured by Decay” with its slower paths and an epic melancholy in the middle of the song. The third song “Seared Eyes” is a three-minute masterpiece of violence with Eli Wendler’s vocals sounding completely psychopathic. Τhe instrumental “Lifeless Sanctum” is next and, with its pompous rhythm, opens the path for the next two and final songs of “Endless wound”. The title track that is next, starts on fiercely aggressive paths while morphing into a muddy atmospheric Death/Doom anthem. BLACK CURSE decided to close this album with their best song. I’m talking about “Finality I Behold” which, in its eight minutes, is a musical overview of all those elements that made this album so impressive. Chaotic riffs and solos, bestial/sadistic Doom rhythms in combination with sick vocals end “Endless wound” in a massive way. Also, a separate reference to Eli Wendler’s vocal performance must be made. Those of you who’ve heard him in SPECTRAL VOICE will not be prepared for what you are going to hear in “Endless Wound” as his harsh vocals are sick and paranoid.

BLACK CURSE in their debut took the atrocity of SARCOFAGO, MORBID ANGEL and MAYHEM of “Deathcrush”, combined it with Death/Doom influences from AYTOPSY and INCANTATION by filtering them through their personal musical vision. With “Endless Wound” they released an amazing War Metal album and proved that in this genre you can be different from the mass and experimental in the barbarity of Blackened Death Metal. The fact that each member of the band comes from a different musical background is reflected idealistically in BLACK CURSE’s DNA. BLOOD INCANTATION and SPECTRAL VOICE gave their technical ability, PRIMITIVE MAN the monstrous chaotic bass-line, KHEMMIS the Doom elements and all these gave birth to an electrifying album that destroys everything in its path. A challenging sound that allows BLACK CURSE to touch their musical vision. One of the most special releases of 2020 invites you to travel in its paranoid and relentless brutality!

Flotsam And Jetsam – The End Of Chaos