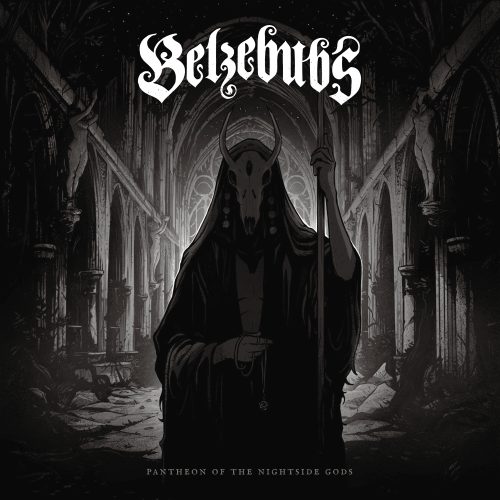 Black Metal, melodic Death Metal or even blackened Death Metal, whatever you call BELZEBUBS, doesn’t really matter. “Pantheon Of The Nightside Gods” is a GREAT record! And I call it a great record, not because it’s innovative, but because it’s an amalgam of all the great moments (and clichés, of course) that you want to hear in a black/death record.

It might be the anonymity, or even the cartoonish style that excited me and made me love this album from the first time I heard it. But it’s not the first time for an attempt like that, since GORILLAZ did it first and DETHKLOK followed.

One might say: “Should I care about marketing”? No, because it doesn’t really matter, but goddammit, they do a really good job to ignore. To some “true blacksters” the cartoon concept might seem strange and out of place, but if you overtake that part and focus on the music, I don’t think there’s going to be anyone who will dislike it.

“Pantheon Of The Nightside Gods” will trigger mixed feelings. From the majestic touch of “Cathedrals of Mourning” (the opening track) to “Faustian Alchemist” (which sounds like DISSECTION on steroids) there’s not gonna be a moment that you won’t smile with joy and reminisce all the classic albums of the genre.

Throughout the album it’s obvious that, whoever is behind it, they are great musicians, and that’s made clear by their composition structure.

BELZEBUBS didn’t choose to build a reputation by burning churches in their free time. Instead they are trying the hard road of anonymity. They try to breathe new life into the genre by doing something out of the ordinary.

For sure, it’s an album that will lure many fans into Black and Death metal, and as I said before, it’s going to make all the “veterans” smile with satisfaction.

BELZEBUBS are the “Avengers” for the Marvel Universe, and the “Expendables” for the action hero movies of the 80s!

Cro-Mags – From The Grave (EP)