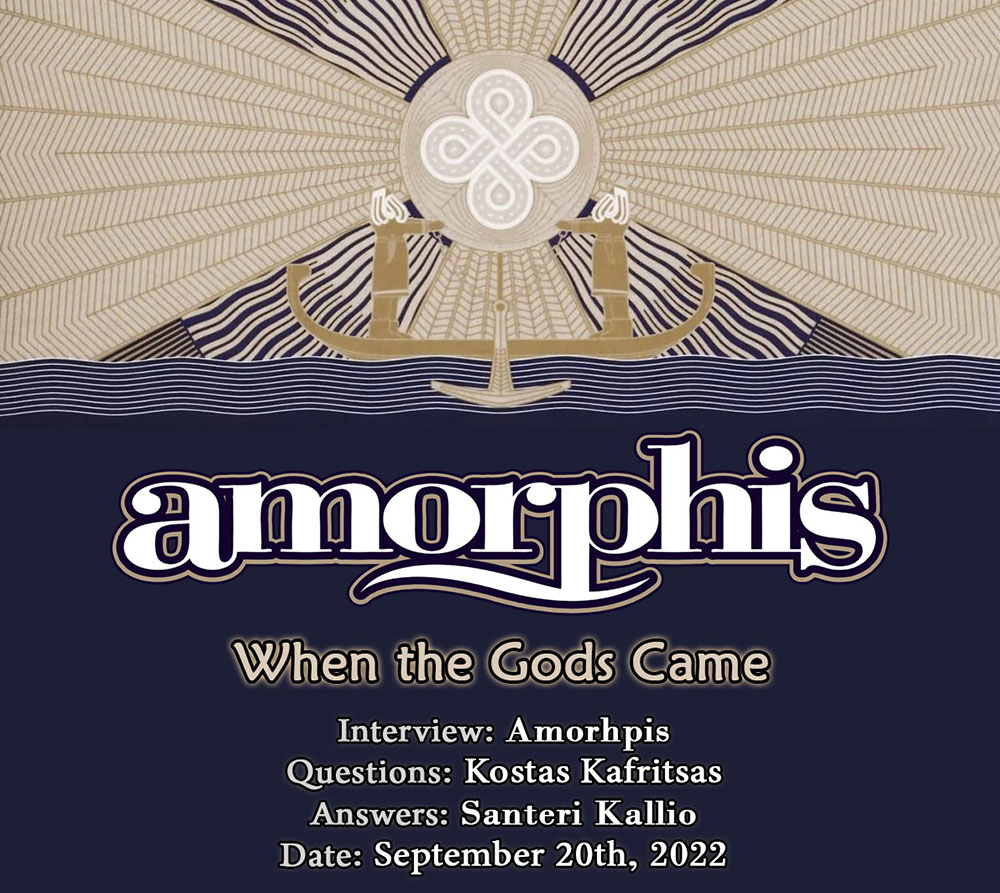 AMORPHIS need no special introduction. A few months ago they released their new album, “Halo”, and needless to admit, every audition to this album seems to be a very beneficial one. We had the opportunity to talk to the band’s keyboardist Santeri Kallio, who counts more that 25 years in the band, revealing important information about the Finns’ past and present. Enjoy…

– Hello Santeri! How are you?

Santeri: I’m very well, thank you. I feel great. A lot of interviews, ongoing interviews, on the occasion of our new release you will see us soon on several websites and magazines!

– It must have been very busy for you guys with the new album…how do you feel? Some sort of relief I suppose?

Santeri: The relief came already much earlier, around last fall, when we heard the album and since then some videos started to come out, so we started to realize it too. Therefore, we started promoting our album quite some time ago. However, in the last few weeks things have started to get even more exciting for us. Lots of reviews, people are talking about our new release, and we’re interested in reading the opinions of those who have been involved with our music. I think instead of relief, we feel a lot of excitement, that would be the right word to describe my own feelings as well.

– We were informed that you “cut” about 30 songs to come up with the current tracklist. Is this a normal process you follow on every album? And how did you end up with the ones you finally kept?

Santeri: That’s true. We’ve always had quite a few songs, every album we’ve had selections, close to 20 on average, this time we went over 30. I don’t think that’s a problem, on the contrary it’s great to have a wide variety of compositions, as our music is multi-dimensional. This way, we have a lot of room for ideas, for many different ideas, it’s really hard to imagine that with four composers we could limit ourselves to 10 songs for example. Luckily we are no longer the ones who make the choice of the tracks that will eventually make it onto the album, we have decided that our producer has the first and last word. Our producer has the burden of choice and by highlighting the appropriate tracklist, he has to convince us that this is the best possible choice. We all have an opinion of course, and a strong one at that I must admit. I’m sure that if it were up to us, we would have constant conflicts over which songs to choose, thus causing us tremendous stress and forcing us to eventually compromise with each other, which would not work to the benefit of our work. We are lucky to have a talented producer who knows how to do it and also wants to do it. We’ve had some phases in our career where we’ve done it ourselves, like on “Silent Waters” and “Eclipse”, we’ve had great battles over which songs to put on the albums! Nobody wants to go back to those moments…

– What do you do with the “leftovers” so to say? Such demo tapes would be a real treasure I guess! Any possibility to release them sometime?

Santeri: Usually none of us brings back our old ideas after three to five years to be part of the next album. We generally look ahead, usually the band develops other ideas in the meantime. I personally use my ideas for other projects or totally reject them. But there is one track, a single track, from our new album, that didn’t make it during the “Under The Red Cloud” period and has come back to the forefront again, admittedly quite different. “My Name Is Night” from our new release, is this unique case in the history of AMORPHIS. Really crazy, after 7 years, this song made such a powerful comeback and is now included in “Halo”.

Santeri: There are several track titles on the album that could lend themselves to being album titles. We started with the cover artwork and the title “Halo” was a great fit. This circle of light metaphorically represents the state the band is in. We think we are in a very good period of our career, at the peak of our recognition in the last few years. The title is the best version of AMORPHIS, a dynamic word that reflects the content of the lyrics and our work in general and we are very proud of it.

– “Halo” sounds really vibrant, fresh and dynamic as always. Which are the elements that to your opinion differentiate this album from your previous ones, talking mostly from 2015 and on?

Santeri: When we started working with our producer, Jens, 7 years ago for “Under The Red Cloud”, we went into a process that took long time. We wanted to understand his concept, so in that sense it was an “exploratory” collaboration. Then, on “Queen Of Time”, we added some additional elements, especially in the composition part. For example, we had longer tracks, some melodies that Jens took and developed even more, overall the chemistry was better than the first album we worked with him. To get to “Halo”, which is a great balanced album. It’s the result of an ideal collaboration, our best moment, looking at these three albums. In “Halo” we bring out our strengths even more and that wasn’t always planned. For example, we didn’t plan beforehand to make our akbum so heavy and up-tempo, that was already part of the writing process and the ideas we had, those of us who composed. Also, the fact that the guitars are up front and play a leading role was something that came about effortlessly. The fact that this album is more progressive than the previous ones is also a feature. These variations were evident from the first ideas and demos we gave to Jens, maybe they were just emphasized a bit more during the whole production. Jens loves our heavy side and on “Halo” he found the space to bring it out to a superlative degree. We are generally in a very good phase of our career. We had a very successful tour for “Queen Of Time”, we are “bonding” with each other more and more, not only as musicians, but also as friends, we are maturing as a band and have recently added the concept of “spirituality” to everything we do. We look at the whole, the “musicality” and the artistry of it all.

– “Halo” closes a trilogy era, which includes “Under The Red Cloud” and “Queen Of Time”. Do you agree with this claim?

Santeri: It’s hard to think of such a thing. “Halo” is for me the beginning and not the end of an era. It sounds very fresh and maybe that description isn’t completely fair to it. The guitar parts are something different, the tracks are much tighter, longer and quite heavy. They also have this new element of progressive metal that is characteristic of this period and I already imagine the next steps and want to continue from where “Halo” ends. This work really represents who we are right now and what we want.  Maybe that fresh air has been in one or two of our albums, like “Eclipse”. I remember there was a lot of excitement on our part when it was released. So I have “Halo” in mind as a beginning of something. Maybe your description has a point, our label pointed out the same thing through the promotional material. I think we are talking about a trilogy on the basis of using the same producer for the third consecutive album, we also have the same graphic designer, the same basis for the lyrical part and so on…

– Santeri, you’ve been in the band for almost 25 years. What do you enjoy most about playing in AMORPHIS?

Santeri: I love that there is a beautiful artistic freedom in AMORPHIS. Everyone can express themselves as they wish. There is no one giving instructions to the others. That’s what I remember being the culture of the band from the moment I joined, and it still characterizes us all today. We are all very open-minded and we are all friends with each other after 30 years. That artistic freedom is great, whether it’s in songwriting, recording, gigs, even how one dresses. I enjoy the fact that we have a band without a big plan, a leader, pressure on each other. I’m proud of that.

– If you could go back in time and relive one of the most beautiful eras of the band, for which album would you do it and why?

Santeri: Oh! That’s a very good question… Hm… Maybe I would choose to turn back the time to an American tour in our early live days. When you’re still young you enjoy concerts and touring in general more. In fact, AMORPHIS had asked me, while I was still not in the band, to join the American tour for “Tales From The Thousand Lakes” as a keyboard player and I was busy with my former band, so I didn’t make it. Maybe that was a nice memory to have.

– Thank you for the interesting discussion Santeri! The last words are yours, please leave a message to your Greek friends.

Santeri: Hello everyone in beautiful Greece, check out our new album, I promise you will be surprised. I hope we can make it through your country and see you in person, take care! Bye!