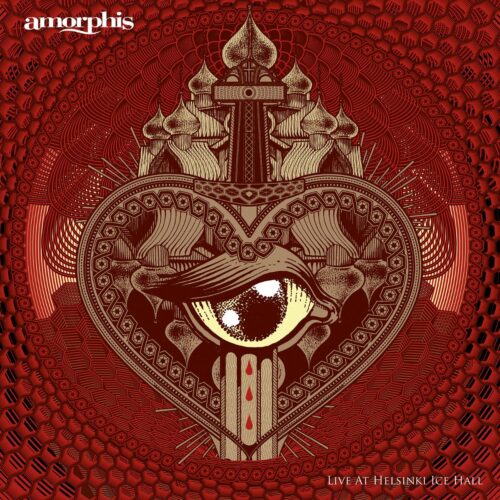 And while the pandemic is well underway and concert activities are zero to minimal, AMORPHIS hit us where it really hurts, giving us a live release, reminding us this way how much we miss the energy and the dynamics of concerts.

It should be noted that “Live At Helsinki Ice Hall” is not the band’s first live album, as the Finns have already released “Forging The Land Of Thousand Lakes” and “An Evening With Friends at Huvila” relatively recently. However, we can consider that due to the nature and limitations of these two releases (the first one was released only on vinyl and in 500 copies and the second one concerned acoustic performances), that “Live At Helsinki Ice Hall” is the most complete and representative live release of AMORPHIS in their 30 years of history.

The album was recorded just before the coronavirus pandemic broke out, specifically on December 7, 2019 and it is more than satisfying. Double cd (also released on double vinyl, but only included in the “Vinyl Collection 2006 – 2020 boxset”), it contains 15 tracks with a duration close to 90 minutes, a very nice booklet, and in general everything seems very well done and of high quality.

In the musical part and in the relative demand for a live release, the sound is flawless, absolutely clean and AMORPHIS manage to maintain the studio atmosphere in a good and convincing level. Every instrument, the keyboards, the guitars, the bass and the vocals, sounds crystal clear and it seems that the band invested a lot in the production and in general in this release. This is important when one adds to the equation the fact that many bands at the moment are essentially inactive and such attempts in some cases are aimed at the short-term financial survival of the artists alone. This release seems far from such intention.

Maybe what I miss a little bit in the sound is the interactivity with the audience and the “voice of the crowd”. It’s obvious that the weight in terms of production falls exclusively on the band and I guess this has been done quite consciously. A second point I would like to point out is the abundance of tracks from the recent “Queen Of Time”. I count 6 tracks from this album. For a band with such a rich discography it could be better if more space was given to other albums. For example, there is a lack of tracks from very good albums of AMORPHIS, like “The Beginning Of Times” and “Silent Waters”.

My favourite moments and top performances in my opinion are “House Of Sleep”, “Daughter Of Hate”, “Sampo”, “The Bee” and “Silver Bride”. In conclusion, this is undoubtedly a high quality release that is addressed to the fans of melodic Death Metal, the fans of AMORPHIS and to those who have the desire to listen and see the band live and have not managed to do so so far. It is therefore highly recommended…

Marilyn Manson – We Are Chaos