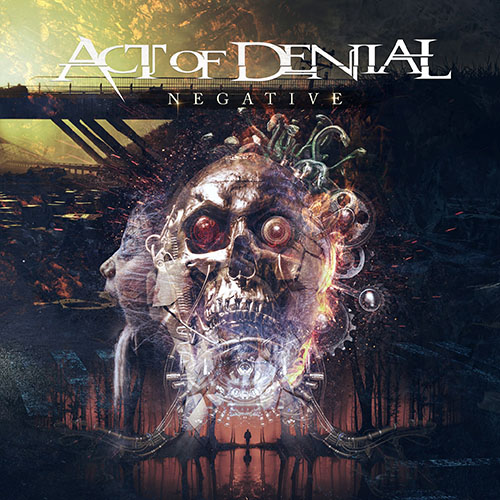 First ACT OF DENIAL album, actually I was waiting for it with great anticipation. ACT OF DENIAL is a project of strong names of our scene. Just think of what kind of expectations can come out when SOILWORK vocalist Bjorn Strid, Steve Di Giorgio of TESTAMENT, John Lönnmyr of THE NIGHT FLIGHT ORCHESTRA and Kerim Lechner of  SEPTIC FLESH join forces. The line up is completed by Croatian guitarists Voi Cox and Luger of KOZIAK, who are actually the driving force of the group.

Let’s get straight to the point, which is none other than the musical direction of the band. ACT OF DENIAL combine melodic death metal of the Swedish scene with the American modern groove/death sound, and, although they are not pioneers in terms of inspiration and authenticity (this particular musical genre has been over used in the last decade), they are really attractive and convincing. Inevitably, they reminded me of SOILWORK, SCAR SYMMETRY and TRIVIUM, and in more specific during periods of “Shogun” and “In Waves” albums.

“Negative” starts as it certainly should, with a full throttle on “Puzzle Heart”, which has also been released as a music video. Representative of what we can hear throughout the album is the next “Controlled”, entering in full melody, with a highlight being DEATH’s Bobby Koelble’s solo. “In The Depths Of Destruction” to follow, and the tension drops, with the track starting in a mid tempo way, with a slow guitar riff and speeding up as it progresses. Great changes and alternations, with nice keyboard touches.

And we come to the next four songs, halfway through the album, where the real game is on. “Negative”, “Slave”, “Lost Circle” and “Reflection Wall” are undoubtedly the best moments of the album. The first one, is the epitomy of the group’s sound, with the second one coming out of SOILWORK’s softer years, being the most “commercial” version of ACT OF DENIAL. “Lost Circle” and “Reflection Wall” stand out for their wonderful chorus, they are kind of tracks that one would think could easily be part of SOILWORK’s “The Living Infinite”.

The album closes with the powerful “Your Dark Desires”, one of the hardest tracks of “Negative”, with the participation of Ron Thal Bumblefoot (SONS OF APOLLO) and the vocally interesting “Clutching At Rays Of The Light”, where Bjorn tries out a wide range of vocal lines, with complete success and conviction.

A listen to the album is a must in my opinion. Fans of the Gothenburg scene will have already checked it out, I’m sure… For the rest of you, start with “Slave”, “Lost Circle” and “Reflection Wall” to get into the swing of things and the rest will eventually come on its own.