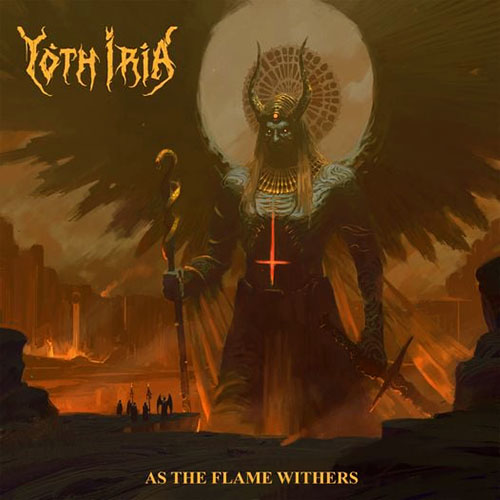 The announcement of Jim Mutilator’s return to discography after so many years with YOTH IRIA spread great enthusiasm, which was reinforced by the announcement that The Magus will be the band’s permanent vocalist. The musical result of this alliance was presented to us for the first time in January 2020 with “Under His Sway” EP, giving a first taste of the dark paths in which YOTH IRIA will travel us from now on. The band worked tirelessly and in November of the same year offered us the split with KAWIR, while at the same time completing the recordings of its first full length entitled “As the Flame Withers” and which we will try to present with this review.

From the first listen we realize YOTH IRIA’s bold attempt to incorporate several different elements of our favorite music into their sound, while The Magus and Mutilator marry them with the influences from their previous bands. Of course, there is the presence of Black Metal, which is combined harmoniously with classic Heavy Metal and Doom Metal presenting us a refreshing album of extreme metal. All these are filtered through YOTH IRIA’s personal artistic prism, fulfilling their new musical vision while they cross “fresh” sound paths. The eerieness by the keyboards contributes to the overall great dark atmosphere and The Magus singing performance is awesome, standing out especially for his theatrical vocals. Responsible for the precise and beautifully layered production is George Emmanuel, who has also done a fantastic guitar work in the album (especially in solos).

YOTH IRIA offers us an impeccable record in its entirety, that looks into the future without being nostalgic at the same time. “As the Flame Withers” is characterized for its diversity in the compositions and it is so well crafted and multidimensional that it could be the link of the past and the future for Greek Black Metal. An album, which besides being the first dark chapter in the band’s discography, is also the continuation of Mutilator’s and The Magus’ great musical heritage.