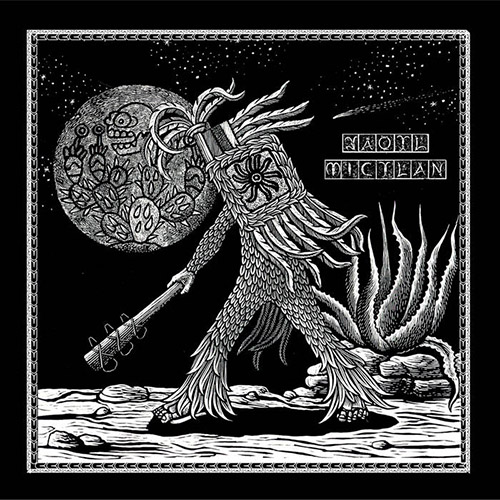 I do not hide the fact that bands from Central and South America have always “touched” me. Even more, when their thematology has to do with local traditions, myths and generally their rich history. A new (for me) discovery is the Mexicans YAOTL MICTLAN, although they have existed since 1999 and have two other albums. The “Sagrada Tierra Del Jaguar”, then, is their third attempt, ten years after the “Dentro Del Manto Gris De Chaac”.

Facing the simple, black and white, but also so fitting cover, you get straight to the point. YAOTL MICTLAN, which by the way means “fighters from the land of the dead”,have the intention of taking us to the time of the Maya, Aztecs and other cultures of their continent. Tell us myths and legends about forgotten gods, like the terrible Tezcatlipoca, the god of darkness, magic and war who took the form of a jaguar and exterminated his opponents with his magic smoking mirror. Musically, we are dealing with 55 minutes of mid-tempo (mainly, without missing fast sections) Folk / Pagan Black Metal with a special, warm sound.

The Mexican trio makes me believe strongly that it has a very deep connection with its descendancy and tradition. They do not have this conjunctural, “tourist” smell that characterize many bands in this genre. The album conveys a majestic, mysterious feeling with seriousness and character. A transcendental awe, just as if you were facing one of the pyramids planted in the jungle…. And to be clear, YAOTL MICTLAN created an album that is simple, solid, epic and monolithic, following the minimalist aesthetic of the huge Quorthon, while avoiding the extravagant festive approach of the majority of the modern Viking/Folk «Black» Metal scene. As a result of all this, the listener is rewarded with top songs such as the opening “Entre lluvias Fuertes”, which puts you directly in the mood with the epic, slow introduction and wonderful brass sections. Or the awesome “Nuevo Fuego” with the emotional, lonely break in the middle of its duration. There are moments that stick in the mind with some anthology riffing, such as at 4:50 of “Tezcatlipoca – Espejo Relumbrante”, where the speeds go up. Or the porous riff at 2:18 of “K’inich Janaab ‘Pakal”. Sure, due to the long duration, there are some more mediocre moments, but they are just “moments”. The average is very high.

I consider the last two amazing compositions as the highlight of “Sagrada Tierra Del Jaguar”. Initially, “Buho lanzadardos – Entrada Teotihuacana” with the BOLZER-ic outbursts and the EPIC cuts with the hymnlike vocals, which is followed by the incredible ten-minute epic “Sombra Del Mictlan”, which captures you with its ritual atmosphere.

All in all, this is a great effort, which makes me want to look into their previous discography, but also forward to their next step. I really have expectations for something very strong.