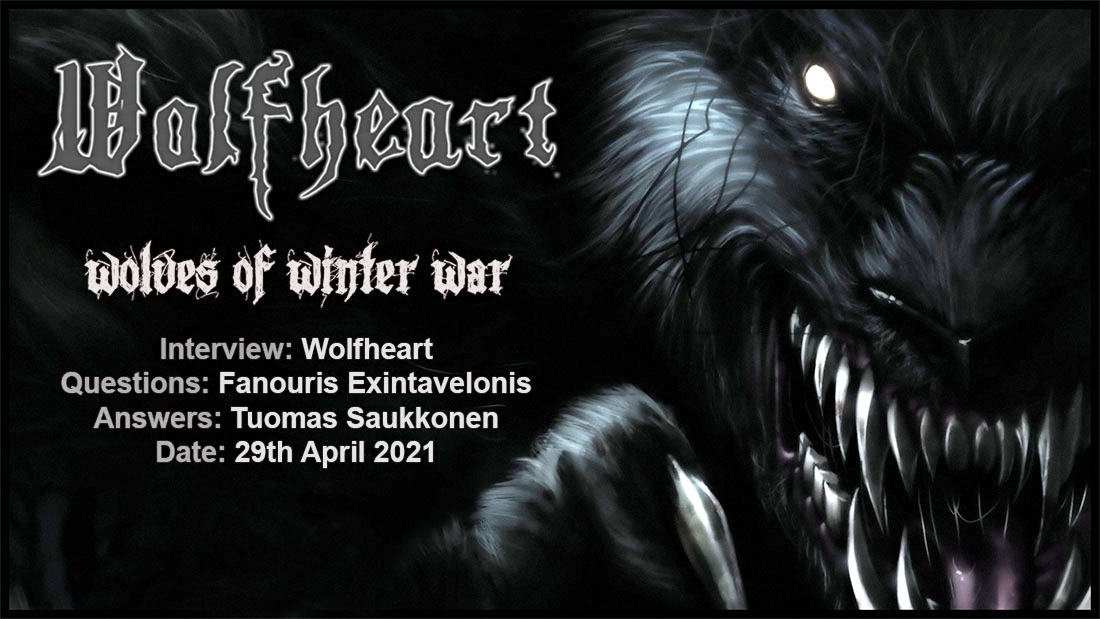 WOLFHEART, is the most recent band of the multi-talented and really busy musician Tuomas Saukkonen, known for many of his projects, including BEFORE THE DAWN, DAWN OF SOLACE and BLACK SUN AEON. On the occasion of the release of WOLFHEART’s latest album, “Wolves Of Karelia”, but also concerning “Waves” of DAWN OF SOLACE, THE GALLERY Web Magazine came in contact with him. Let’s see what he told us in a very interesting conversation.

– Good evening and thank you for talking with us Tuomas. I hope you are well.

Tuomas: Good evening and thank you too! Yes everything is very good!

– Let’s start with WOLFHEART’s latest album, “Wolves Of Karelia” which was released last year and received very good reviews. How do you feel about the acceptance of the metal community?

Tuomas: The truth is that “Wolves Of Karelia” went really well. Both the press and the band’s friends were very positive, which shows that we did something right. Orders still continue, despite the difficulties due to the pandemic, and that can only be enjoyable!

– This was your first album with the participation of your new guitarist, the Greek Vagelis Karzis. How was your collaboration with him?

Tuomas: It was amazing. Besides, I already knew Vagelis and our collaboration was perfect. He is a very good guy and a very good guitarist. His work can be seen on the album, of course! At the same time, he did the backing vocals for three songs, in which he was also fantastic!

– What was your main inspiration when you started writing this album?

Tuomas: This is essentially the history of the area where I come from. Karelia is a small Finnish region on the border with Russia. During World War II, 1939-40, a great battle took place in this small area against the much larger and more powerful Russian army, in which our resistance was very strong. Cannons from this battle are still preserved in Karelia. In the album I describe exactly this battle and its meanings. Heroism and death. I would describe it more as a soundtrack than as a simple concept album.

– Do you think that it is easier for you to write music mainly for WOLFHEART now, since a few years ago you announced that you are quitting the other bands in which you participated?

Tuomas: The good thing about WOLFHEART is that the style of music I can write is broader. Probably you have already noticed how different the albums are from each other. We use elements from melodic Death Metal to melodic Black Metal and even Doom Metal. However, there are things I have written that would not suit WOLFHEART either. But WOLFHEART are definitely more flexible as a band and this has many advantages.

– Do you get what you want from BEFORE THE DAWN, now that you are are just making some random appearances? How does it feel being without other obligations that would force you to dissolve this band?

Tuomas: To tell you the truth, every time we played live, it was a great feeling to be on stage with the others and I missed presenting these songs live. I really enjoyed playing them. But despite the satisfaction I felt, the reasons why BEFORE THE DAWN was dissolved still exist. So, a live with BEFORE THE DAWN is a mixture of emotions. You cannot have the good part without the bad one.

– Last year, DAWN OF SOLACE have also released a new album. You are responsible for all the instruments, except for the clear vocals, performed by Mikko Heikkilä and some guest musicians in some songs. How was this new album accepted by the fans? Does this mean that the band should be considered active again?

– Could this unexpected DAWN OF SOLACE album mean that we could maybe expect something from BLACK SUN AEON in the future?

– You have mentioned in a previous interview concerning “Tyhyys” that you were already preparing the next WOLFHEART album in your mind. Could something similar happen for the successor to “Wolves Of Karelia”?

Tuomas: As I told you before, I never stop thinking and writing music. Sometimes my ideas match what I want to do with WOLFHEART, sometimes not. But the truth is that something is already being prepared for the immediate future of WOLFHEART!

– Do you think that music, since it is part of a global industry, say business, influences the way you express yourself through it or do you ultimately present what you want to present and you do it regardless of anything else?

Tuomas: I always negotiate contracts with companies in such a way that I have a lot of artistic freedom. So I’m free from companies and management to do things my own way, the way I think it will help me get the result I want. Music becomes “business” only from the moment I deliver the material to the company. Until then, from writing to recording, is purely music. This helps me expressing myself, but it is also exactly what I want in the end. The product is business, but its creation is not!

– You have directed most of the videos that accompany WOLFHEART songs. Is there a specific reason for doing that?

Tuomas: To be precise, I have directed ALL the WOLFHEART videos (laughs). The reason is simple and mainly it is economic. I prefer to invest the money I have as a budget in a better production or in something else that I will consider more immediate or important. So, I come up with ideas, I direct them, and to be honest, it’s really fun.

– Have you ever considered directing something bigger? Let’s say a documentary about WOLFHEART but also all the projects you had and still have?

Tuomas: No, no… This is not something I have in my plans. Apart from being time consuming, the process for something so big is different and I do not know if I would like to go into the process of doing something similar.

– After the end of the pandemic, what are the band’s plans? What should we expect from WOLFHEART and, is Greece in your future touring plans?

Tuomas: This remains a big question. We still do not know what will happen to the spring and summer festivals, we have some dates of course closed for autumn, September and October. But I do not think that starting a tour right away is possible. We will return on touring as soon as it is safe and I believe that we will see our Greek friends up close when this happens.

– During the pandemic, you were one of the first bands to perform an online concert. How did you feel when you did that?

Tuomas: If I’m not mistaken, WOLFHEART were the first to do such a concert, last spring. It was something that brought you closer to the audience in its own way and maybe something that helped to inspire some of the listeners. An original experience without a doubt, with different emotions from those of a real concert, however.

– Thank you very much for your presence at THE GALLERY Web Magazine pages Tuomas! It was a wonderful experience talking to you! One last thing you would like to share with our readers worldwide..?

Tuomas: Stay safe, the virus has come and will go away and I hope to talk to you again soon!