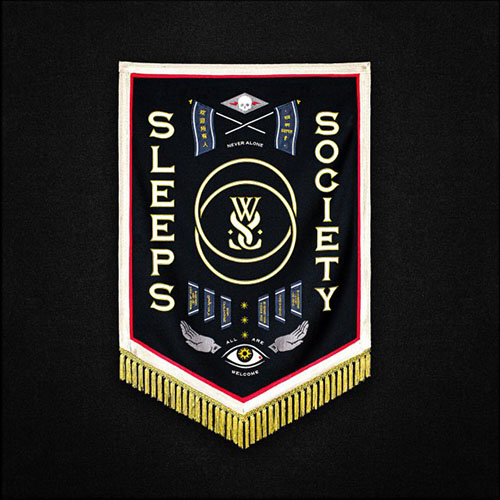 “Sleeps Society” is the fifth studio album by British Metalcore band WHILE SHE SLEEPS. It was released on 16 April 2021, through the band’s independent label Sleeps Brothers, in collaboration with Search and Destroy, Spinefarm Records, UNFD, and Universal Music. Three years ago, WHILE SHE SLEEPS had just come off their most successful cycle yet. 2017’s “You Are We” led them to the top of the genre they serve.

“Sleeps Society”, which is named after the band’s Patreon platform, sees them continuing to chip away at those preconceived expectations. Opener “Enlightenment(?)”, a song that warns against the constant pursuit of perfection, starts with a nice riff that gives way to an electronic sound in the song’s final part. A filthy, acid sound pervades throughout the title track, and “Systematic”, a nu metal song that’s weightier of all songs in the album, hits like an aftershock, complete with rapping, turntable scratching and cheerleader chants. More straightforward moments like “Call Of The Void” and  “No Defeat For The Brave”, which throw back to the “Brainwashed” era, feel like the least interesting material here.

The biggest surprise, however, comes with seven-minute last song of the disk “DN3 3HT”. Over a strange music line and an intense piano, each bandmember offers a message to their fans with words of appreciation and encouragement for those struggling through hard times.

WHILE SHE SLEEPS have undeniably been one of the bigger success stories of the last decade within UK Metalcore. They’ve faced their share of adversity and persevered through it all thanks to their fiercely independent drive and ethic. This attitude has been the constant driving force for WHILE SHE SLEEPS alongside their deep connection with their fans. This has now been taken a step further with the launch of their fifth full length album.