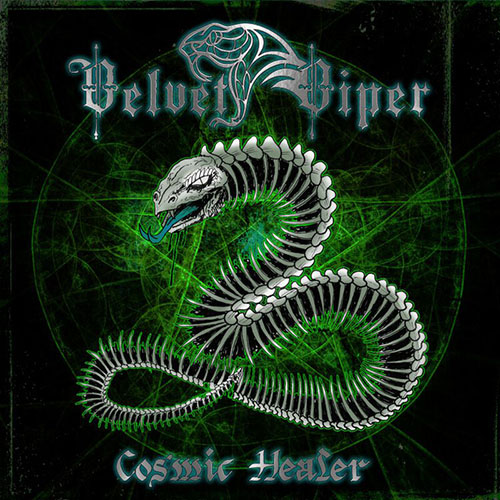 The German Heavy / Power Metallers VELVET VIPER are not unknown in the Power Metal circles, as they released their selt-titlet debut in the distant 1991 and their second album in 1992. The band went inactive for 16 whole years and returned in 2018 dynamically by releasing within three years five complete albums, with the latest being this year’s “Cosmic Healer”.

The album consists of ten compositions plus an acoustic performance of their song “Götterdämmerung”. What catches your attention from the beginning is the freshness that VELVET VIPER brings out. A dynamism and a modern feeling in their music, despite their many years of presence (and absence). The drums are fast and perfectly synchronized, the guitars are full but if anything steals the show it is Jutta Weinhold’s vocals as the band is female fronted, something we do not often meet in Power Metal bands.

The album starts with the stormy “Sword Sister” to continue in the same tempo with “Let Metal Be Your Master”, a purely concert / fan song, while the rhythms remain high almost throughout the album. Standout tracks are the “Holy Snake Mother”, “Osiris” with an oriental spirit, “Long Shadows” and the very beautiful acoustic closing of the album, the “Götterdämmerung” that we have already mentioned.

Although VELVET VIPER are not original in the sense that they do not drive the genre they represent a step further, their album  comes as a warm suggestion to the friends of the band and Power Metal in general, which will keep them pleasant company throughout its whole duration.

Enshadowed – Stare Into The Abyss