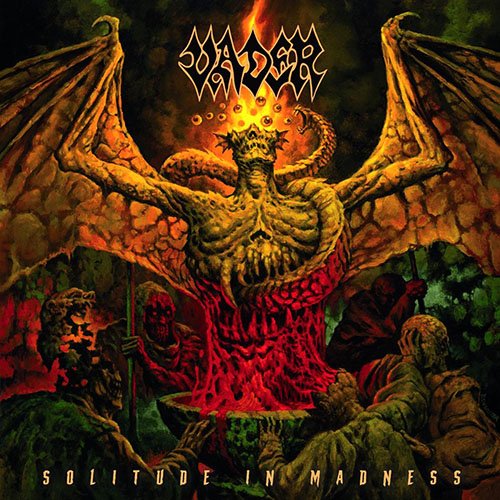 Polish Death Metal veterans VADER do not need any special recommendations. A band created in 1983 and started as a Heavy/Speed Metal group, released its first demo in 1988 and, having three amazing first records (not that in the coming years they didn’t release good albums), “The Ultimate Incantation”, “De Profundis” and “Black To The Blind”, they were established for good in the Death Metal scene. Four years after their 2016 album “The Empire”, Mr. Peter Wiwczarek (the only remaining original member of VADER) and his crew are returning with their new violent album “Solitude In Madness”.

The album starts, of course, aggressively with “Shock And Awe”, which is a clear statement from the Poles that 29 minutes of destruction will follow. VADER are charging intensity by starting a Death/Thrash hell with stormy rhythms that won’t let you breathe. At the meantime, the mid-tempo parts that would give you some air, are missing! Anyone who is looking for melodies would be better to overpass this album, as we are talking about a brutal violent album by the masters of the genre. Guitars and the whole rhythm section are furious, in their well-known flattening style that will definitely cause neck injury from the massive headbanging. The characteristic Wiwczarek’s vocals sounds are also imposing.

The intense rhythm of “Solitude In Madness” is interrupted in some compositions by breakdowns (reminds me of OBITUARY) and extremely guitar solos that show their technical capability and a hidden love for classical Heavy Metal. A love that becomes even more obvious in their “Emptiness” song, with the Heavy Metal influences of VADER being pretty intense through their Death Metal filter. It should be added that “Solitude In Madness owes its great sound to the excellent production. In addition with the beautiful cover, it includes a cover of “Dancing In The slaughter House»,  a song by Poland’s ThrashMetal/Crossover band ACID DRINKERS.

The truth is that VADER have never released a mediocre or a bad album, fact that doesn’t change with “Solitude In Madness”. With their new record, VADER in just half an hour manage to offer us a high-quality Death Metal album that other bands can’t even manage to do in a whole hour. In “Solitude In Madness” VADER do not change their sound and style and they do not try to experiment to attract new fans. They keep on being “stubborn” 37 years after their creation and that’s why we love them!

Rhapsody Of Fire – The Eighth Mountain

Yoth Iria – Under His Sway