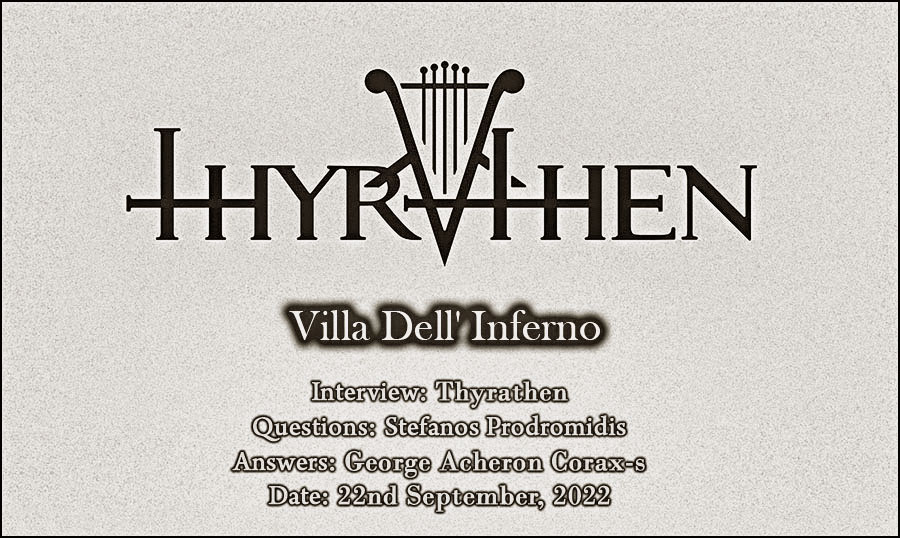 On the occasion of THYRATHEN’s recent release entitled “Thanatopsis” which had a great impact at the global Black Metal scene, we had the chance to talk with Corax S. about this new project that includes famous Greek Extreme Metal musicians and learn more about this band!

– Good evening George, congratulations on your first achievement as THYRATHEN! What do you think about the public response to the album far? Are you happy with where it’s come so far?

Corax S: Good evening Stefanos. Thank you very much, on the one hand, for the invitation-interview and on the other, for the very nice words of compliment about our band. If the scene is indeed shooked, and if it is indeed considered an “achievement”, then it means that it is probably something good. You give us courage to continue and we thank you again. We are certainly excited by the impact that our debut had, with the wide response of the public but also of course with the very beautiful reviews with which it received a progressive and consistent popularity, combined of course with the fact that it appeared in the highest ranks of lists of 2021 as one of the best albums of the year.

– Can you tell us a few words about how you all made the decision to create the band together? how did you come up with the idea to deliver something let’s say so poetic in combination with Extreme Metal?

Corax S: In fact, that was my original intention from the moment we brought the band back from the ice. This project went through many stages, in different periods of our lives and at last remained the distillation of all these years, as we now listen to it today in its final form. The band went through another crisis since 2 of its members decided to leave. Nevertheless, paradoxically, in our case this had a catalytic and also positive effect in order for us to achieve my original intention of lyricism, of a narrative character-often with poetic content, but also especially philosophical, filtered through the light of ancient tragedy and of course under the skin of “diachronic black metal”. I hope we succeeded and clearly there were several artists involved in all this, and particularly, on the one hand our singers-narrators, as of known value, such as Stefan Necroabyssious from VARATHRON, etc. and Alexandros from MACABRE OMEN, etc., and on the other hand, the so-called “Lyrical Line-Up” of the band, which consists of 5 artists and in particular: an actress and a soprano singer, male voices, choirs, and in addition handmade ancient Greek musical instruments, like lyre (of Apollo) and double reed pipes & tympanum of (Dionysus). We are also proud for the fact that we don’t use keys or synths at all and the eventual atmosphere and the melody that the keys may offer, is in our case achieved through the Lyrical line-up.

– Regarding the name of the band, how was it chosen and what does it represent?

Corax S: The name is a Greek word, literally it means “outside the door” and it was used as an adverb of contrast in the Middle Ages, where it characterized those who had a non-ecclesiastical character, that is, those who had a cosmic character and therefore more or less the non-Christians. Therefore, it is a name that expresses the band, which after all mainly deals with philosophy (specifically with Epicureanism), history but also poetry (in this case, ancient tragedy).

– You are also one of the bands that released material in the middle of the pandemic… the classic question is, how did this affect you? from the creation of the band, the recordings and even the release in physical format.

Corax S: It was a very difficult time for all of us. The truth is that unambiguously for the band exclusively it had a positive effect because we had a lot of free time to put all our thoughts in order to move on and finalize this whole project, as a complete work of art which has a beginning, a thesis, and an end. At the same time, during the same period we went through the aforementioned drastic changes of the band members, but the same period proved useful for providing us the time and ability to record our album, for which, by the way, at least 5 studios around the world were used , which in their entirety were managed with real mastery and titanic patience by Achilleas (the Sound-Doc.) Kalantzis, as the co-producer, who of course did the entire mix and the Mastering too. The agreement with VAN RECORDS was an absolute choice for sure, since it is a label with a well-known history and is established for its wonderful and special releases.

– How exactly did you try to approach this project musically? from the beginning and before the release of the first album it was heard that it would be Black Metal but of quite distinctive style. What did you have in mind and how do you see the result?

Corax S: I am of the opinion that whatever we do in life, we should do it well. Therefore, personally, whatever I do and give my soul and body to it, I think I should do it as best as I can, so that I can first feel good with myself and for the outcome to be transferred it in the best possible way, under my prism, to whom it may concern. I admit that I set very high standards, (something we also had as a philosophy with my previous band [Jackal’s truth]), in order to achieve the purpose and goal, and I think that everyone who contributed and participated in “ThanatOpsis” feel truly satisfied, if not proud. Personally, in my mind (aim and goal) I had to play and compose music again after decades, which would contribute in its own way to the Greek scene that I loved so much since I was a child, and in addition that would have something to say in the world, perhaps something different, both in music and lyrics. As for the result, it’s something that usually speaks of itself, but personally I feel proud of everything that we finally delivered.

– Apart from the obviously special musical approaches to your new material, the lyrical part is equally interesting. In what ways did you move in this regard and what did you want to say with the album in a meaningful way?

Corax S: Thank you very much for the term “special”. The truth is that I often refer to the album as a project or a complete work of art, because, in addition to its music approach, it is also an album, as I said earlier, complete as a concept, divided into 2 chapters (and as a double LP), of educational character, since it is more or less a book, with references for explanations and bibliography cited, the script of which involved an extensive and thorough academic research and translations that I did all by myself.

– What would you say this project has that the bands, you’re involved with, don’t? what makes it different and special?

Corax S: Everyone in his own band lays down his own soul. Certainly, for me to be a fan of VARATHRON, MACABRE OMEN and KAWIR from the age of 14-15 until today, it probably means that our souls and also our roles in this particular band match, since personally THYRATHEN is my only band.

– Can anyone consider that THYRATHEN is also a live band or will it remain as a studio band with only studio releases?

Corax S: Certainly, the purpose of the band includes concerts in its list. We would never attempt to compose music that we don’t like/want or couldn’t perform live on stage.

– It might be early for this question but I’ll give it a try. What can we expect from THYRATHEN in the near future?

Corax S: The band is in action while, as we have already announced, on guitars and bass Noch (Thomas Paparizos from Black Winter) replaced A.Z. who participated in the recordings “ThanatOpsis”. We are already in the pre-production of our new material since the summer of 2021 which we hope to complete in the near future. From then on and as long as our second project-album is completed, we will then be available to focus on concerts.

– Thank you very much for your time and I really wish the best for the continuation of the band! The last words are yours.

Corax S: I sincerely thank you for the invitation and the step you are giving me to talk about the THYRATHEN alliance and I return the wishes for the best continuation to you personally, as well as good continuation to THE GALLERY, which is one of the best groups, blogs, channels, with character, idiosyncrasy and a very beautiful atmosphere. Evohe!

The Norwegian Tons Of Rock festival has been announced with IRON MAIDEN as headliners!