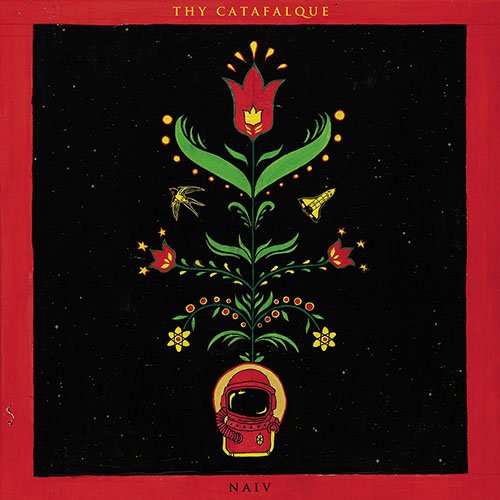 THY CATAFALQUE is the wagon of music expression by the much talented, Hungarian multi-instrumentalist and photographer Tamas Katai and “Naïve” is their 9th work. “Naïve” is a term to describe someone who is “simpleminded” and “artless” but is also a term to define a visual art that is created by a person who lacks the formal education and training that a professional artist undergoes. This is quite a paradox, because “Naiv” is diverse and complicated.

“Naiv” starts quite dynamic with “A Bolyongas Ideje”, with Zoltan Conya on vocals and goes on with wacky and crazy “Tsitsushka”, where Balasz Hermann (a.k.a Bado Reti), with his fretless bass holds a party, accompanied by a saxophone and a trombone and converts the song into a space jazz jam (to put on a label in order to be understood, more or less). “Embersolyom” is a cover song to KALAKA’s folk original, which we heard back in 1998, based on a poem by Anna Kiss. Things get calmer with instrumental “Szamtalan Szinek”, to lift off again with “A Valosag Kazamatal”, where a small string feast is held again with the participation of oud, guitars, cellos, some harsh vocals and the essential for meditation, space keyboards.

The bucolic intro of “Kek Madar” brings us back to the roots of Eastern Europe’s folk music with New Age elements strongly influenced by Vangelis, almost six minutes of relaxation to blast again with “Naput” a dark, gothic, but rhythmic and galloping at the same time song, with the participation of Martina Veronika Horvath on vocals. “Veto” holds almost 8 minutes, starts dynamic to evolve into an uplifting beat, then gears down and levitates into space, only to finish just like the way it started, fulfilling an astral journey. The last song” Szelvesz” (Tempest) is the most straight-forward metal song of the record, a progressive song that would turn green with envy many bands, while the vocals by Gyula Vasvari reminded a lot of VINTERSORG.

I am following THY CATAFALQUE for quite a long time and I must admit that I am impressed by Tama’s ampleness of thoughts, the richness of his inspiration and how indestructible he stands within the music industry. He manages to mix and graft many motley music genres from Jazz to Folk, World, Electronic, Dark, Metal, New Age without losing his target, to create music for music and listeners. “Naiv” was recorded in several places, such as Edinburgh, Budapest, Debrecen and Athens among others and the mixing, production and mastering were arranged by Tamas himself, with only dark spot the use of drum machine instead of a proper human drummer. Fortunately, this plastic feeling is overlaid by the warmth of the analogue and eerie at the same time, keyboards. I would dare to put THY CATAFALQUE (and forgive me about my audacity) in the same room with ORANSII PAZUZU, IGORRR and even our guys, HAIL SPIRIT NOIR, as far as their ability to evolve and transform. I don’t know if there will be any impact to the metal audience and if there will be a feedback, but I’m sure that THY CATAFALQUE are passing by these issues on the way to their musical completion. Gratulalok Katai urnak!