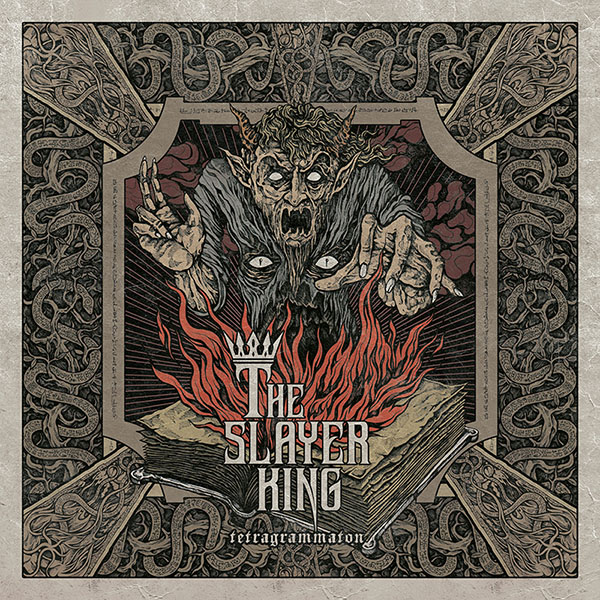 After putting the legendary NIGHTFALL on hold, the bands leader Efthimis Karadimas decided to start exploring new music paths, so he proceeded in the formation of his new band under the name THE SLAYERKING. A band, that few things has in common with NIGHTFALL if you need my personal opinion, as I follow them since the beginning and I should comment that they ride on a better road in every way, with better artwork, productions and bigger and more often live shows all around Greece.

After the debut album “Sanatana Dharma” in 2016 and while their name has started spreading in the underground circles, mostly because of the impressive live shows, the time has come for the second hit with “Tetragrammaton” that is being released now.

So, the new album, even if it follows its predecessor, it surely goes way ahead in everything. Production, compositions and obviously it is more mature and progressed. After a small intro, the mayhem beings, guitars (vintage, down tuned) and bass from the earths guts, out of this world vocals and thick drums put us straight into the dark and horror atmosphere that the band intended to create. Their influences (just to give you a better idea of what’s going on) include Celtic Frost (ok, maybe more Triptykon), Black Sabbath (obviously, didn’t have to mention that), but also Pentagram and Saint Vitus for the more rocky 70’s elements (yeah, they have those too) are everywhere with the help of a great production by Marcus Jidell (Avatarium, ex- Royal Hunt, ex- Evergrey) in Sweden everything is audible with intense clarity and heaviness. The lyrics are of course appropriate to the mood, pessimism, negativity, demonism, spiritualism and the endless battle of man for freedom in every level.

The titles are characteristic and detailed, with the best being at the epic opening track “Story of the Snake Who Grew Legs and Became a Lizard – The Slayerking”, the ritualistic “Where I Saw You Last Time Bleeding – Revelation” and the traditional “Under the Spell of Alice and Her Virgin Sin – The Expulsion” somewhere before the end.

Along with Efthimis, the lineup also consists of Kostas Kiriakopoulos (also ex-Nightfall) on guitars and George Karlito on drums.
Finally, I will sum up by saying that here we have another great record from a greek band that its getting ready for big things, the fans of the mentioned bands above should definitely check them out and definitely see them live when you have the chance!!! 666 Thumbs up!!

Vltimas – Something Wicked Marches In