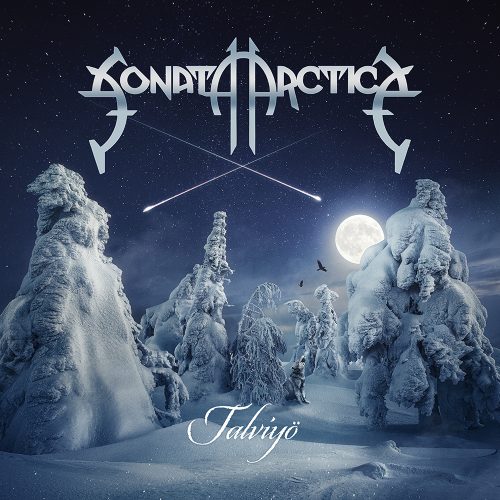 Talviyö… Winter night in English. Twenty years after their first Full Length, “Ecliptica” and three since their latest effort, the Finnish band SONATA ARCTICA, one of Europe’s most known melodic Power Metal bands, are back with a new album. They are back to enchant us once again with their well-known melodies and explosive fast sounds. Having released some awesome albums in the past, such as “Winterheart’s Guild” and more, the speed is not as fast nowadays.

Their tenth album is deeply melodic, nostalgic and theatrical as we expected. But on the other hand it is slower and less dynamic than we wanted. The frantic beats that made the Power Metal idiom and the SONATA ARCTICA themselves famous, are not here in most of the album. There are some exceptions in “Demon’s Cage” or “Raven”, which are faster but in general this album is so slow that their listeners are making this joke where they are listening to SONATA ARCTICA on 1.25x speed nowadays. The truth is that the energy, the speed, the crazy catchy chorus, the heaviness are some of the things we wanted to hear, but unfortunately it didn’t happen that much in this record.

There are a lot of good times here and there. The first songs are old school SONATA ARCTICA stuff. “Message From The Sun”, “Whilrwind”, “Ismo’s Got Good Reactors”. And those tracks all have good moments, some good orchestrations. There are also some good progressive elements in some tracks, such as “Whirlwind”or “The Raven Still Flies With You”. Even in these, though, and throughout the album as a whole, we’d love something more. The moments that are supposed to be heavy are less heavy than we would like, for example. One of the highlights also is definitely the mid-tempo, melodic “Who Failed The Most”.

“Talviyö” is an album that has some good moments here and there but nothing more. It doesn’t even have the many catchy chorus we expected, it’s not that heavy, it’s slow enough, and the energy the band made themselves known for is not here at most of the record.

As I Lay Dying – Shaped By Fire