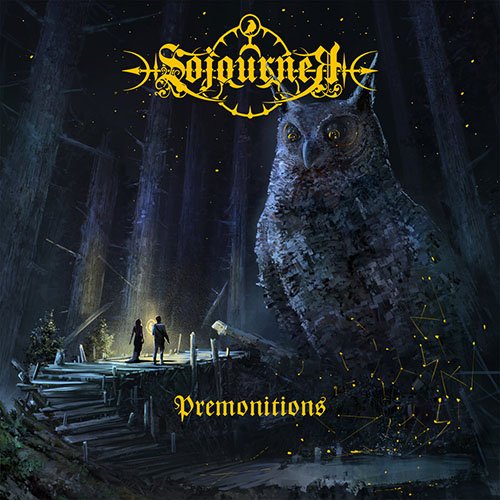 Formed in 2015 and having two great efforts in their assets, SOJOURNER (a band that comes from different countries), is here to proudly represent “the extreme atmospheric sound” for the year 2020 in “Premonitions”.

More than that, one could say. As they have stated, it was their intention not to sound like another Folk Metal band, since there are so many of them out there. That is why they focus on the extreme metal element, with the atmosphere framing, although it is an important one, just complementing this element. The album starts with an acoustic intro, piano and the velvety, clear vocals of Chloe Bray sounding the horn, enchanting the atmosphere, to be followed by a full musical contrast with more extreme sounds and Emilio Crespo’s completing the musical contrast. A musical contrast that is quite central to what this band is doing. Flute, piano, organ, and Chloe’s voice accentuate the band’s most Folk side, and long riffs along with growls emphasize this Black Metal side of theirs. Where the pure vocals will be introduced and where the growls will be, is something that is not entirely clear, but they seem to perform it in a perfect fashion. After all, the “between the bright and the dark side” experiment seems to tie in perfectly, and the transition from the first situation into the other one, are so smooth that you don’t even realize the change.

Simple, melodic music, staying away from prog experiments that other bands try. But at the same time, a music that has many layers and as you listen to each song again, you dig deeper and deeper to discover what is hidden there. SOJOURNER achieve the best of both worlds scenario. Especially the Folk elements, instead of diluting the music, they always have something to add to the whole atmosphere.

“Premonitions” is deeply melancholic in it’s very essence, mainly in the riffs, keys, but also in the clear vocals, as for example in “The Deluge”. It also seems to be trying to haunt you during it’s acoustic elements , for example “Talas”. It contains a dramatic sound color in “The Apocalyptic Theater” but it is also wild, with fast and heavy riffs in “Fatal Frame”. All of this is constantly interchanging, of course, and it resides not just in these songs, thus putting the listener in a magical fairy tale and a medieval adventure that can make you get lost in time with its sounds.

“Premonitions” will move you, will make you “sad” and will leave those who are looking for more atmospheric sounds excited, but also those who are looking for Black Metal elements alike. Somewhat more mainstream than the band’s previous efforts, it will take you on a fantastic journey full of twists and turns, and until you know if good or bad has prevailed, the album will end with you trying to listen to it again, in order to understand what’s going on! When you do, you will also discover what lies further and deeper in its dark paths…

Legion Of The Damned – Slaves Of The Shadow Realm