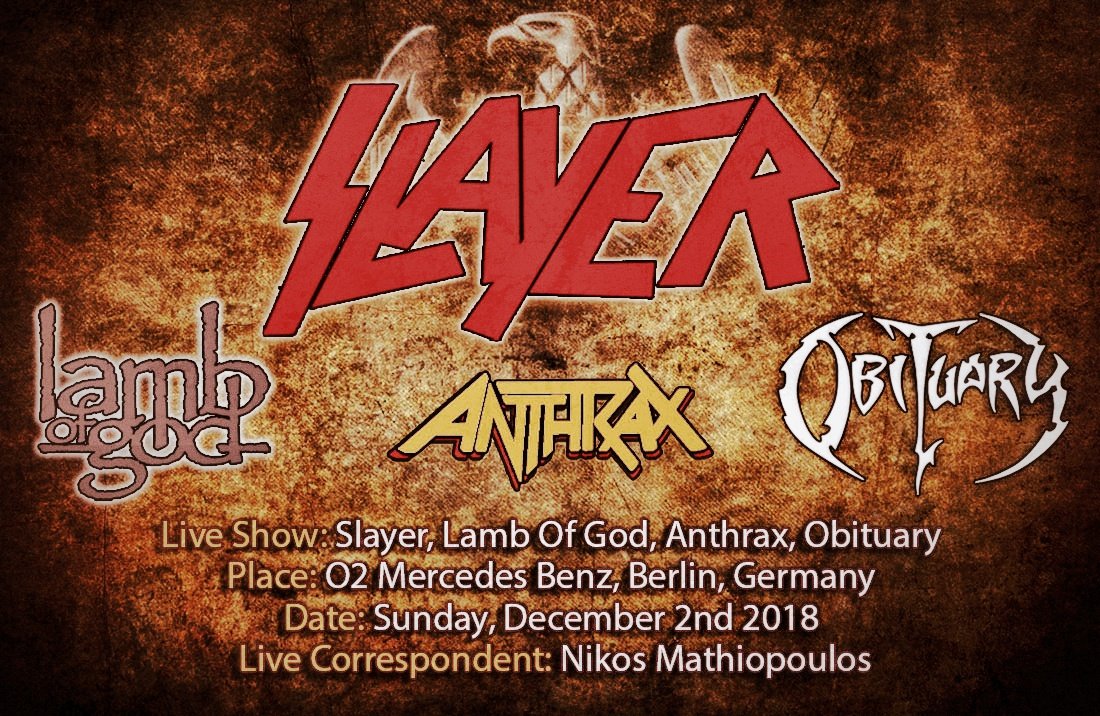 After a week of tourism at the beautiful Amsterdam and having wandered all over the Dutch Capital, my holidays were coming towards their glorious end, so I took my flight to Berlin to attend the long expected SLAYER’s live on their final tour! I still can’t believe they’re doing a farewell tour. Who? The mighty SLAYER! And if this isn’t enough, when the event takes place in a city famous for its fun, nightlife and history like Berlin and the rest of your travelmates have already booked their tickets you just cannot say no and stay out of it! You just embrace the idea and make a truly rewarding gift to yourself and follow them!

After trying to recover from the MANTAR live the previous night, we gathered our pieces and started heading to the O2 Mercedes Benz for the historic farewell gig of the year. Very easy access to the place, a real gem for the city, impressive design, impeccable organization, no hassle at all, but disappointingly expensive products at the food and drink areas.

Having already bought the necessary supplies (=beer), we started living the dream from the higher stands of the arena, observing everything and embracing every moment. There should have been around 20,000 maniacs from what I heard. The time now is 17:50 and OBITUARY hit the stage as the opening act, beating us with their heavy death metal we love all these years, although there was a serious sound problem on a whole track with the P.A. speakers not working, which was restored almost immediately!
Nevertheless, we saw a nice show from a big band that played  hit songs for 50 minutes with great sound in general, terrific lights and growls from the abyss, those only John Tardy can do. Highlight, the unprecedented “Slowly We Rot”, which he performed furiously.

Time for a small break to get another beer and it was time to see ANTHRAX ! I was very happy to see them again for the second time (I had seen them before at the Big 4 and I cannot say I was satisfied). This time they were amazing, they had an incredible sound, especially the guitar was a blast! In addition, they are living a second youth that could be seen clearly on stage as they were effortlessly moving around causing massive moshpit to the now warmed up audience! Scott Ian and co. performed their kind of thrash metal with a great deal of appetite. Belladona was classically jumping around and the rest were headbanging like there is no tomorrow. Highlight of their 50-minute set, the classic “Indians” in a bigger run and the addition of the “Cowboys From Hell” riff of PANTERA for an epilogue. A great thrash metal experience all in all.

Another half-hour break for a cigarette and again ready for a smash! I have to confess that LAMB OF GOD, although I appreciate them very much as a band, I have not followed them (unfortunately) from their start, but the only sure thing is that they are doing some awesome live shows! They were very loud, the sound was flawless, as bulky as they were, they played rudely, and their lights created a very “industrial-ish” atmosphere. I do not know for sure, but the whole visuals reminded me of the cover of “Demanufacture” album of Fear Factory! In a few words they kicked some serious asses! They are a very strong band playing a successful combination of SLAYER and PANTERA sound. They are the best in this style of extreme music.
RE-SPECT!

We are now on the final break of our concert night and we are full of anxiety, the pulses and the adrenaline is rising, the agony is at a peak and the intro has now entered (a very awesome introduction) which puts us right away in the atmosphere as we wait for the beginning of the live no matter what! First march with the up tempo “Repentless” of the same titled latest album and everyone was starting going nuts in there! On the backdrop was the cover of the album, a sign that indicated from the very beginning, that the show was going to be a huge production, and that’s what really happened, everything was unprecedented. The bright light, the huge fires and flames, the whole experience was over the top. We are talking about a totally devilish set up!
Of course, the setlist was amazing, especially from the point of  “Black Magic” (which was played P E R F E C T L Y!) and on, for me personally (and a for lot of other people), the live skyrocketed  to another level until the end with classic tunes  such as: “Black Magic”, “War Ensemble”, “Hell Awaits” with the introduction of the terrific effects of fire that you’d say Satan himself will come out to get you! Last but not least, all the all-time classics one by another, with endless headbanging and extraordinary atmosphere at all levels, culminating in the proverbial “Angel of Death” with the awesome well-known backdrop of the Heineken-Hanneman logo which literally became a total blast!

An ecstatic event, even though we were at the front and the sound in the first four tracks had a few problems and they made big breaks between the pieces of their set, it was a fantastic experience that could not have been missed. Tom Araya standing closer this time to greet SLAYER fans by giving them countless respects and Kerry King walking through his characteristic heavy step and with the grace of a thrash god to throw guitar picks to the ordinary mortals below are two images that will forever stay engraved in my mind reminding me of their legendary status.