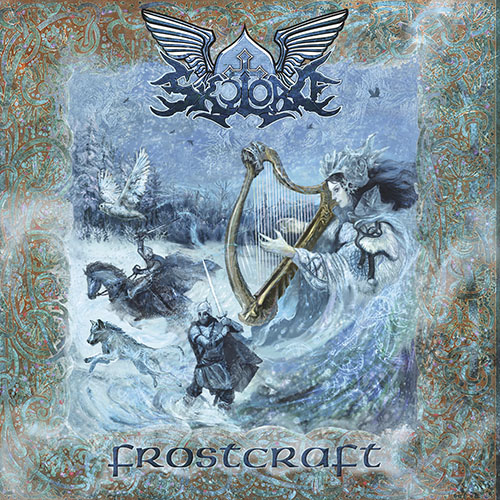 SKYLORD are coming from the icy Moscow, Russia. The band was formed in 2007 and this year, after 12 years of existence, they released their debut album, called “Frostcraft”. In addition to the album, 2 months later, they have released one of the album’s tracks as a digital single, with the lyrics in Russian. Let’s see what we have here…

The albums consists of 10 tracks (the first one is the instrumental album’s intro) and the last 4 tracks are a group of songs, or a tetralogy if I can name it as such, entitled “The Symphony of Seasons”, with each track having a season as a subject. Not so original? Yes. Beautiful and with integrity? Also yes. I will not keep you long, so you can go and enjoy the album. I will keep it simple. Here we have a debut highly influenced by the Finnish Folk/Pagan metal scene (ENSIFERUM, FINNTROLL etc) as well as the scene in which CHILDREN OF BODOM and ETERNAL TEARS OF SORROW are into. Well played, a nice production, nice transitions between clean and harsh vocals and keyboards that create a beautiful atmosphere together with the lead guitar melodies.

Let’s sum it up. Well done SKYLORD, I am waiting to listen from you again! At this point, I will dare to write something and I hope it will not be taken the wrong way. The fact that the band belongs to this scene music-wise (Folk/Pagan Black Metal), is a very good thing and I will explain why. This genre has a very specific structure which if played correctly it is a recipe for success. SKYLORD are good at it. Very good at it indeed. Well done once again.

Sodom – Out Of The Frontline Trench (EP)