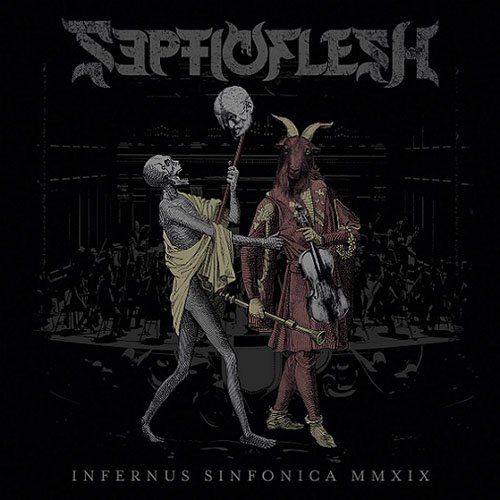 The domestic Metal scene has been mentioned many times. To be precise, it is a favorite subject of the Greek metal fans. Now, whether they actually support it, it is another matter entirely. But what happens when a group becomes so large that it eventually crosses not only the Greek borders but also the European and international ones?

We are talking about the great SEPTICFLESH of course. A priceless Greek band that succeeded in overcoming the musical tastes of the average Greek who is limited to some light-folk kind of music, but also the Greek metal fans, who are stuck with the -so called- “big bands” and refuse to accept anything beyond them. They managed with their music to cross the Atlantic to the country of Mexico and deliver a unique spectacle, corresponding to the aforementioned giants, showing that hard work, experimentation, originality and good work ultimately bear fruit.

The shift of SEPTICFLESH to more symphonic Death Metal paths became clear in their discography from “Communion” onwards. This may have bothered some (mostly older) fans of the band. But if you look at it realistically, their inspiration is at its zenith. This turn came to take flesh and bones through the last, live work of this beloved and pioneering band.

So in Mexico and with the participation of about 100 musicians, choir and orchestra, our compatriots presented something really wonderful. With “Infernus Sinfonica MMXIX” you really don’t know where to start from … From the wonderful cover, a work of (who else?) Spyros “Seth” Antoniou? From the setlist, which lacks their older tracks but remains complete (at least according to the band’s current data)? From the audience that really are delirious in front of the Greek leaders of symphonic Death Metal? From the awesome performance of SEPTICFLESH themselves who really dedicated themselves to the fullest to stage an absolutely enjoyable experience or from the other musicians who give flesh and blood to the band’s vision?

However you may see it, it is something unique, something special that exceeds not only the Greek standards but also the standards of many -supposedly- bigger names. When the DVD ends, you feel a jealousy that you couldn’t see all this up close and at the same time a terrible desire to achieve it at some point. I wish our (yes, I keep repeating it, it’s because of the pride I feel for this band) SEPTICFLESH, to repeat it somewhere we can all enjoy it as much as the Mexican friends of the “Infernus Sinfonica MMXIX” audience.