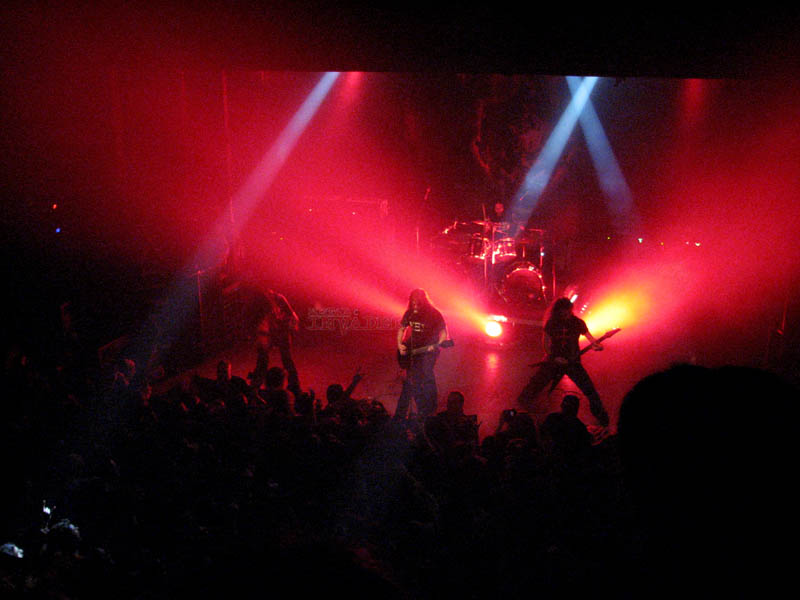 This day will be forever carved in the monument of domestic metal and will be remembered by the Greek metal fans, who will have something to tell the new born metalheads of the next generations… And that will be the legendary performance of the best Greek metal band on that particular, blessed rainy night. It is not only that all of us have something personal to say about the guys since they walk the same streets with us and we feel familiar with them. Rotting Christ is an established band worldwide through its 20-year career and this anniversary was the reason to make this special show for their fans of their hometown. The announcement that it would be recorded for an upcoming dvd made things only warmer, because you know how Greeks are when they are being recorded by cameras…

At the time the show started with 20 minutes delay, the venue was almost packed with more than 800 people for sure. After a small intro the members of the band entered the stage one by one and when Sakis took his place behind the microphone all hell broke loose…. Rotting Christ were furious, unstoppable and tireless. They delivered their songs one after another in perfect coordination something that was probably an outcome of the many hours of rehearsing especially for this show. The flow of the songs was superb as the band chose to go gradually back in time starting with few new songs and turning to the “Triarchy…” album, then taking a huge dive into its first releases to return again to “Dead Poem”, “Sleep Of The Angels” and “Khronos” finishing with a cover of Thou Art Blind and their most famous song (“Non Serviam”). It was an ultimate experience for the fans of the band since we listened to forgotten songs like “The Coronation Of The Serpent” or “Saturn Unlock Avey’s Son” with an excellent sound that was blasting our ears, especially after the 4th-5th song when the necessary balance was found among the instruments and especially the two guitars. I have no words to describe what happened when songs from “Non Serviam” and “Thy Mighty Contract” were performed. Those albums should be re-recorded and only then we will understand in all its extent the importance of their content in the history of melodic black metal.

Rotting Christ played on 10, they didn’t compromise with anything as they wanted to give their best and honour their “Brothers and sisters” as they called us for our support through all these years. Trust me, they surely did! The band sweated its ass off, didn’t stop moving and enjoying every second of it taking the performance into a higher level. Especially Sakis, with his new goat – beard trademark, was acting like a savage jumping up and down with his guitar and urging the people to shout more. You could actually listen to his yelling in between the songs even without the microphone. Of course the crowd responded immediately to the great mood the band was in and the reactions were equivalent of what was going on on stage. Just take a look at the setlist (I did my best taking down notes) and wonder what the hell could have happened that night.

The show lasted 2 hours and 20 minutes which is way over of a normal person’s strength especially if he likes to be in the first rows. At one point headbanging was pointless because there was no neck left to support the whole procedure! I bet there is not one single person that left the venue without a smile of satisfaction from what he experienced that night. People came from all over Greece, even though Rotting Christ will give more shows in the next weeks in other cities, not to mention those who travelled from abroad just to see their favourite band. Yes, there are foreign people who have a Greek band as their favourite and it’s time to realise that at this level that only Rotting Christ and really few more Greek bands have reached, where you come from has no importance.

Astonished and ablazed were we by this excellent on all aspects live show that will be remembered for its uniqueness. We are all waiting to see how the dvd will be and if it will be able to capture the excitement and the passion. All the best to the brothers of Rotting Christ, thy mighty contract is still on…