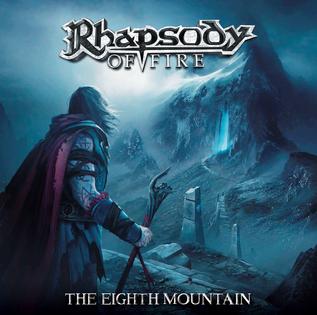 “The Eighth Mountain” is the twelfth album of the Italian symphonic Power Metal band RHAPSODY OF FIRE.

The album is the first chapter of a new epic story, inspiration of the keyboardist and leader of the band Alex Staropoli, who wrote it together with Roby De Micheli, under the name “The Nephilim’s Empire Saga”.

At the same time, it is also the first studio album of the band without its singer Fabio Lione and it’s since 1998 drummer Alex Holzwarth, who were replaced by Giacomo Voli and Manu Lotter respectively.

The single that preceded the release of the album is “Rain of Fury” on Jan. 11, 2019 and unfortunately it was already giving some early examples of what would follow.

In spite of the new episode, which starts in this new album and the collection with earlier songs of the band that preceded it, re-performed with its new singer, so that the band’s fans would slowly enter its new era. “The Eighth Mountain” continues synthetically in the way of production and presentation of the new tracks from where “Into the Legend” of 2016 left us.

An album with rather lukewarm compositions and with great absoluteness, Hollywood Metal wanted to be called by former guitarist Luca Turilli, and the many and imposing symphonic parts, a trademark of RHAPSODY OF FIRE and definitely one of the reasons that stood out and conquered a great place in the heart of their fans.

The album may be saved by two truly epic and its longer-lasting tracks, “March Against the Tyrant” and “Tales of a Hero’s Fate,” as well as the fastest “Master of Peace” reminiscent of the glorious past of the band.

A touching and definite moment to be mentioned, the voice of Sir Christopher Lee as a narrator in “Tales of a Hero’s Fate.”

So here we have a modest job that does not respond to the name of RHAPSODY OF FIRE. I’m waiting for their next job, hoping to see them finding their footsteps again and tell us once more about “Legendary Tales”, despite their absurd absences…