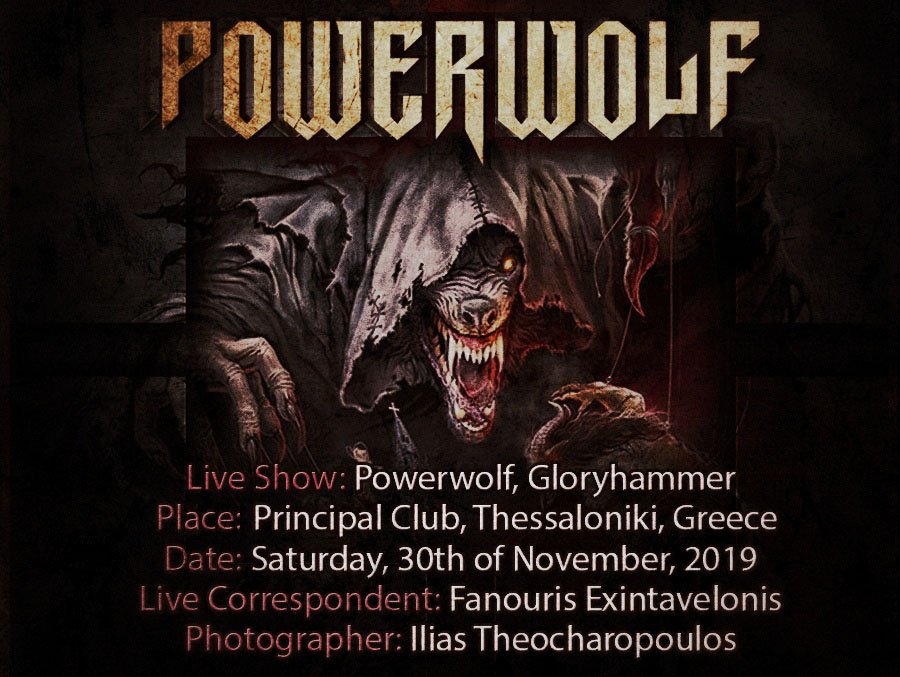 There are times that, no matter how experienced you are at concerts, you can still be pleasantly surprised, even from bands that do not match with “your sound”.  Well, one of those times, was the first appearance of the German group POWERWOLF in our country, on Saturday 30th of November in Thessaloniki, with special guests the British-Swiss band GLORYHAMMER, who had ALESTORM’s vocalist Christopher Bowes on keyboards.

The meeting point of Thessaloniki’s metalheads was in Principal Club Theater, with GLORYHAMMER starting their appearance according strictly to the plan at 20:30. It was also the first time for them in Greece. The   British-Swiss Power Metallers provided us a one hour program (more than the usual support’s band duration) and I can say that they gave the trigger of what was going to follow during the rest of the night…

Starting up with a rather quiet audience towards them, while many people were still entering the Club, GLORYHAMMER (after they welcomed us with Tom Jones’s “Delilah” on the speakers  and their intro “Into the Terrorvortex of Kor-Virliath”) came on “hard” on us with “The Siege of Dunkeld (In Hoots We Trust)”, which was the first song of their latest album “Legends from Beyond the Galactic Terrorvortex”. Classic Power Metal rhythms, with Epic and Symphonic parts, worm the people very fast, so that the crowd started following their admittedly very nice rhythm.

Their vocalist, Thomas Winkler, carrying around an ultrasonic Mjölnir, dressed in an armor similarly with all the other band members who were in their own costumes, put the crowd into the beat, presenting a very nice concert band, having a great communication with the crowd who didn’t need more to give back the vibes that were taken from the stage. After hunting a goblin on stage and playing some of their most well known songs like “Gloryhammer”, “The Land of Unicorns” and “Hootsforce”, their time was up .“The Unicorn Invasion of Dundee” was the last goodbye, leaving us with nice feelings and a very pleased atmosphere, ready for the main menu ….

The Germans POWERWOLF is a very special case of a band. Starting from their appearance and the corpse-paint that they wear, even though they are in the Heavy/Power sound spectrum, with the theatrical point, the costumes they are changing from one album to the next (seven in total), but also the stage sets they use, are giving a really big production. Even when they play in smaller clubs, they try to   maintain this big production, by just adapting it to the needs of the place.

Having a huge banner with their monogram, hiding the stage behind it, the time was now 22:00 and Ozzy Osbourne’s “Mr Crowley” has sounded from the speakers! The Germans, also dedicated to the plan, came on stage opening their program with “Fire and Forgive” while the crowd responded in the appropriate way for a great band, a way that is very pleasant for someone to see. Coming next “Army of the Night” and Incense & Iron”, POWERWOLF prove why they are one of the most enjoyable bands to see in a live show.

We enjoyed an amazing show (considering the size of the stage), consisting of alternator banners behind (in the main setlist and the encore too), with fire on stage (as much as the venue could handle), beautiful lights, robotics and many decorative, from the keyboard  and drum set stand till many stage points, referring to the favorite band theme, wolf men, vampires and the afterlife  that surrounds them.

However, “stage show”, isn’t not only the background graphics! It is the band itself and POWERWOLF were really good at this part too. Beyond the executive excellence of their songs, their vocalist Karsten “Attila Dorn” Brill is a real frontman (besides his great voice), revolting the crowd and “playing” with it. Near close, as a second frontman, the keyboard player Christian “Falk Maria Schlegel” Jost, with a big participation in the communication with the audience. With «Demons Are a Girl’s Best Friend», « Armata Strigoi», « Kiss of the Cobra King» and « We Drink Your Blood» coming up next, causing a real havoc, they close the first part of the concert with “Lupus Dei”, just to have an encore following with three songs, closing a full appearance that lasted almost two hours.

In conclusion, the first appearance of POWERWOLF at the Greek fans left them satisfied for sure! This indicates that after the end of the concert and with all the lights on, fans and members of the band stayed there, continuing to communicate in the thing that POWERWOLF themselves call Heavy Metal Mass! The ones of you who weren’t sure for the outcome and didn’t go to the concert, the next time that POWERWOLF will visit our country, be sure to honor them with your presence! They will compensate you!