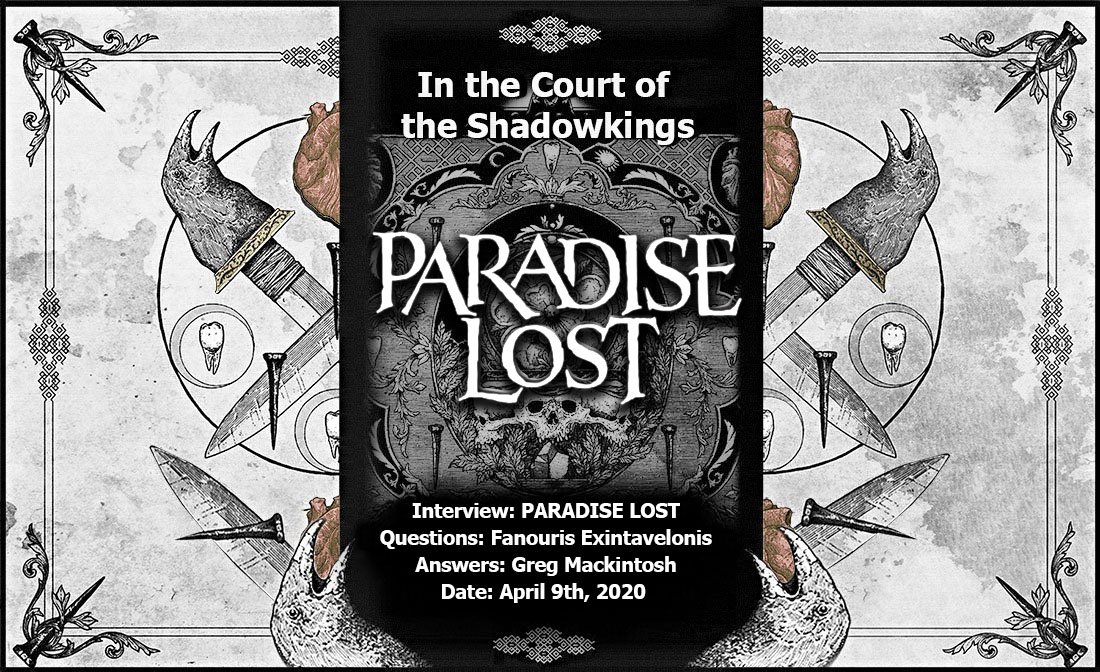 PARADISE LOST: a favorite band for the Greek audience! After their last visit to our country, promoting their very successful latest album “Medusa” and in anticipation of their new release entitled “Obsidian” which will be released on May 15th, let’s see what the main composer and lead guitarist of the group, Greg Mackintosh, has to tell us about the band!

Metal Hails from Greece! First of all, I would like to declare myself as a diehard fan of the band! PARADISE LOST have been together for three decades now! Accomplishing a great deal as a band, trying different styles along the way, how has this musical journey been up to now? Have you fulfilled everything you were aiming for?

Greg Mackintosh: The majority of our career has been great fun. Obviously as with anything in life it wasn’t without its ups and downs. We never aimed for anything or had any specific goals. We’ve just always rolled with the flow and judged ourselves on whatever our latest output was. I think the best way to look at success in any walk of life is be content for as much time as possible in any given day. In that respect, after all is said and done I think we have succeeded up until today.

“Obsidian”, your new album, is the 16th in your career.  How would you describe the new album? Where was it recorded? What is the theme and musical style of the album? You seem to get your inspiration from a wide variety of influences.

Greg Mackintosh: I’d say the new album is far more varied than the previous couple of albums. There are quite a lot of differing styles going on. There is no theme as such but I think musically and lyrically this record is quite refined, thoughtful and introspective. We do have many influences and on some records we will decide to use more or less depending on our mood.

What was the overall reaction to your latest album “Medusa”? Was it the one that you were expecting?

Greg Mackintosh: It was great – it was actually way better than I was expecting. We set out to make a fairly bare bones doom metal record with caveman drums and quite fuzzed out guitar and bass. It was definitely our heaviest album in terms of metal. As with every album we do, it can go either way with the response. “Medusa” was in many year-end lists which is good enough for me, but when we toured we realized that it was a very well received album.

Talking about your latest records, there has been a lot of talk concerning the return to the “Doom Metal” roots. At the same time, many things were said about the “nihilism” and “darkness” in the lyrics. Is the one thing totally matched with the other? Does “writing the bleakest of lyrical content” mean that the music has to be super dark to match?

Greg Mackintosh: It’s actually the other way around. The lyrical content comes after and usually reflects the tone of the record. For instance, with “Medusa” the album is fairly unrelentingly dark and heavy and the lyrics reflect that, but on “Obsidian” there is far more light and shade. It’s more subtle, so the lyrics are the same. They are more inward looking and less nihilistic.

Does the fact that, nowadays, musicians are not spending a lot of time in the studio (tweaking and polishing an album), means that the final product is less refined? Usually, what is the average time you stay in a studio while you record?

Greg Mackintosh: That depends. “Medusa” was very quick because of the type of record we wanted it to be. With “Obsidian”, the drums were quick but all the other stuff took longer because we wanted a much more textured album. There isn’t really an average time. In the nineties, it was months in huge studios but a lot of the time was spent partying. These days, it’s far more focused and I tend to get sounds pretty close in the demo stages which also cuts down on the time needed.

Tell us some things about the “studio concept”. How do you choose the studio you plan to record? What about “setting it up” and how does this environment influence you during the creative process?

Greg Mackintosh: We like studios that are very remote. To some degree, this helps us focus but also I think the surrounding bleakness and beauty can “leak” into the recording. For the last couple of records, we have spent more time setting up gear and sounds than we have recording because we want to capture the right sound.

The band started to shift styles around 1992’s “Shades of God” album. Afterwards, in “Draconian Times” in 1995 we had perhaps your biggest shift in styles. Moreover, you used clearer vocals on 1997’s “One Second”.  Tell us some things about this progression and changes of musical direction through the years. What was the main reason for that? Which were your main influences until the late 90’s? Did you listen to other kinds of music back in those days?

Greg Mackintosh: Any change in style within the band has come about because that is what kept us interested and made us feel fulfilled at the time. With “Shades of God”, it was to slowly introduce more melody to the vocals and experiment with musical styles within metal. After “Draconian Times”, it was to break down the traditional metal dynamic and experiment with songwriting and sounds. In the late nineties, there were a lot of different things going on – goth, electronic, classical, rock. I think it worked for the most part on “Host”, but I think we lost a bit of direction on a few tracks on “Believe In Nothing”.

Talking about the past, albums like “Host” and “Believe In Nothing” (released in 1999 and 2001, respectively) were the most “controversial” ones, according to your old school fans. How do you feel about those albums nowadays? Would you change anything at them, if you could turn back time?

Greg Mackintosh: I don’t regret a single thing. Hindsight is kind of pointless because of course certain things could have been done slightly better or in a different way, but that wouldn’t have led us to the path we’re on today. We are very proud of “Host”. In a lot of ways it’s a very classic LP – it’s just not a metal album. “Believe In Nothing” is different. The whole thing was compromised. Problems within the band, lack of musical direction, label problems, recording problems, drugs, depression etc. I’m amazed listening back that there are some really good songs on there because I can’t really recall making that record.

There once was a rumor that you (as a band) had renounced your first album “Lost Paradise”. Is this true or false? How do you feel about that album nowadays?

Greg Mackintosh: No, we never renounced it. We just preferred the sound of our “Frozen Illusion” demo to the sound of “Lost Paradise”. We just thought the atmosphere and rawness was lost. We were a little angry with Hammy, who ran Peaceville, for the sound, which is why we did the 12”, to try to get a sound closer to what we wanted. It did its job as a first album though. You have to start somewhere.

How do you view your own musical legacy? Is it something that you go back and revisit those old albums or do you prefer to focus on what is ahead?

Greg Mackintosh: Yes, I sometimes listen to the odd track from earlier in our career and sometimes I’m pleasantly surprised. However, we have never dwelled on the past and my biggest fear is becoming a legacy act. If I felt that our newer material was becoming less relevant then that’s the time to stop.

On the occasion that many bands officially complete their cycle, the question is one: Does “Creativity” and “art” have a ceiling?

Greg Mackintosh: No. I think for me it’s a constant learning curve. It’s also very subjective, so one man’s masterpiece might be total shit to someone else. I think as long as you can remain excited about others art, it gives you hope for your own.

Your live shows are not so “fancy”, they are just simple and majestic! Are you fond of grand, theatrical live performances with guests on stage, etc? Have you ever thought of any PARADISE LOST’s concept live with effects, fires and stuff like that?

Greg Mackintosh: I always found that stuff cheesy. Even the guitarists swapping sides and going back to back thing is a step over the cheese line for me. A decent light show and atmosphere is all I look for in a band when I see them. Everything else is just icing on the cake.

Closing this interview, can you send a message to your Greek fans and, of course, to all PARADISE LOST’s fans worldwide?

Greg Mackintosh: We hope everyone is doing as well as can be with all this madness going on and let’s hope we come out of the other side soon. In the meantime, we hope that our new record will give a little respite.