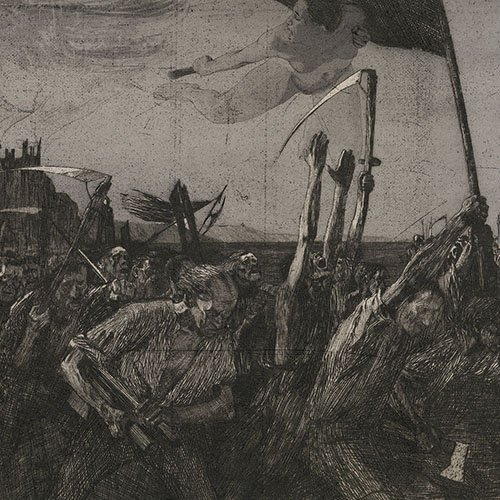 Second part of a four-part quest called “The Suns Of Perdition”. The first; War, Horrid War, which for many was one of the best metal albums of last year. An effort that lyrically makes the jump from war into philosophy. An effort that tries to establish Canadians even stronger among the top of the genre (and it very well succeeds into it).

What is the price of primordial knowledge? The price of spreading knowledge was, is and will be great, unbearable, heavy. The Canadians, after stealing a little spark of fire from the wheel of the Sun, directly from the furnace of Hephaestus, instead of giving it to humans, they use it for other, darker purposes. They exchange their souls for eternal, endless wisdom. Hence the dualism of Art, but also of the hedonistic riffs. With war rifles in the background, having prepared their mustaches, they are ready to fight any kind of censorship, like a John Milton of their time. Comparing the soul of a man with a bird, they praise the mother who protects her little one.

A Primordial Fear is born, an old and familiar Awe, what makes man (unsuccessfully?) fight the almanac archetypal serpent. Belief in God is something subjective. Does God exist or not? The profit and loss in any case are great. But if he does not exist, then what have we really lost?

Canadian Black Metallers aim to answer these questions thematically (but also musically). They move from war to Philosophy (after all, these two coexist just fine). As if you constantly feel a plague hovering over the darkened Middle Ages, which are upon you and terror is everywhere, fear is spreading quickly. Opening with a terrific and awesome guest appearance by Maria Arkhipova of ARKONA, who also wrote the corresponding lyrics in the opening “Promethean Fire, the darkness, the occult, the attack on all fronts, the savagery, the approach to Death Metal, are all here. Only that everything has risen to higher levels and reaches the innermost parts of our soul. The voice travels you back, to darker times, to more primitive societies. The guitars make you feel like you are looking at a black, dark forest which is ready to devour you. You can feel the bass roaring, which is a little bit rare in the Black Metal idiom.

Too technical, in your face and aggressive to only be Black Metal. Too primitive to be modern. Too modern to be completely old. Extremely positively monotonous to be boring. Such an unbelievable thing to be even best of such a successful endeavor. Definitely one of the top 5 albums of the year.

In Flames – Reroute To Remain