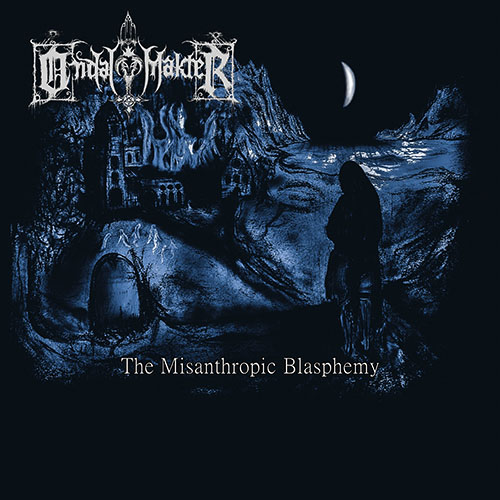 At the end of 2020 on the 24th of December the trio act ONDA MAKTER (“Evil Powers” in English) released their latest full-length album “The Misanthropic Blasphemy”. Formed in 2013 and starting as a duo, the blacksters from Sweden having released already two EPs and one full length in their native language (“Mardrömmars värsta mänsklighet” in 2018), attempt this time to communicate their message in English and isn’t it a misanthropic one…

Archon von Fjord on the guitars and vocals and Malphas on drums are old acquaintances from the very interesting Swedish band ESCAPIST participating there as Anton Holgersson and Johan Mathisson respectively. But make no mistake, with the addition of Furcas on bass guitar “The Misanthropic Blasphemy” is an album delivering furious black metal and the band as ONDA MAKTER differentiate themselves drastically from their mostly mid-tempo relatives, ESCAPIST.

Although the band in an interview discussed their inspiration from bands such as IMMORTAL, AUSTERE, GORGOROTH and MORK GRYNING (blackmetaldaily.wordpress.com, July 16 2018), I have to say that aside from the blast beats and the tremolo riffing the very interesting thing that caught my attention was the thrashy early- SODOM-like influences extremely prominent during the brakes and slower passages and also the melodic diatonic approach to the composition which is preferred to that of the chromatic, more dissonant approach, leaving a DISSECTION aroma lingering at the end of every listening.

During the eight, rather long for the genre, tracks which form the album there is a wide variety of sound textures and colors. The tempo and orchestration changes keep the listener’s interest always at a peak and make long tracks such as “Burn their Souls” for example seem like three-minute singles. The atmospheric element is also present either through interesting and theatrical intros such as that of “Curse me Father” and “Heathen Hatred” or clean dreamlike passages such as the middle part of “Burn their Souls”. The instrumental “Song of the Mourning” adds as a fine surprise in the album’s flow connecting its two longest tracks (“Curse me Father” and “Heathen Hatred”) rather successfully and as the album spins its closing all-guns-blazing title track it feels like a journey reaching its destination.

The way Archon von Fjord articulates and delivers his lines is uniquely sentimental and passionate. I’ve already talked about my impression that there’s something of early German thrash in the recipe of this album and I think that it has to do also with Fjord’s singing. After my first listen I’ve felt the inner urge to give Sodom’s “Tapping the Vein” a spin and there it was “like father-like son” the influence of Tom Angelripper. Beautiful and dramatic interpretations (listen to the outro of “Keepers of the Black Flame”), raw and energetic performance, the singing is one of my favorite elements of the album.

The production succeeds to connect cold guitars and warm sounding drums using distorted bass as a glue. The sound flows like an unstoppable impetuous mountain stream river leading the melting snow towards the sea, it swirls and whirls and lures the listener to follow its course. Another great album taking off as an independent release reminds us the fact that the majority of the most interesting extreme metal releases in 2020 didn’t came from the “big stars” of the genre and their big international labels. Perhaps we’re living the long-awaited era of the resurrection of the underground or even that of a new emerging wave of black metal. We shall see… until then let’s sit back and enjoy “The Misanthropic Blasphemy”.

Hatriot – From Days Unto Darkness