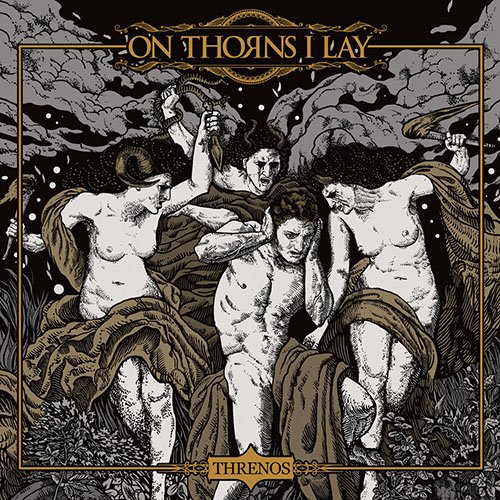 I don’t think there has to be an introduction for this band, but here’s a mini bio. Formed in 1992 as PARALYSIS, they changed their name in 1993 and became PHLEBOTOMY and finally in 1995, they became ON THORNS I LAY and remain so to this day. Since their early days, the band has been playing Doom/Death Metal, except for a period that turned it into more Gothic paths, but fortunately (to my ears) that period passed quickly. After 8 albums, they gave us their new one, entitled “Threnos”. I wrote an introduction after all as it seems, oh well. Let’s dive into the new album.

This album consists of 7 tracks. From the very beginning, we understand what is going to follow. Long, nightmarish songs, with heavy guitars, probably low tuned, brutal vocals coming out of the deepest part of the Abyss and drums which with every beat, they steal a bit of your sanity and mind. Here and there we can find some female vocals, enough to give the necessary feeling, which is mostly something miserable and black.  On top of that, we have the keyboards, mostly keeping a background, offering an atmosphere capable of driving you a little bit more down the road to misery. At this point, I must confess that I was particularly fond of the “fast” parts of this album and I will explain why I used the quotes in the word fast. In a Doom Metal band, when we talk about fast parts, you must not think about blast beats and ultrasonic speeds. It’s the speed that another band would use for a low or medium tempo. However, the parts where these “fast” ones are used, are points that have obviously been well thought out before being placed there.  Closing this text, I give credit (not that he needs it) to the beloved Dan Swanö, who did the mix and mastering for this album. Listening to the it, I was thinking that whoever did the production created a stonewall of sound, until I saw the name.

Reaching the end, although Doom Metal is not my super favourite genre , I listened to it many times and I liked it. The band’s loyal fans probably listened to it already. Those of you who are new to them, definitely give them a listen and check out their previous albums also. I can guarantee that you will find very nice things thoughout their discography.

Belzebubs – Pantheon Of The Nightside Gods