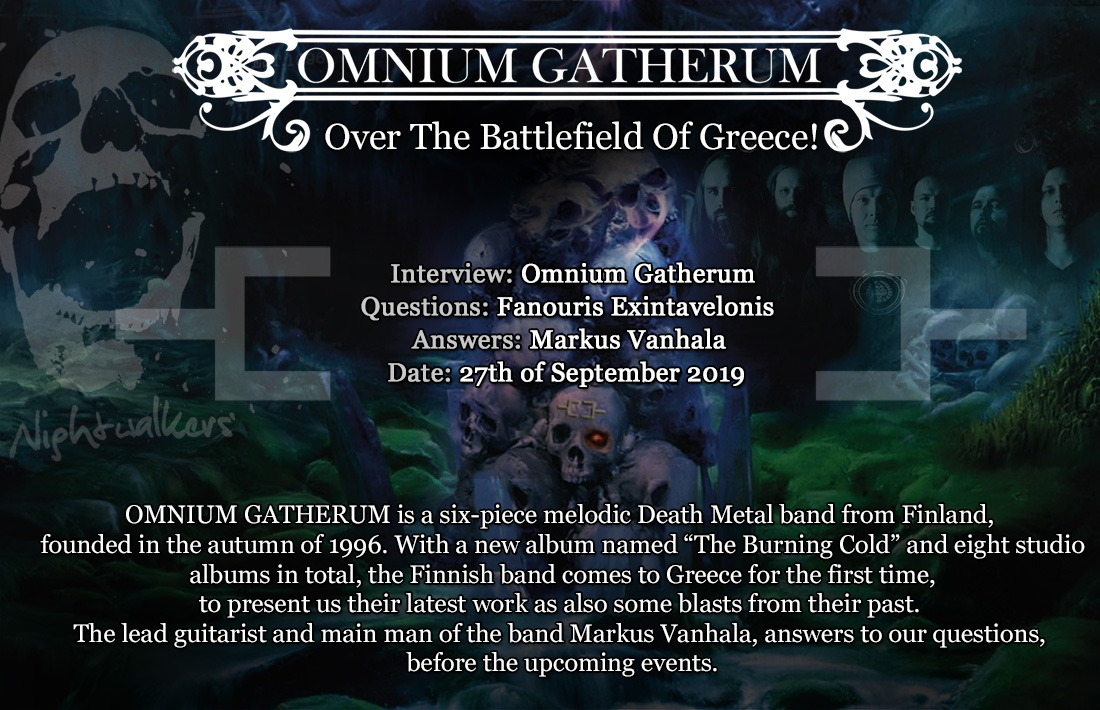 Almost one year ago you ’ve released your latest album and it was very well accepted from the audience. What is “The Burning Cold” for you?

Markus: It’s our 8th album and culmination of the hard work we’ve been doing past year(s). Still very satisfied with the album results after one year of it’s release, and the songs have been working perfectly also in concerts, you Greeks gonna see & hear it soon in few days. There’s also SKULLS in the album cover, so it must be coolest ever, right?

In you last two previous works (and generally in your discography), we see a mixture of soundscombined with your classic Melodic Death Metal style. Could those elements be characterized as “progressive”? What does that means for the definition of the band’s music and its musical choices?

Markus: OG’s share and vision have always been to think bit outside-the-box. Means we’ve always took influences out from the melodic death metal, and outside even metal field. Progressive rock, classic rock and AOR have been spicing a lot of our music especially in the later days so OG’s approach to metal is quite different than most of our colleagues. Sometimes we call our own musical genre Adult Oriented Death Metal, like AOR-death. Journey meets At The Gates infused metal, haha. Speaking of ”progressive” touch, I would say ”Beyond” album was maybe our most progressive touched album so far in my opinion. Previous two albums have maybe again returned to a bit to more easy and catchy approach arrangement wise…

What is the thematology of your new album? What do you want to “pass” to your listeners?

Markus: Conceptually, ”The Burning Cold” focuses on human emotion and human tragedy. Album does reach out to other subjects too but does so in a way that links the ideas through these concepts. The emotional condition is a fascinating subject because it holds so much importance in everyone’s life. It has the deep questions of our kind of existence. We have the intention and we have existence – that is all that is. ”The Burning Cold” isn’t looking for any answers with these themes, but rather admiring the whole of existence in all it’s glory. When we realize to stop looking and waiting, this mystery of life will glow in a new shine.

The cover artwork of “The Burning Cold” is kind of dark and evil! What is the meaning of it, with all those skeleton heads in the middle?

Markus: Skulls, they are metal, haha! In the cover, there is a skull altar or pile somewhere in abandoned cold freezing place, but there’s an embers fire glowing in one of the skeletons eye..  Me and our artwork artist Olli Lappalainen were listening some good ol’ real death metal albums, like Scream Bloody Gore by Death, Beneath The Remains by Sepultura, Clandestine by Entombed and Cause Of Death by Obituary. We’ve always loved those albums, and not only the music, also the cover artworks! All of them had skulls in the cover, so we were thinking what hell. OG need a skull cover album, haha! So, between the lines you can sense, it is same time a tribute to the old times death metal and their artworks.

“The Burning Cold” was released via Century Media records. Are you satisfied from your new label?

Markus: Yes, this album was basically our ”big label debut” so naturally the album have been released wider and it have been noticed more than ever, much thanks to the label of it of course. We also toured our first time in Australia and New Zealand after ”The Burning Cold”, and now Greece too. This shows that the band’s ”status” is growing and we ’re invading to new territories too and  I ’m happy about it. In the end, I ’m a metal tourist wanting to see the world.

What are your plans for the upcoming months? Any news about festivals, even new songs in the writing process already?

Markus: There’s still some touring to be done, even we ’re already been spreading ”The Burning Cold” tour and message all over Europe, North America, Asia and Australia already. Next in line is the second headliner tour in Europe, touring North America with Insomnium and Seven Spires and Scandinavia with Insomnium. Few double trouble gigs for me ahead, need to go jogging more before that, ha. I’ve been slowly starting to sharpen my composing pen and try to open the creativity juices to flow. Century Media already sent me a letter, old school letter which is cool, that they wanna release the next OG album too. So i better start to working hard to top the previous works!

You are visiting Greece for an upcoming show, in front of the Greek audience. What are your expectations? Ever been in Greece before?

Markus: Omnium Gatherum haven’t played yet ever in Greece, so naturally we ’re really much looking forward to play for all of you Greeks. Hopefully you’ll come in a large crowd to the gigs in Athens, and Thessaloniki! I personally have been only once before in mainland Greece, and that was last year when I was performing there with my other band Insomnium. The show was great and the audience loud and fantastic, so I expect no less than that also with OG! …In Thessaloniki harbour, I even saw some weird lil Chtulhu sea monster grabbed out from the sea by a fisherman, and it was making strange low noise.

OMNIUM GATHERUM is an “old” band in the genre, active since 1996. Would you like to tell us about your feelings when your music reaches people who, ultimately, like it?

Markus: Of course, always at the first place, music is a selfish calling and you have to please yourself honestly before you can please others – Otherwise you’re a poser and wimp! But then when it happens that people celebrate your music (and via that your soul), it’s magical. Makes all the ups and downs (and low downs) worth it, especially hearing the stories that ”our music helped thru the darkest days or helped surviving suicidal thoughts etc”. Been hearing these often, and it always rewards by low Finnish self esteem to hear my doings are worth something and appreciated. I was so happily surprised in New Zealand when I was completely exactly in another side of the planet earth, 17500 kilometers away from my home, that there really were a lot of people that knew our songs. That was strange to see our metallic message have gone that far. 🙂

Some of us had the luck to catch you live in this year’s BRUTAL ASSAULT Festival in Czech Republic, back in August. You were great! Did you enjoy the festival? Was it your first time there?

Markus: Thanks! Brutal Assault is a great festival, I think this was OG’s second or third time there and it’s always really good audience and feeling on that festival. The location also in the old fortress is pretty cool and exotic, fits damn well! …and Czech pilsner rules! 🙂

What can you recall from the times of your first EP “Steal The Light” back in 2003? “Wastrel” and “Son’s Thoughts” in my opinion, still remain as some of your best songs!

Markus: We were young and restless, didn’t had any clue about how anything in the business (or even in the studio) works and we were just driven by some inner instinct and gut feeling. Good innocent days with high hopes, with a lot of wild partying involved back in the day. We didn’t even have any money to hotel or anything so we slept on the studio floor. Whole ”Spirits And August Light” debut album was recorded in 4 days, because we had reaaaally slow budget. I think it sounds rough and wild and original still. As there wasn’t time for any polishing or production, just push ”record” and fly on, haha. We hadn’t played those old songs for ages, but for this upcoming tour we have even rehearsed some stuff from the first album, to play maybe one song. Gonna be nostalgic fun!

Which artists have influenced you through your whole career and with whom would you like to share the stage one day, if you could?

Markus: DEATH was the first death metal band I ever fell in love into, and still my number on in the genre. Iron Maiden overall the first loves and greatest band on earth! First spark into the melodic death metal must’ve been the Swedes Subterranean EP by In Flames, Edge Of Sanity albums and Gallery by Dark Tranquillity as also Finnish Amorphis and Sentenced. Maybe we’re old band enough already to get our ”inspiration” thru our own trademarks and sound, and we know how OG should sound, more than getting inspiration from 1 or 2 same bands thru the career. Always avoiding to be a copycat. Because of that some non-metal bands like Rush, Pink Floyd, Marillion, Toto and Journey for example have been big influence for me for years…

What do you consider to be your greatest musical achievement so far?

Finally, some words and thoughts for your Greek fans and the readers of THE GALLERY web magazine?

Markus: Let’s have a huge metal party and ouzo fiesta soon at your place as follows: