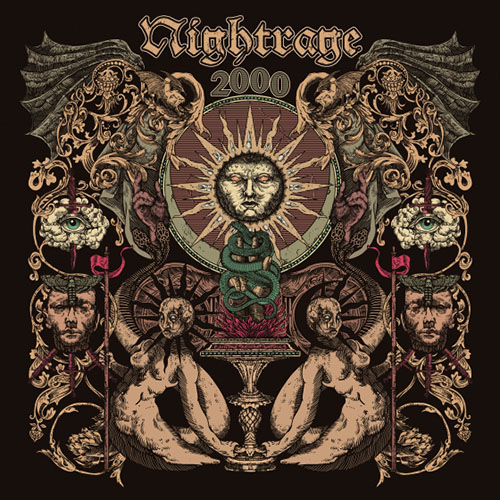 NIGHTRAGE decided to give their fans a great gift for their 20th anniversary, and this is nothing else but the first tracks they ever wrote as a band! “Demo 2000” consists of the first compositions of NIGHTRAGE, written by Marios Iliopoulos together with his friend Gus G in June 2000, following the dissolution of the legendary EXHUMATION.

This demo was the key to the career of NIGHTRAGE, as it opened the doors for them to record their first album and collaborate with the guru of the melodic Death Metal sound Fredrik Nordstrom.

So, here we will find the original form of most songs of the debut “Sweet Vengeance” as well as some tracks from the second album “Descent Into Chaos”. As expected for a demo, the compositions have a fairly raw and rough sound. It is very interesting to listen to these songs without Nordstrom’s production, as they sound much closer to what Iliopoulos did with his previous band than to the final result of the first NIGHTRAGE album. Of course, I am not saying this as a negative thing, but to emphasise simply the difference between these two releases.

Furthermore, this demo is a testament to the writing talent of Iliopoulos, as despite the participation of so many big names in the first two albums of NIGHTRAGE, they were not involved in the composition of the songs. Everything you hear, all the melodies, all the riffs, all the solos come directly from the soul of the band, Marios Iliopoulos.

Of course, there are some minor changes, such as the longer introduction of “Circle Of Pain” and “Poems” which was originally called “Poems Doomed To Oblivion” or how much more aggressive “Frozen” was in its original form as “Frozen Halflight Atmosphere”. “Poem” and “Frozen” weren’t the only songs that had their titles shortened – the original names of “Ethereal” and “Hero” from “Sweet Vengeance” were “Ethereal Veils and Shrouds” and “Hero In A World Of Demons”! Here, we will also get the tracks “Black Skies” and “Gallant Eds” which the band would release a few years later as bonus in the compilation “Vengeance Descending”. The drums in the demo are played by a drum machine programmed by Gus G, and I can’t hide the fact that he did a pretty good job.

To conclude, “Demo 2000” is a must get for all the fervent fans of NIGHTRAGE and a highly interesting historical release for all ubiquitous fans of the melodic Death Metal genre.