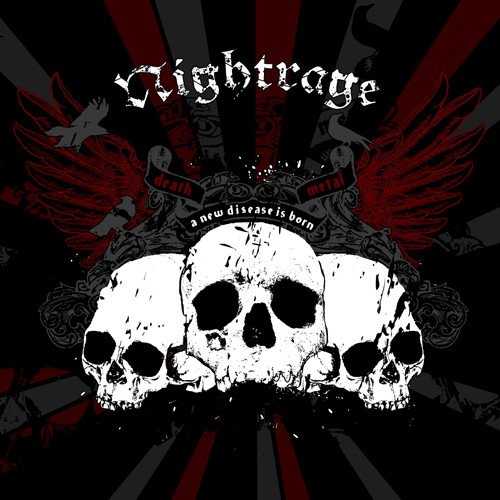 When someone leaves his country, his family, his friends in order to create his favorite kind of music, this surely indicates the love and devotion this man has for what he is doing…And that’s what you face in NIGHTRAGE! Marios Iliopoulos, leaving behind EXHUMATION together with Greece and moving in Sweden, has already succeeded in making a good reputation for him and his band in the musical genre he adores…New Wave Of Swedish Death Metal!

In the two previous discographic releases of NIGHTRAGE, names such as Tomas Lindberg (ex- AT THE GATES, DISFEAR, THE GREAT DECEIVER), Nicholas Barker (DIMMU BORGIR, CRADLE OF FILTH), Per Moller Jensen ( THE HAUNTED) and Gus G ( FIREWIND, DREAM EVIL) have collaborated with the band, fact that lend Marios so much experience that even the biggest names of the genre would envy! Now, “A New Disease Is Born” may not have the all-star crew that the previous albums had, however this leaves more space for Mario’s inexhaustible musical ideas, leading to the most mature release NIGHTRAGE ever created. The new line-up, consisting of the young but most talented vocalist Jimmie Strimell (just hear his alternations between death & clean-melodic vocals…), the recently acquired bone-crunching drummer Alex Svenningson together with guitarist and founder Marios Iliopoulos and bassist Henric Carlsson seems to be the most solid and functional the Greek/Swedish group ever had!

NIGHTRAGE’s third full-length album is served “hot” for fans of IN FLAMES, AT THE GATES, ARCH ENEMY, DARK TRANQUILLITY, old-SOILWORK and THE HAUNTED so you don’t have to wait for the menu-catalogue; just make your order instantly! Captivating riffs, memorable choruses, concise solos, aggressive drumming and pompous bass lines, great songwriting…all included on the menu! After the cooperation with Fredrik Nordstrom in the previous albums, the band chose to entrust Jacob Hansen (Mercenary, Fear My Thoughts, Heaven Shall Burn) for the production and this seems to be a bull’s-eye choice since the sound stands out very modern, strong and solid, pushing forward the overall result!

Songs like “Spiral” (perfect opener!), “Reconcile”, “A Condemned Club” (just stacks in your mind with its ideal chorus!!! Fucking great), “De-Fame” (great guitar ideas!), “Scathing” (no comments…just listen to this ideal Swedish death metal opus!!!), “Surge of Pity” (I’m out of comments here…!), “Drone” (great chorus!), “A New Disease Is Born” (the best closer-instrumental) will captivate your mind and stuck in your head from the first hearing, making you silently whisper their melodic lines when you are empty of thoughts …The band’s transfer from Century Media to Lifeforce Records seems to have given the fresh air and ideas for the completion of a great release …
This is how modern melodic death metal should be played in 2007!
Totally suggested!