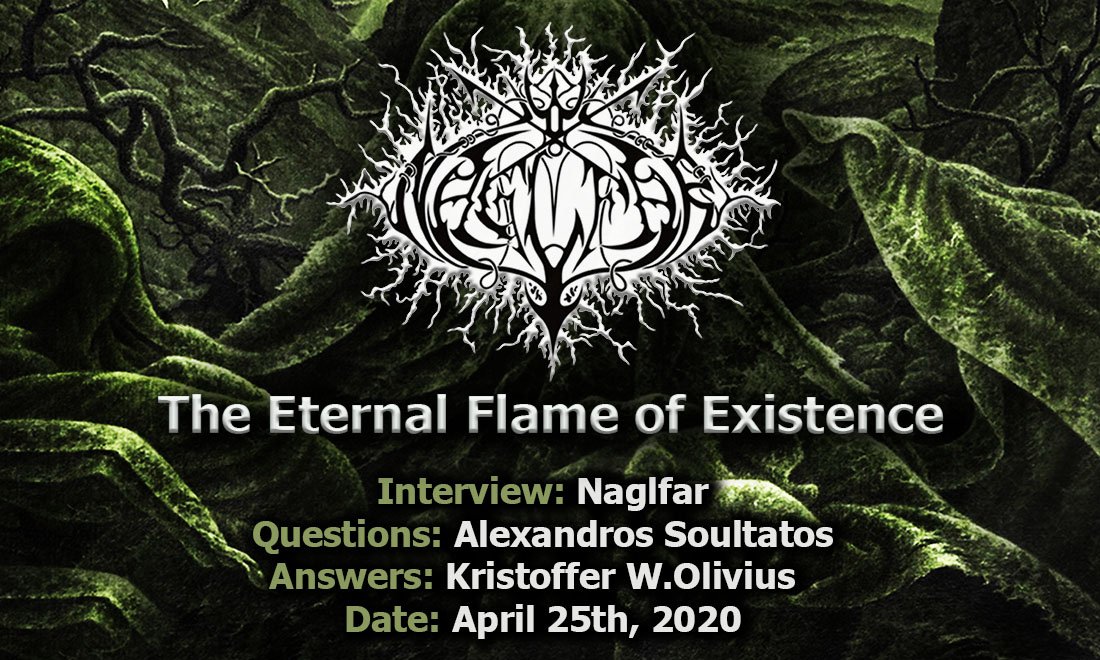 Sweden’s Black Metal veterans NAGLFAR are back, after 8 years of absence! As their 7th full length album “Cerecloth” is about to be released, it is the right time to speak with NAGLFAR’s vocalist Kristoffer W. Olivius, about this new achievement, the history and the future plans of NAGLFAR, as also to learn some interesting information about his other great band, BEWITCHED!

– Greetings from Greece and thank you for your time Kristoffer! “Cerecloth” is the new album of NAGLFAR, expected to be released at May 8th 2020. Tell us some information about this new work and the recording process…

Kristoffer: Hello! Firstly I’d like to say that we have been working for “Cerecloth” for more than 2 years and it was ready since last summer, however we decided to wait a little bit in order to deal more with the lyrical section and the concept of the album. This release follows the classical music paths of NAGLFAR, as it is the natural continuation of “Téras”. As an album, it might be a little more complex but it’s an honest one, for sure! “Cerecloth” was recorded and mixed by our guitarist Marcus Norman at Wolf’s Lair Studio, and it was mastered by Dan Swano at Unisound studios. I’m really satisfied and happy with the outcome, cause we have spent a lot of time on this! So far, people seem to really like the first samples given…

– What’s the message or story behind “Cerecloth”?

Kristoffer: The main lyricist on “Cerecloth” has been Andreas. I feel that both Andreas and I are very similar when it comes to the theme that we hold to, mostly talking about feelings, trying to explain different kind of emotions like hate, rage, sorrows, fears, anger and stuff like that. I would say that the lyrical part is a field that always goes into everything that we create, otherwise I feel that the songs stand by themselves. The cover of the album made by Kristian Wåhlin, is the first thing that introduces you into that concept….

– In your opinion, what are the differences or the similarities between “Cerecloth” and “Téras”? Are you satisfied with the outcome of the new album?

Kristoffer: Of course I’m satisfied with the outcome! As I said before, “Cerecloth” is the natural continuation of “Téras”. I would say that “Cerecloth” ranges within the same musical patterns with our previous album, but it’s more aggressive and intense, enriched with some more melodies. Dan Swanö has also done a really good work at the mastering part, giving us some “fresh ears” to complete the whole process.

– Your previous album “Téras” was released almost 8 years ago! Why did it take you so long to release a new record?

Kristoffer: First of all, during all that period of absence, my first child was born. This fact made me take a break and dedicate some more time to my family. Also, as a band, we didn’t feel that we had any reason to record a new album the first years after the release of “Téras”. Then, two and a half years ago, some people from Century Media approached us and threw the idea to make a new album, which would be released from their label. And so it happened! We had worked with that company at the past and we knew what to expect. So, as we already had various ideas, all three of us decided to go on…

– So, now you keep on being a three-membered band?

Kristoffer: Yes, Marcus, Andreas and myself, we are the core of NAGLFAR, being responsible for the songwriting and the production. We are a long time together and we have a common way of thinking, concerning the music of NAGLFAR. So we prefer not to have any kind of musical interference coming from “outside”. However, some other musicians have joined the band for the live appearances and the recordings, they are complete members of NAGLFAR, but they aren’t the core and they understand that.

– In which way do you think that NAGLFAR have changed over the years? Is there the same enthusiasm as when you started this adventure, back in ‘92? Or just a different kind of it?

Kristoffer: We were really young when we formed NAGLFAR, around 15-16 years old, still going to school all together. We had a lot of free time so we trained and rehearsed countless evenings. Many bands came out at the same period and everybody knew each other. We were doing things without knowing what the outcome would be. Pure moments of an era in which the extreme metal genre was spread. As the years passed, we became more mature and progressed as a band. Nowadays we are less spontaneous but the flame still burns inside, for me and also for the other guys in NAGLFAR. We had so many years to release our music, so we are excited to see what will be the acceptance from our fans!

– Since I am a fan of NAGLFAR from the beginning of your “official” career and your debut album. During those years, I realize that album after album, you leave behind the melodies and concentrate more at the “dark” and “extreme” elements in your music. Is this happening on purpose or it’s just the way music inspiration comes to you, as years pass?

Kristoffer: I think that in our new album there are some melodies. Also melodies can be found in all of our albums, but with a different approach. In “Vittra” for example melodies are at the front of the compositions, very easy to understand. As the years pass, we prefer to use different kind of melodic lines, “darker” someone would say, combined of course with extreme metal music.

– You first full-length album “Vittra” is one of the masterpieces in the Melodic Black Metal genre! What can you remember from the recording sessions of that period?

Kristoffer: I remember that despite our young age, we acted very professionally at that time. We were rehearsing almost all of the summer before entering the studio. If I remember well, it was almost every day! At some points, we didn’t have any idea of what we were doing and we exceeded ourselves. Great times, great moments at an era that was totally pure and authentic! Also we had some great live shows at that period!

– Jens Rydén was NALGFAR’s vocalist from the first demo “Stellae Trajectio” till the album “Sheol”. Then, in the album “Pariah”, you stood behind the mic for the first time, as a main vocalist. After all those years, do you believe that this change has affected NAGLFAR’s music character? Were there music disagreements concerning the band’s future and Jens had to leave from the band?

Kristoffer: This is a question that a lot of people have addressed to me in the past. Back in the days, we wrote the music and took decisions together with Jens. He had a lot of ideas in his mind and was involved in many projects. Our perspective about NAGLFAR was kind of different so we had to split parts. After his departure, we didn’t replace him with a new songwriter. However the vision for NAGLFAR remained the same. I believe that our last releases are the most successful ones, so I don’t think his absence has affected us in any way. As far as I am concerned, Jens Ryden will never be a part of NAGLFAR’s plans in the future.

– At 1996 you released the demo tape “Maiden Slaughter”. Can you tell us the story behind this?

Kristoffer: Back in 1996, a Japanese label has asked us to record a song for a tribute compilation to IRON MAIDEN. We chose “The Evil That Men Do” because we love IRON MAIDEN and especially that album. So we went to Sunlight Studios in Stockholm to record this cover. Together with that, we decided to record another two songs and release a three-track demo called “Maiden Slaughter”. The other two songs were “12 th Rising” and one more cover song to Kreator’s masterpiece “Pleasure to Kill”. That demo is actually rare nowadays…

– Any news concerning BEWITCHED? Are you planning to release a new album or start any kind of touring? There have passed 14 years since the last official release of this great band! What should we expect for the future?

Kristoffer: BEWITCHED are still active. We did our first show in 14 years just before the lockdown, at the House of Metal festival and it went really good! We were supposed to do some more live shows during this year, but I don’t think this will happen. Taking into consideration the conditions worldwide, I believe that the whole year will be gone due to the virus. However, we keep on rehearsing together. As everyone knows, my friend Marcus is a member of BEWITCHED so it’s easier for us to work and compose music for BEWITCHED. We’re not signed to any label as we don’t want to be in a rush, producing something that doesn’t represent us 100 %. NAGLFAR has been our main focus over the past few years so it’s difficult to spend quality time for both those bands.

– Is there any possibility to see you live in Greece one day?

Kristoffer: I have a great respect for your country and also my name has a Greek origin. Of course we would like to perform live in Greece but this depends from the organizers at your country. I hope they will ask us to come for the promotion of “Cerecloth” …

– Lastly I’d like to ask your opinion about all this craziness we live with COVID 19. How has this affected your life and how are things in Sweden at the time we are speak.

Kristoffer: I see it from the optimist side. I think that this period is a great opportunity for many people than normally are away from their families due to their work, to dedicate more time to their beloved ones. It’s also the right time to improve ourselves, with things that are forgotten in everyday’s rush, like books. Books are really important to me. The research of new music horizons is also a very interesting thing to do, during all those “free” hours. I also do some hunting, so this keeps me busy for many hours. Generally speaking, it’ll be very interesting to see how society is going to react after all of this….

– Kristoffer, thank you for your answers, please close the interview talking to your Greek fans and our readers worldwide…

Kristoffer: Thank you very much for your questions! I hope that this time we will visit your country! Ask the promoters to invite us and check out “Cerecloth”! It is a new dark and extreme chapter for NAGLFAR and you will definitely enjoy it!