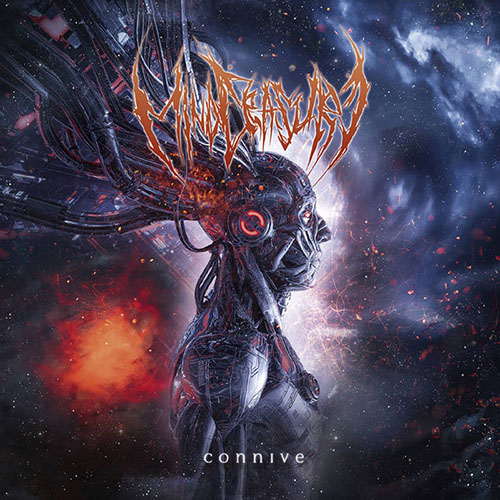 MIND ERASURE from Kerkyra island was founded in 2007. The band has released its first demo in 2013, the second demo in 2016 and “Connive” album has been released recently is their maiden full-album. After the “scourge” that beats almost all Greek bands and is called “frequent change of members”, MIND ERASURE now consists of Lambros Stathis on bass and vocals, guitarist Spyros Servos and drummer Vassilis Koskinas, who was also responsible for the production. After this short CV let’s go and talk about the music…

The opening song “Poem” is a purely organic composition, quite cinematic and pompous, trying to put us in the mood, while the follower “Pray for Salvation” is a rather rhythmic Blackened Death Metal track with torn vocals. “Azrael” starts in mid-tempo rhythm with both female and male vocals evolving in speed and roughness, gradually following Scandinavian paths and ends in an old Doom/Death way as NIGHTFALL presented us the old days. The Scandinavian peninsula makes it’s appearance in the self-titled track while in “Connive” there is an extensive use of choral parts with a strong melody and a cinematic ending.

More or less the same elements can be seen in the rest of the songs until we reach the trilogy “As First Light Never Comes” which closes the album with some BOLT THROWER-ish guitar riffs and the intense usage of keyboards in the footsteps of CRADLE OF FILTH and DIMMU BORGIR, creating a gloomy atmosphere. However, I consider this as a flaw for this album, since I can feel the band being impatient, with a tendency to give all it has without holding “reserve” of ideas. This is unfair for them since it is obvious that a lot of good work has been done in all aspects, the compositions are well crafted and the production is at a fairly high levels. With this release, MIND ERASURE created expectations for something greater and more targeted musically, since they seem to have all the necessary qualifications to achieve it