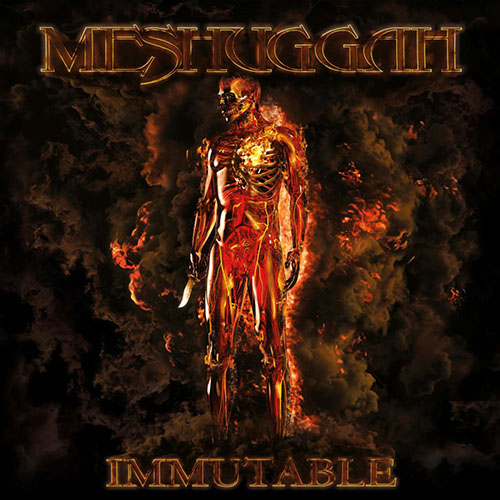 Six years after the awesome “The Violent Sleep Of Reason”, the Swedish gods MESHUGGAH return with their tenth album “Immutable” to show us once again how to play this game.

For those who do not know what MESHUGGAH is, we are talking about one of the most recognizable Metal bands. From very early in their career, the group from Umea, Sweden, showed that they wanted to stand out from all the other Metal bands and they succeeded with flying colours: They created a new genre that influences bands even today, while managing to keep a completely personal and recognizable sound for three decades!

By mutating METALLICA’s Thrash Metal and PANTERA’s Groovy/Post Thrash Metal into a completely mechanical polyrhythmic pandemonium, enriched with semi-Death Metal vocals and jazz solos, the Swedes created a completely alien sound that even today seems way ahead for its time.

“Immutable” finds MESHUGGAH in their most organic phase. The compositions sound more humane and at the same time “catchier” if I may use that phrase. This of course does not mean that the band switched to prog rock with clean vocals. On the contrary, all the features of the group are here. The classic tone on the guitars, the crushing heaviness, the staccato rhythms, the mechanical playing and the screams of Jens Kidman, they are all here. The difference is that this time, the songs seem to have been written by humans and not by cold and inanimate machines!

The album will start off surprisingly with the guitars of “Broken Cog” mercilessly pounding our ears like a gigantic metal piston. What comes next is even more interesting, with tracks like “The Abysmal Eye” and “God He Sees In Mirrors” finding the Swedes more aggressive than ever. Fredrik Thordendal, although officially having left the group since 2017, participates in the album with 6 mind bending guitar leads and solos.

In addition to the classic MESHUGGAH tracks, “Immutable” includes more a few more proggy moments like “Phantoms” and the almost ten-minute “They Move Below” while in “Black Cathedral” the Swedes will make a short stop in the field of Black Metal using cleverly the Tremolo picking technique. Just before the end, another boulder of a song, the “Armies of the Preposterous” in which the band shows for a while its Thrash Metal origins. The closing track of the album, “Past Tense”, is a calm atmospheric track with clean guitars creating a dark and melancholic mood.

Being perhaps the longest album of the Swedes, it is inevitable not to feel that there are some moments that could have been omitted from the final result. Such is the nature of MESHUGGAH’s music that the band’s constant and merciless onslaught can bring about fatigue, as no human ear is made for such a sonic extremity.

Of course, the fact that the band is still thriving after thirty years is an amazing achievement. MESHUGGAH still manage to produce compositions that are full of freshness and youthful momentum, despite their 50+ years. Personally, the album seems better to me than the previous two and if a little trimming had occurred reducing the total duration to give or take 50 minutes, I believe «Immutable» would look «Obzen» straight into the eye.

Ross The Boss – Born Of Fire