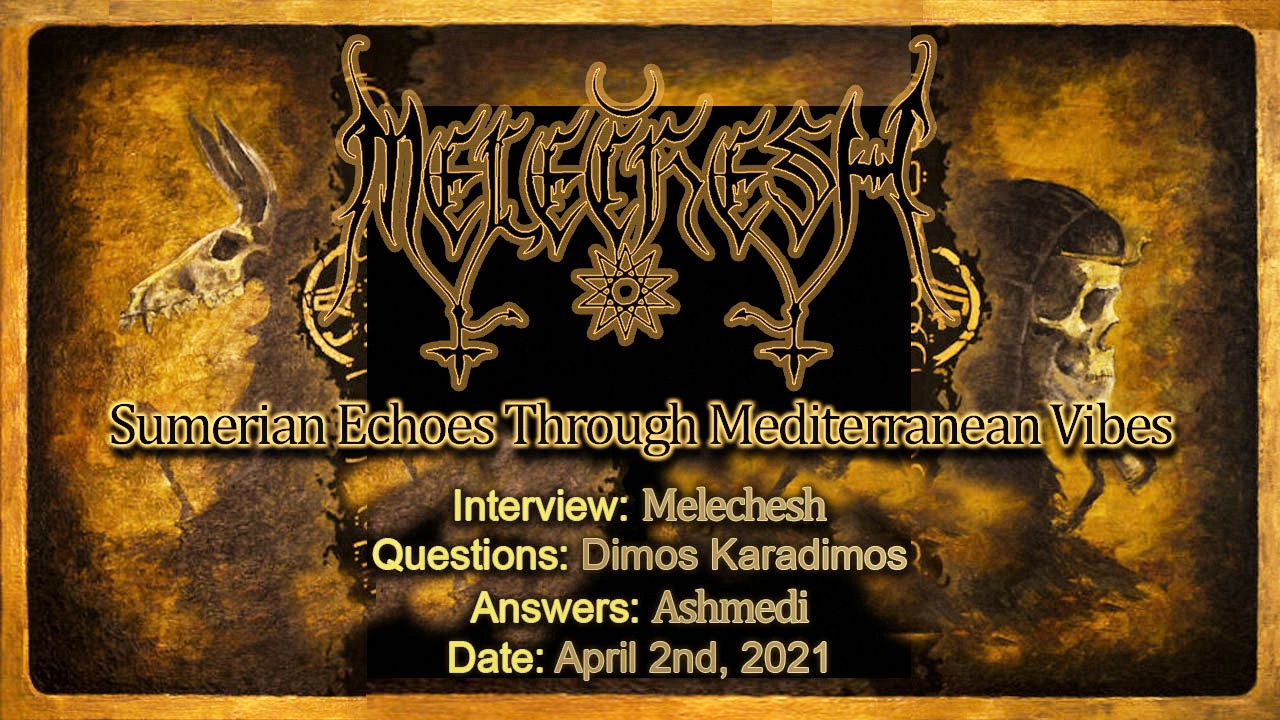 MELECHESH is a unique band with Middle Eastern vibes and a great history! Even though it’s last official studio release was the album “Enki” back in 2015, the singer Ashmedi had the kindness to discuss with us about the present and the future of MELECHESH, answering also at a couple of general topics, in a very interesting and pleasant discussion!

– Hello Ashmedi and welcome to THEGALLERY.GR. I have learned that you had recently a back surgery and you are recovering now.

Ashmedi: I am on painkillers, so I’m ok.

– Well Murat, you told me earlier that you moved back in Jerusalem from Germany due to the COVID 19 pandemic. How do you spend your time there? Practicing in studio? Writing new stuff?

Ashmedi: Well, I ‘ve been coming back and forth the last few years… Touring, then hanging out in Europe between tours or coming back here to Jerusalem. There is nothing to do, no tours and I enjoy having quality time with my family. There are no rehearsals or stuff like that, everything is closed, so I spend my time in the house, just playing, watching movies and writing a lot of material. Hopefully soon, we’ll be able to do some announcements.

– Yes, this COVID 19 thing has made us spend more time with our families. You gave me a nice pass for the next question. It has been almost 6 years since your latest studio album “Enki” and 3 years since “Ghouls Of Nineveh” compilation. It’s quite a long time, so how about some news?

Ashmedi: Haha , let’s talk about this compilation from Japan or wherever it comes from. No one knows what the hell is that… we don’t know, the label doesn’t know, no one really knows so I have no idea what that is… seriously. Well, things always take time with us… I am writing most of the stuff alone, we are touring a lot and, the more you tour, the harder it is to write music. There were some situations in Israel that were really adverse and counter productive. I can’ t promise anything, but things seem to be moving. Today I was on the phone with the label, hopefully we can start with the single as there is no reason to hurry this year, since nothing is really happening with tours.

– At least, as you said, something is moving on. Have you got any idea of the musical direction in your new album? Do you feel like following the same path or do you want to add perhaps some new elements?

Ashmedi: No, it’s not a direction, I am just going with my own feeling and the way I compose. It is a concept, actually the whole band is a concept, so the idea is to sound as MELECHESH as it is today… the feelings have to be very organic, the composition is organic, it’s all about music… don’t forget there has to be the rnr element, its heavy metal, its real music… guitar, drums,bass. There is not a plan, I leave it to be natural. We got a lot of songs so far and they sound like MELECHESH!

– I understand what you mean. Some people, especially the press, calls you “Sumerian” or “Mesopotamian” Metal. I would disagree and say that you play Death-Black Metal with Folk elements coming from Middle Eastern mythology. What’s your opinion about that?

Ashmedi: These are many words to describe music. Try to describe flavor or food, it’s difficult so these terms are an indication of the lyrical message within the metal music. We’ re like Black/Thrash, you call it Black/Death but I say it’s our music with our own regional sounds. I was one of the first to incorporate these Middle Eastern drums on the songs because they sound tribal. Heavy Metal music is also tribal in a way. Well, Mesopotamian mythology, Kabbalah and the region has a lot of mysticism. I consider myself as Mediterranean, so these are the words to describe the sound. If you want to print something, you need something to describe it to other people, to put some words that can’t spell the flavor of sound. It’s possible but in the end you have to listen to it…

– So I  assume that you still have a contract with Nuclear Blast. How does it feel to be under the wings of such a big metal label?

Ashmedi: Yes, we still are and we were talking to the phone about future plans.Well, it’s pretty much the same, in the sense that they let us do whatever we want to do without interfering in our music. They actually have a bigger reach I guess and that’s the whole point. When you do music, you want the biggest reach possible because you put your focus, your dedication, your passion into this stuff, so you want that message or music to be accessible. That’s the biggest difference with other labels.

– Of course, your music should be something unique in order to sign a contract with them. Now, “Enki” was recorded in Greece with the assistance of Fotis Bernardo and George Bokos. You have also toured with Greek bands so do you feel familiar with the Greek metal scene?

Ashmedi: Obviously, there are some killer Greek bands… we have toured with ROTTING CHRIST, SEPTIC FLESH and I have good acquaintances there. Besides me being of Armenian and Assyrian heritage, my family comes from Turkey and are Christian, Armenian, Orthodox… we pretty much have the same culture. I love being in Greece, I feel like home and I am aware of what’s going on there as I know other bands like NIGHTRAGE.  There is always good stuff coming from Greece as it produces good music with a certain level of passion. It’s cool and I look forward coming back there. Last time I was there when I performed vocals for the last ROTTING CHRIST album. I was on my way back from Europe to Jerusalem and I stopped in Athens… Fotis picked me up from the airport and we had dinner with Sakis. The next day I did the vocals and flew to Jerusalem, so that lasted only 24 hours.

– You have performed twice in Thessaloniki, in January 2011 with NILE and in September 2011 with SAMAEL and KEEP OF KALLESIN. I attended both shows and I was impressed by your energy on stage. It was a strong experience. What happened and you didn’t manage to play live in Athens, as most of the bands do?

Ashmedi: I remember those Thessaloniki gigs (it is a beautiful city I must say), the fans were awesome and we had a great response. Why we didn’t play in Athens? Well, I don’t know, maybe nobody invited us. We played in Colombia in front of 100.000 people, we made a complete tour in Mexico, we have been to Dubai a few times, in Europe countless times (every city almost 10 to 15 times), we have toured in America, Canada but really not being able to perform in Athens. But you have to understand that we ‘re on Massive Music, a touring company, and they don’t go all the way down to Athens, they just turn and go to other regions. Oddly enough  last year, when ROTTING CHRIST made a special concert in Athens, Sakis called me and said “Bro, I want  you and MELECHESH to play with us in Athens”. But we were on European tour with W.E.B, another great Greek band, so we were unable to come to Athens. I ask myself the same question, that’s a shame. So we have to change that and demand MELECHESH to play in Athens or the Ancient Gods will destroy the Earth!!! 🙂

– Sounds like an ominous curse upon Athenian metalheads. You have toured  around the world many times as you mentioned. Is there any peculiar or weird story you want to share with us?

Ashmedi: There are too many, we would really never finish talking. There is a lot of crazy stuff, maybe it’s better not to talk about it, trust me….

– You mentioned before that your heritage is Mediterranean. Which fans do you feel are closer and more dedicated to MELECHESH?? The Mediterranean, the European or the Americans?

Ashmedi: First of all, the metal community is a sub-culture on it’s own and sometimes it is stronger than your own regional culture. For example, a Brazilian metalhead has more in common with a German metalhead than a German metalhead has with his neighbours. Everywhere we go, I feel the same response from the fans and it is a rather unifying factor.

– How difficult it is for a person like you, who runs the band almost alone without permanent members (ps. except Moloch, who is only for the studio recordings) to impart your vision, your aspect and your feelings about your music to the session musicians?

Ashmedi: Well it’s not easy, but don’t forget I don’t have a country, I am a nomad my whole life. Keeping that lifestyle is not easy and when you want to play live, Rule No 1 is to have cool people, but sometimes you have to deal with toxic people, it’s not easy. It’s the common problem of all these people who write and compose music. There are a lot of posers out there, that they just want to play live and the first thing they practise is a pose on stage. There are bands that they haven’t changed their line-up for almost 20 years, their members live in the same place and they tour once in a five year for vacation. It’s not easy to tour on this level, people have their responsibilities, paying bills so it is a complete challenge. It’s like running a pirate ship  I suppose, a bunch of crazy fuckers. Touring is the biggest challenge and if you don’t tour, then there is no problem.

– You mentioned earlier that you are a nomad, a global citizen. Do you see yourself  in the future settling down in a permanent base or do you fell like touring till the age of ROLLING STONES!!??

Ashmedi: Well, being a nomad is not connected with my band. I have lived in many places… Senegal, Los Angeles, Miami, Holland, Germany, obviously Jerusalem… I have spent extended periods of time in many countries and I like it. I think there is a German word for it,  “Wanderlust”, describing people who feel like moving on constantly. With MELECHESH I won’t be able to tour like ROLLING STONES for countless reasons… first of all, the whole financial machinery around them and our music is not as mellow as theirs. As you can see, I already had a surgery in my back….we’ re getting older! Settling down one day is unfamiliar to me, but the idea of having the same place it’ s ok. For me it is a consideration, but I will keep on exploring new places, I guess it is written on my fate.

– Well, we’ re reaching the end. I would like to say it was an honour and pleasure for me having this kind of conversation with you. On behalf of THEGALLERY.GR, we wish you to get well soon and hit the road as soon as possible!

Ashmedi: Well, last words… “Malakas”, “yeia mas” actually. Thank you very much, it was a pleasure speaking with you. I am looking forward being on the road again and coming to Greece soon… get to see good people there, good food, ouzo, fine wine! You guys keep on rocking and I hope to see you soon. Thanks for this little talk…”efxaristo poly”!