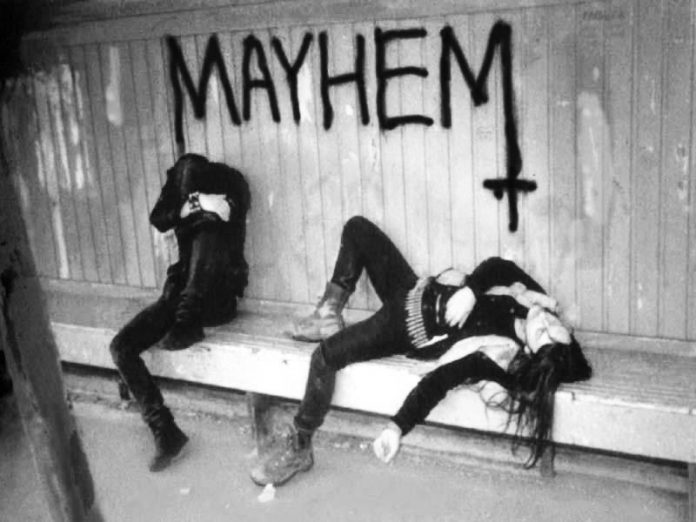 Limits. Some enforce them, some respect them and there are some who will never know what they are. Just like the heroes of today’s story, no compromise, just chaos in the Black Metal scene was their guide and saviour. Maybe a more fitting title would be “A Series Of Unfortunate Events” …

The time capsule travels us to 1984 and we teleport to Oslo, Norway. It could be the cold currents, the priest’s talk that was never taken seriously or the need for rebellion and the dark clothes that cladded their souls and not only our leading characters’ outfits.

The initial composition of the band was Øystein Aarseth on the guitar, under the nickname of Euronymous, Jørn Stubberud, also known as Necrobutcher on the bass and Kjetil Manheim on the drums. A while before Dead’s appearance, who would haunt the band’s history, Nils Svensson was responsible for all vocals, followed by Stele. They would be replaced by Maniac, who also saved the band after Dead’s death. In all this chaotic layout a honourable mention goes to Kittil Kittilsen, who had been MAYHEM’s singer from 1987 until 1988, joining the band after Maniac left and stayed until Dead’s addition.

Their influences, according to them, were bands like VENOM, MOTORHEAD, SLAYER, BLACK SABBATH and BATHORY. Everything seemed “ideally” dark, what could go wrong?

The band was in the process of finding the perfect frontman. The one who would fit to the image they wanted to have, the one to skyrocket their scenic performance. And they did find him, but he did not last long…

Chapter One: You cannot be more Dead than that…

Dead looked too good to be true. He had the whole package, but with it came an abundance of personal and psychological issues.

Per Yngve Ohlin (also known as Dead) had such an obsession with death that the underworld would envy him and do everything in its power to stay connected and in touch with him.

He would sniff dead animals to keep death’s scent in his nostrils, he would bury his clothes in the dirt and dig them out a few minutes before going on stage, as he wanted to present himself as a corpse. He did not hesitate to injure himself during live shows and he would throw chunks of dead animals to the crowd.

Stian Johannsen “Occultus”, who took over the vocals after Dead’s demise, had said about him that “He did not see himself as a human, he thought he was a being from another world. He had many visions, he believed that the blood was frozen in his veins, that he was dead. He knew he was going to die”.

Many tried to understand him, but it was probably unnecessary. Why analyse it when you have in front of you the person that brings your darkest fantasy to life, without even asking him to do so?

Dead stayed with the band from 1988 until 1991, until the fine morning of the 8th of April 1991, when he decided to end his life in a way that would make Alfred Hitchcock flee in terror. Dead’s depression was on its peak, and, feeling only hatred and contempt for this poor world, he sliced his wrists, cut his throat and, because he was probably not entirely sure about the positive outcome of his actions, he shot his brains out with a shotgun. The note that was found next to him started “Sorry about the blood” and continued “Nobody will understand me, but as a brief explanation, I am not human, this is a dream and I am about to wake up” …

What he probably never imagined was that Euronymous would pick up his camera and take a few photos for the band’s family book.

Oh! He would also take a few pieces of his skull to make necklaces, so that the other members of the band could wear them during their shows, like good luck charms. Do you think this is morbid? But, wait, there is more…

One of photos in discussion would be the cover of MAYHEM’s live bootleg “Dawn Of The Black Hearts”, released on the 17th of February, 1995. I will not even say anything about the photo, you know Google and you know your stomach, happy hunting.

Chapter Two: Show me your friend and I will tell you who you are not.

A while after Dead’s suicide things got a bit weird and, naturally, members started to quit. Necrobutcher decided to walk to avoid killing someone (as we have heard in one of his most recent interviews) and the band continued their rehearsals with Occultus doing the vocals, while they started recording the album “De Mysteriis Dom Sathanas”. All this joy was very short lasting as Occultus called it quits after Euronymous threatened to kill him. What a sweetheart.

At the end of 1992 we had two new additions to the “Young and Restless” serial of a band. Attila Csihar of Tormentor and Varg Vikernes (Count Grishnackh) of Burzum were the newest recruits, with the last one writing the fatal act in MAYHEM’s story.

Varg would try to take everything a step further and make a difference, something that would not seem very exciting to someone that wanted to keep the band’s reigns. After all, in 1993, Euronymous had made some serious business investments, creating Deathlike Silence Productions and opening Helvete record store.

But what divides music from reality? Where does a person’s psychosynthesis stop, so that he may be able to tell right from wrong? Where are the limits we mentioned earlier?

In the events that followed, Varg decided to torch anything with a cross on it. He burned every church that stood in his path and, surely, made every fan of the band raise their glass to his name. Up until January of 1993 he had burned at least seven central churches, while he dared to burn one on Christmas day of 1992. He never accepted his actions as satanic, on the contrary, he regarded them as a “revenge” against Christianity and its influence.

Chapter Three: The Murder of Euronymous.

At the start of 1993, the police and the media had started to pay a lot attention to Helvete and the band, so Euronymous decided to shut up shop.

There was a lot of hostility between Vark and Øystein, and the relationship between the later and the Swedish Black Metal scene was on a tight rope.

On the night of the murder, Varg drove with Blackthorn from Bergen to Oslo. Blackthorn stayed in the car and Varh went upstairs by himself, to face Euronymous.

On the 10th of August 1993, Varg stabbed Øystein to death in his apartment in Oslo, although he declared that he was in self-defence after a very violent argument that broke between them. On the 19th of August 1993 he was arrested and convicted to 21 years in prison, not just for the murder but, as we have mentioned, he had not left a single church “undecorated”.

Chapter Four: And Now What?

After the murder, Hellhammer and Necrobutcher decided to continue with the band and work on the release of “De Mysteriis Dom Sathanas”.

There are many opinions and countless speculations as to the true nature of the incidents before and after. No-one can know for sure, besides the ones that lived it. Euronymous’ family asked Hellhammer to remove the parts where Varg could be heard playing the bass, but he never followed that request. The album was officially released in May of 1994 with Euronymous on the guitar and Varg on the bass.

For a number of people out there, Varg is regarded as traitor, even to this day, because he killed Euronymous and there are many who have sworn to avenge his untimely death. His loss is considered to be particularly felt in the Black Metal scene.

The truth is that I wanted to see it for a long time and I always postponed it. I was under the impression it would be a b-movie, but it was a pleasant surprise.

There are certainly some inaccuracies and there will certainly be many declaring for or against everything that is depicted. Moreover, one of the two main “protagonists’” family is behind the production, so we only see one side of the coin. It is always good to see both sides. In any case, the intro suggests that the movie is based on truths and lies. Who was the “good guy” of the story and who was “the villain”? Is it possible that some stories only have “bad guys”?

Watch the movie, it will not disappoint you. All the theories and the facts would make Tolkien’s Silmarillion look completely straight forward and easy to understand.

In conclusion, we realize that the story sometimes unfolds before us, for us. In MAYHEM’s story, which continues strong until this day, there are wrongs and rights which we can analyse for hours on end and argue about them indefinitely.

The sure thing is that two are in the grave and one in jail, so something went very wrong. Maybe some people live their style a lot more than what they should. Besides, limits never hurt anyone…