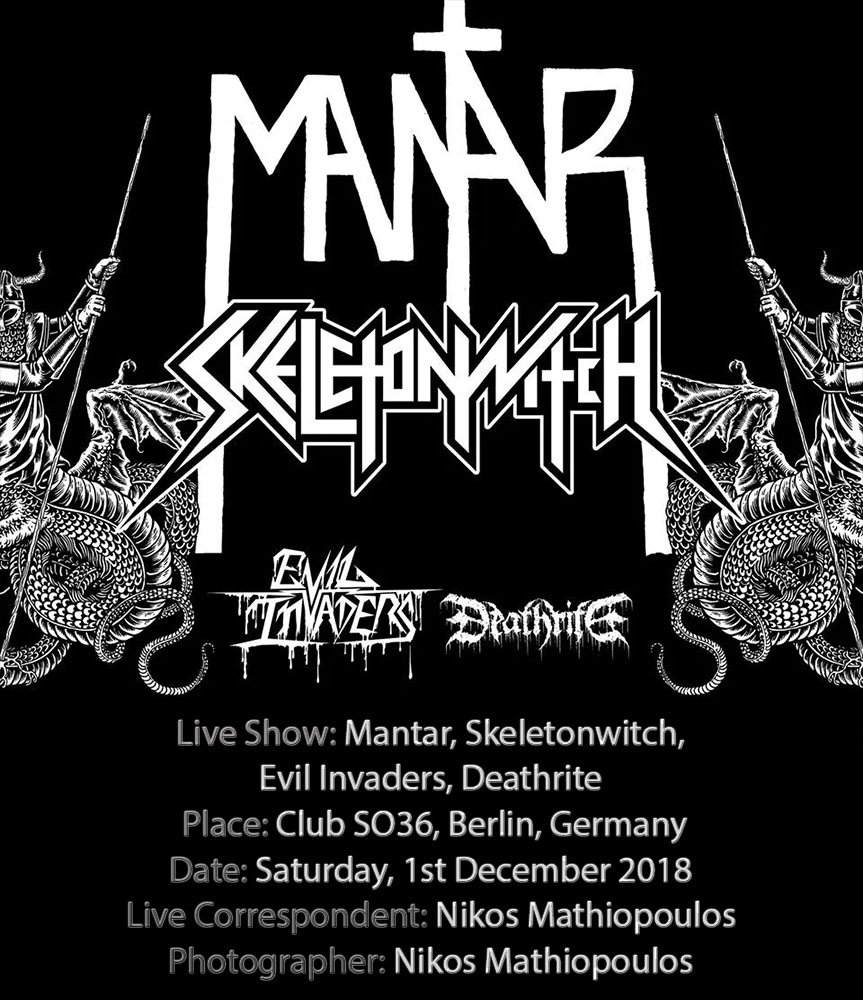 A “warm-up show party” before the forthcoming SLAYER’s gig in Berlin, was about to happen. We were going to enjoy SKELETONWITCH with MANTAR as headliners at the SO36 Club in the capital of Germany.

The show was sold out. Unfortunately, due to lack of time we did not get to see the first two support bands. In the club there was a variety of German people who did “foolish things” all the time. It was hilarious (fellas, we also drink alcohol but we do not act like that!). Okay, I will not stay too much on it…after all, we live in a touristic country so we are used in that situations! As for the club, it was also quite oblong and with a great lack of organization in the wardrobe, resulting on very a big queue and longing in the end.

Fortunately, SKELETONWITCH were really balanced by their very dynamic stage presence and their very good sound quality. Generally, I did not follow them very much, I knew it was a Black Metal band but I was surprised realizing that they were playing a mixture of Swedish Death Metal (AT THE GATES’ style) with several core elements and maiden touches! I liked them, for what they did on stage! It seemed that they enjoyed it even more…worth looking!

Unfortunately, I cannot say the same about MANTAR. Despite the fact that they have tremendous albums that make you looking forward to see them live, you felt something different while they were on stage: “a lot of noise for nothing”! Maybe it had to do with their bad sound (put the blame on the club for that) or maybe it had to do with the “stuffy” place or the exaggerated performance of their guitarist/bassist/singer (duet band)…The result was lukewarm and boring with the exception of the last three songs (“Praise the Plague”, “Cross the Cross” and “Era Boreallis”) that became a blast, especially in the latter. Of course, the German kids in front of me had a rather opposite idea, because they were constantly flattening. Surely it has to do with music taste, but SKELETONWITCH were “true” in their totality and not a fake hype.

Summing up, we did not live the absolute “warm up show party” for SLAYER’s concert, but let’s not be ungrateful! We were in a nice city (that you do not travel every day), we saw two interesting bands of Extreme Metal sound that may never visit our country and ultimately, it is important to go well, wherever you are… Undeterred, we continued our descent into the underground bars of Kreuzberg…!