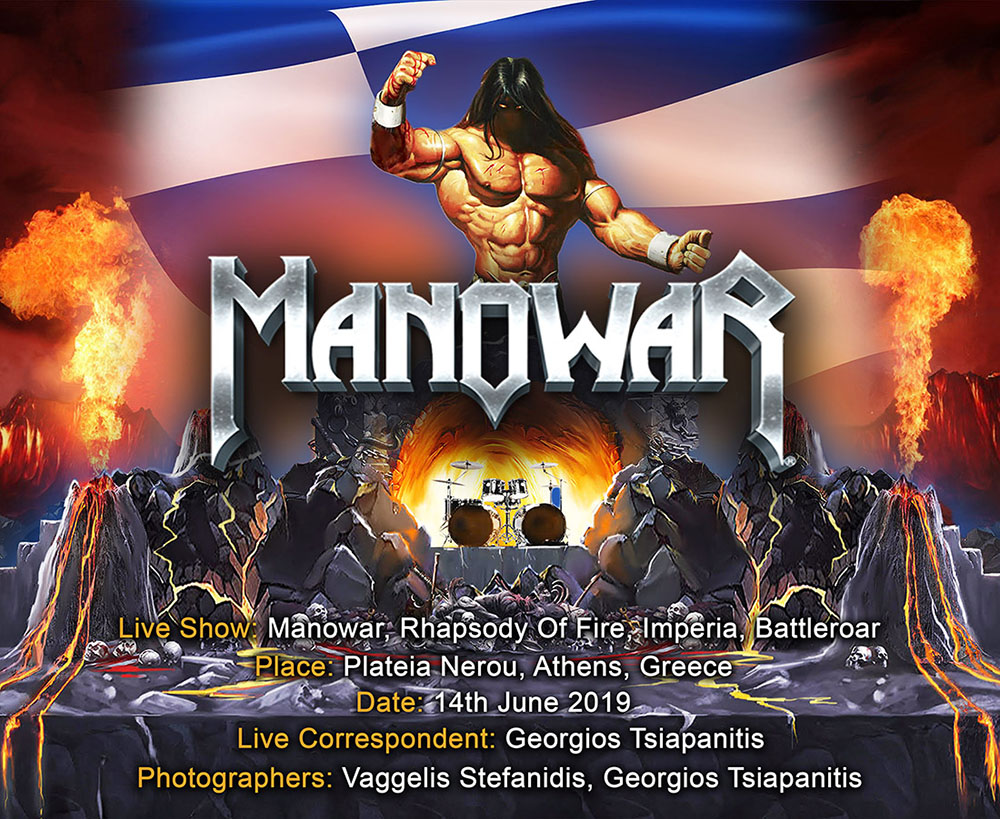 It’s the beginning of June. The Greek metal audience was informed by November for the return of the legendary MANOWAR at the capital’s territory, after 12 years. They would participate at Release Athens Festival. Metal fans from all over Greece (and other countries) came to the festival with buses, planes or other ways…They started their journey in the morning to be on time at the concert’s place…the heat was unbearable but the fans didn’t seem to bother at all. And the concert starts!

BATTLEROAR opened the festival with the riffs of “Hyrkanian Blades” and the voice of Yiannis Papanikolaou member of Diviner, who took the place of their former singer. Unfortunately they played only five songs from their entire career. Next band was the symphonic metallers IMPERIA.

The metal fans had already gathered in the festival’s area and the atmosphere was full of excitement and power. Next band of the festival was RHAPSODY OF FIRE from Italy who promote their new record “The Eighth Mountain”. Some of the fans were dissatisfied as all RHAPSODY members have been replaced, except Alex Staropoli who is the only founding member of the band. The new members gave their best and they played songs from band’s entiry discography. They started with “Ιn principio” intro and continue with “Distant Sky”. They played songs from the new album and the fans loved it! RHAPSODY left the stage with the melody of Alex Staropoli’s keyboards to everyone’s ears.

Almost an hour after RHAPSODY had finished their set, the festival’s area was full of MANOWAR fans. Suddenly, the intro “March of the Heroes into Valhalla” was heard from the speakers! The crowd got crazy and Boommm!!!! MANOWAR were on stage with the self-titled track “Manowar” starting the show! The sound of the drums from “Warriors of the World United” was then heard, with all the fans singing the lyrics.

Next song “Blood of my Enemies” and the audience was going up and down, jumping and singing at the same time! The band offered us a great live experience with songs from their entire career. 18 songs in a concert that lasted more than 2 hours, a heavy sound mixed with the majestic Eric Adams’ voice. Of course in a MANOWAR’s concert you couldn’t miss two things: Joey De Maio’s solo bass and of course a reason for it! The words are unnecessary for the solo, so let’s continue with his speech…He referred mainly to the Greek metal audience and the support the band received all those years from them.

It was my first presence in a big metal event in Athens! Due to the fact I come from Imathia, a city in Macedonia-Greece, I usually have easier access to concerts that take place at the northern part of the country. This time I decided to travel to Athens and see this great band! My decision was proved to be right, cause I was totally pleased from this event! The acoustic of the place and the sound of the bands was perfect! On the other hand, the Greek audience had an aura that “magnetized” you and gave you goosebumps at the same time. Release Athens Festival 2019 has been completed, “heavy & noisy” as it should! Let’s see what they will have to give us next year…